Nothing rages against the dying of the light harder than a star. Their death throes are wild and violent as the star is wracked with colossal quakes, throwing vast amounts of stellar material out into the surrounding space.

Studying the gas and dust thrown off in such events can help us understand how these stars die… and now Hubble has studied in greater detail than ever before two of the dustiest, gassiest star deaths in the galaxy.

They’re two planetary nebulae (so named because initially, these objects were first described as planet-like in the 18th century) called NGC 6303, or the Butterfly Nebula, and NGC 7027. And Hubble has used the full wavelength range of its Wide Field 3 camera – from near ultraviolet to near-infrared – to study the turbulent processes within them.

“When I looked in the Hubble archive and realised no one had observed these nebulae with Hubble’s Wide Field Camera 3 across its full wavelength range, I was floored,” said astronomer Joel Kastner of Rochester Institute of Technology in New York.

“These new multi-wavelength Hubble observations provide the most comprehensive view to date of both of these spectacular nebulae. As I was downloading the resulting images, I felt like a kid in a candy store.” 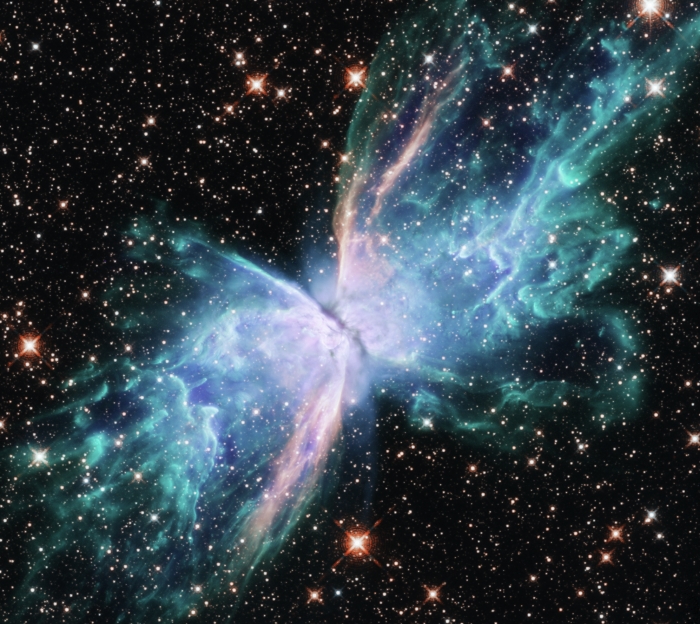 Both nebulae are probably descended from progenitor stars around three to five times the mass of the Sun; these progenitors collapsed into white dwarfs when they died. (Stars more massive than eight solar masses become neutron stars; and stars greater than 30 solar masses become black holes.) And both have high ionisation and excitation, indicating the stars inside them are very hot.

Additionally, the two nebulae have some very interesting characteristics – bipolar, lobed structures flowing from a narrower centre that indicate some complex interactions once occurred in the hearts of those brilliantly glowing clouds.

The new, high-resolution images have enabled astronomers to study the shocks generated by periodic stellar winds slamming into the slower-moving dense clouds. These create cavities and walls in the nebulae that can be analysed to infer its dynamical history.

Although the two nebulae look quite different, astronomers believe that the lobed structures of both were created by the same dynamic: two stars in a binary system, locked in orbit around each other. The material lost by the dying star can then be swept up in an accretion disc around its companion star, and launched into space in each polar direction by astrophysical jets generated by the accretion disc.

Another possibility is that the two stars merged, producing wobbling jet outflows that created patterns like those seen in the Butterfly Nebula.

“The suspected companion stars in NGC 6302 and NGC 7027 haven’t been directly detected because they are next to, or perhaps have already been swallowed by, larger red giant stars, a type of star that is hundreds to thousands of times brighter than the Sun,” said astronomer Bruce Balick of the University of Washington.

“The hypothesis of merging stars seems the best and simplest explanation for the features seen in the most active and symmetric planetary nebulae. It’s a powerful unifying concept, so far without rival.”

Some other interesting structures were observed. In the Butterfly Nebula, the Hubble’s near-infrared capability picked out an S-shape (visible in pink), a bit like a lawn sprinkler, created by ionised iron atoms. These atoms are ionised when slow and fast stellar winds collide, but such spirals are rarely seen in planetary nebulae. The spiralling outward plume indicates that the source of the faster wind is wobbling.

NGC 7027 could be even more wild. The observations indicate that it was quietly doing its thing until fairly recently – and then something changed.

“In some respects, the changes within this nebula are even more dramatic than those within the Butterfly,” Kastner said. “Something recently went haywire at the very centre, producing a new cloverleaf pattern, with bullets of material shooting out in specific directions.”

The team believes that “something” could have been a smaller star being engulfed by a red giant, although it’s impossible to assert at this point. Follow-up analyses are currently being conducted to try and narrow it down.

The research has been published in Galaxies.

What Would Dinosaurs Look Like Today If They Never Went Extinct?
Forests at Risk of Burning an Extra 30 Days a Year Without Climate Action
Crocodiles Seem to Be Thriving in a Toxic River That’s More Like a Sewer. Here’s Why
Ancient Traces of Burnt Food Reveal a Surprising Truth About The Paleo Diet
These Mysterious Fungi Belong to an Entirely New Branch on The Tree of Life