Our planet Earth is a mote of dust in the cosmos, carrying its precious cargo of all the life we know exists in the Universe, sailing a sea of stars.

It’s easy to forget that, even when standing under a sky studded with glittering, distant fire. But a new photograph from European Space Agency (ESA) astronaut Thomas Pesquet is a spectacular reminder.

From the Cupola of the International Space Station (ISS), he has managed to image the night side of Earth, wrapped in its luminous, ethereal atmosphere, with shining lights of human habitation against a background of glittering stars.

“A few night pictures from the Cupola: sometimes star lights battle it out with city lights for who’s the brightest and more beautiful,” Pesquet wrote on Flickr. “I’m just lucky to get to be the judge.” 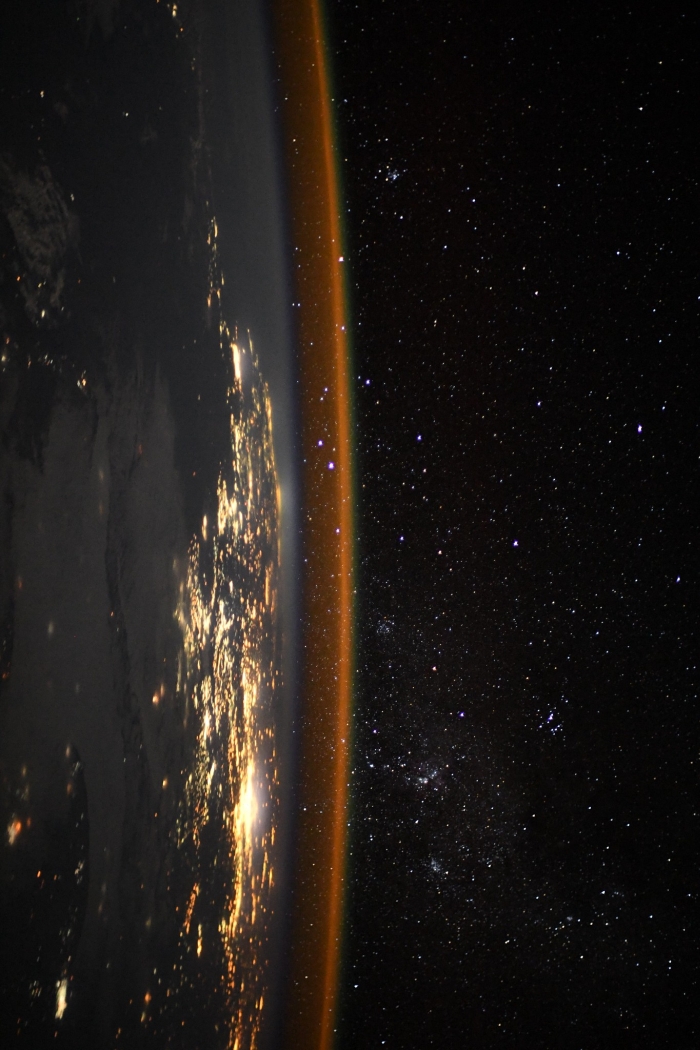 The glowing atmosphere, not mentioned by Pesquet, is also astonishing. It’s called nightglow, and it’s created by natural processes.

Earth’s sky is never completely dark, not even at night, and not even once you’ve extracted light pollution, starlight, and diffuse sunlight. The molecules in the atmosphere are constantly undergoing various processes, which causes them to faintly glow across a range of wavelengths.

Nightglow, which appears at night, occurs when molecules and particles broken apart during the day by solar radiation (a process called photoionization) recombine, releasing their excess energy in the form of photons. On Earth, this occurs in layers – the blue-green layer at the outer edge is oxygen and nitrogen.

At a lower altitude, the red-gold layer is called the sodium layer. This is where meteors break apart, releasing sodium into the atmosphere. Photoionization and recombination of sodium atoms then produces a distinctive golden glow.

This glow is quite subtle, as can be the light of the stars in the background; taking such photos requires quite a bit of patience.

“You need a long shutter time (the shutter needs to stay open to take in as much light as possible, as the scene is very dark), so not only do you as a photographer have to stay extremely still holding the camera, but also the Space Station moves so fast that there will be some motion anyway… the intricacies of space photography!”

Up in space, gazing upon our planet, astronauts often report feeling what has been dubbed the Overview Effect: seeing Earth float in space, radiant and yet somehow delicate, generates a powerful feeling of the connectedness of humanity, and a protectiveness for it.

Although space – and therefore seeing such views first-hand – is out of reach of most of humanity, it’s images like Pesquet’s that can give us some small insight into how that feels.

We Just Got Our Closest View of Europa in 20 Years, And We Can’t Stop Staring
Glass Beads Reveal That Lunar Impacts Echo a History of Catastrophes Here on Earth
Stunning New Pics Capture The Incredible Moment a Spacecraft Struck an Asteroid
Ancient Maya Cities Appear to Have Been Riddled With Mercury Pollution
Mexico’s Earthquake Last Week Created a ‘Desert Tsunami’ in a Distant Cave​​