On 2 July 2019, the Moon cast its shadow on the surface of the Earth. This time, the shadow’s path travelled across the South Pacific Ocean. It also passed over some of Argentina and Chile. For surface dwellers in the path, the Moon briefly blocked the Sun, turning night into day.

But for one “eye” in orbit around the Moon, the view was different. A camera on a tiny satellite watched as the circular shadow of the Moon moved over the Earth’s surface.

The satellite is the Chinese Longjiang-2. It’s a tiny microsatellite launched in 2018 as part of the Chang’e 4 mission.

Longjiang had a sibling, Longjiang 1, which failed to enter lunar orbit. The pair of microsatellites were designed to study very low frequency radio waves from distant stellar objects.

But Longjiang 2 made it into lunar orbit, and it carried a small, student-built camera, called the Inory Eye camera. And that camera recorded images of the eclipse’s shadow as it traversed the Earth. 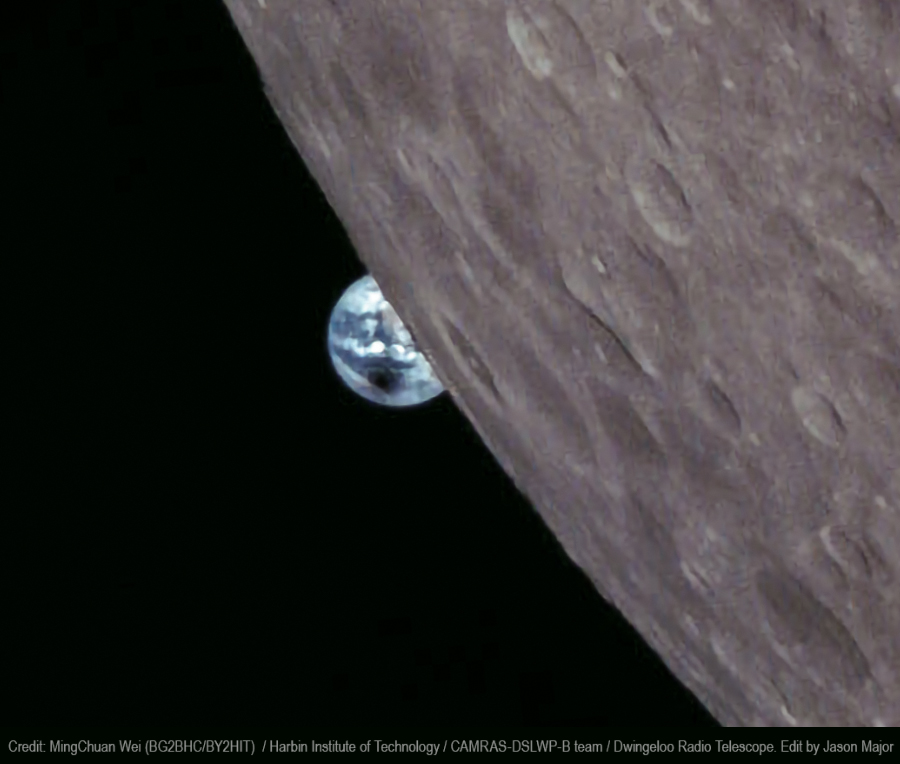 The camera was built by students at the Harbin Institute of Technology, along with a small radio transmitter.

But unlike well-funded, state-run endeavours, the camera, the transmitter, and these eclipse images required a lot of cooperation between amateurs, professionals, and students.

The path of the 2 July 2019 total solar eclipse. (NASA/GSFC/AT Sinclair)

The commands required for the satellite and its camera to take these pictures were planned by MingChuan Wei of China’s Harbin Institute of Technology. They were uploaded to the satellite by a German amateur radio astronomer named Reinhard Kühn.

And receiving the images here on Earth was up to the amateurs who operate the Dwingeloo Telescope in the Netherlands.

There’s only one small problem: the images, in their raw form, have an off-putting purple hue.

Luckily, Jason Major at Lights In The Dark is a graphic designer with a strong interest in all things space-related. He got to work, and gave the Earth and the Moon their natural colors back.

There won’t be any more images from the Inory Eye camera. The Longjiang-2 satellite was crashed into the Moon on 31 July 2019 in a planned impact. The satellite’s mission lasted 437 days.

New DNA technology is shaking up the branches of the evolutionary tree
Robots with flawed AI make sexist and racist decisions, experiment shows
A giant sunspot doubled in size in 24 hours, and it’s pointing right at Earth
Astronomers have identified the most powerful pulsar yet in a distant galaxy
Life has been found in a low-oxygen, super-salty, sub-zero Arctic spring