A year ago, the Great American total solar eclipse evoked awe, wonder and bewilderment, as Earth dwellers briefly had the chance to bask in the shadow of the Moon.

Close to 200 million Americans viewed the spectacle in some way, including roughly 15 million lucky folks who managed to squeeze themselves within the path of totality.

Whether you’re now an umbraphile – someone who chases eclipses – or looking to see your first one, you’re in luck!

Another total solar eclipse is just around the corner, in less than a year, but you’ll have to travel to South America. For the next eclipse in the Lower 48, mark your calendar for April 8, 2024. 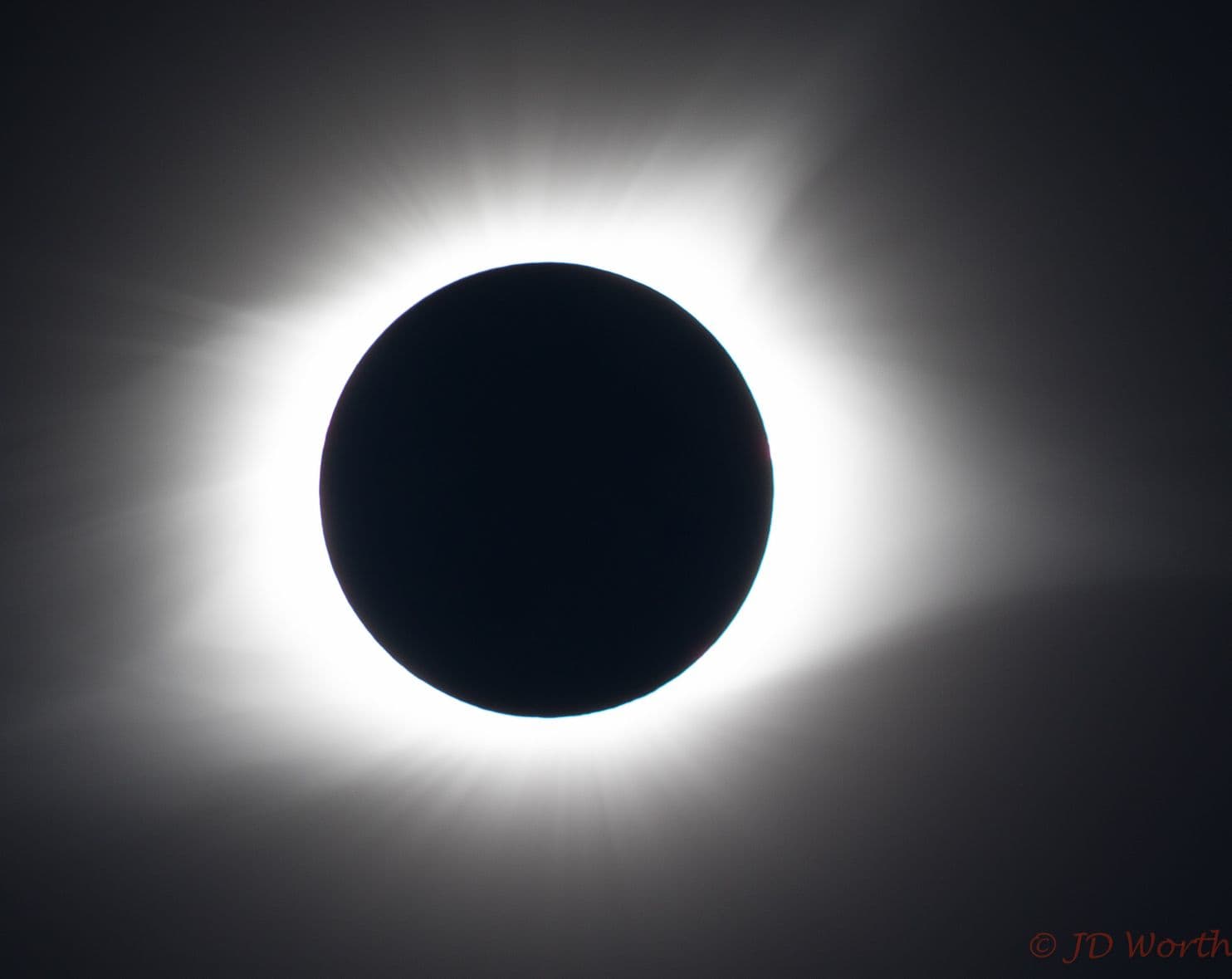 Solar eclipses aren’t terribly unusual: The Moon intersects the Sun’s light once every 18 months on average.

But for any singular place on the planet, to fall into the Moon’s full shadow occurs only once every 375 years.

Earth’s surface is 75 percent water – and many areas on land are remote or inaccessible. Thus, while solar eclipses aren’t rare per se, the opportunity to see a total eclipse certainly is.

The next total solar eclipse anywhere: July 2, 2019, in South America

The next total solar eclipse will take place next year. It will last 4.5 minutes at its peak. The only problem? That happens over the South Pacific.

While Nemo and Dory may enjoy the show, those of us without gills will have to cram into a narrow swath the shadow traces in Chile and Argentina.

La Serena – a Chilean city just 300 miles (483 kilometres) north of the capital of Santiago – lays directly in the path of totality. By then, totality will only persist 2 minutes 35 seconds.

This eclipse will prove particularly tricky to view for a number of reasons. For starters: the low Sun angle. The eclipse will take place at most two hours before local sunset.

That means the Sun will be only 13 degrees above the horizon when totality begins along the Pacific coast of Chile near La Higuera.

While this means the solar corona will blaze a fiery amber color, a single cloud could spoil the view. And the eclipsing Sun will sink lower and lower in the sky the farther east one travels, setting just before people in Buenos Aires would otherwise catch a glimpse.

The other issue? The weather. Late-day eclipses tend to be challenging because weather systems can fuel off the daytime heat and spread cloud cover across the sky.

The best shot at clearing will be on the eastern slopes of the Andes, where sinking air – subsidence – may locally evaporate pesky clouds.

Now if you’re not looking to spend a small fortune or fly halfway across the world next year, you’ll get your chance too – you just have to be a little more patient.

The next total solar eclipse in the United States: April 8, 2024

The next total solar eclipse to sweep across the Lower 48 will be on April 8, 2024. (It’s a Monday, so we recommend talking to your employer now to secure the day off.)

It will begin over the Pacific, first passing through Mexico before tracing a path from Texas to Maine.

This eclipse will be even more spectacular than last year’s.

Why? The Moon will be slightly closer to Earth, meaning it will appear just a bit bigger in the sky.

Because of this, it will block the Sun longer – creating a longer eclipse. It also means the umbra will be 110 miles wide vs. 70 miles wide last year.

That will produce a slightly darker sky, with the 360 degrees sunrise closer to the horizon. The hues will be even more remarkable.

Plus, the path can include more real estate!

Some big-name cities will in the path, including Dallas, Little Rock, Indianapolis, Cleveland, Buffalo, Burlington, Vt., and Montreal. Even outside that list, 50 million people will be within a six-hour drive of the path, making this one of the most-accessible eclipses ever. 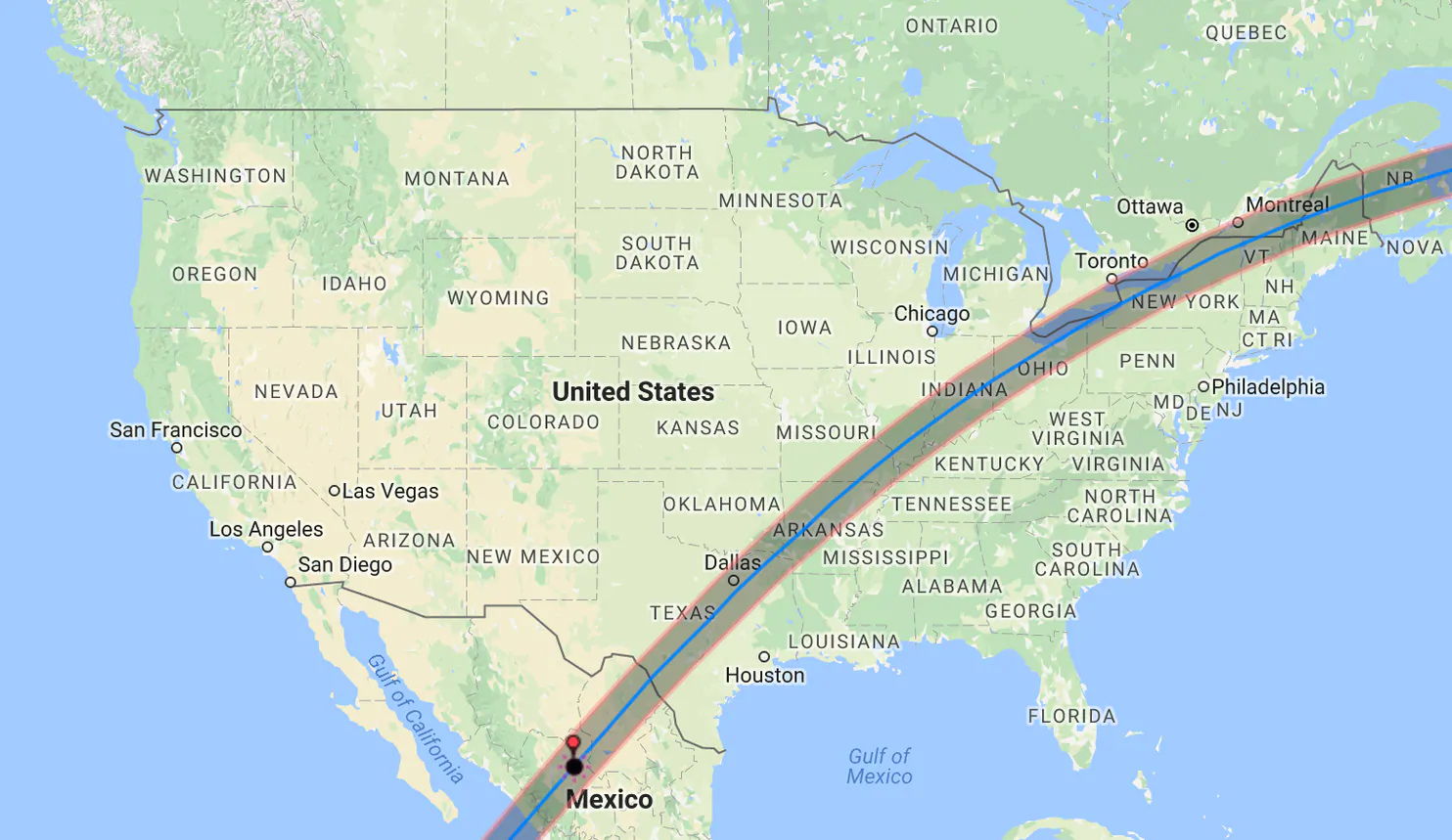 In Texas, several cities will be skirted by totality, making it all the more important for folks to know exactly where they are in relation to the path. Take the Fort Worth Alliance Airport, for instance.

The same is true at Austin-Bergstrom International Airport.

Likewise, if you live on Liberty Road in Aubrey, Texas, you’ll miss out. But walk to your neighbors on Bailey Lane, and you’ll be in luck.

That’s how local the path of totality is, and why it’s so important to be within it. And if you’re at the Walmart off 410 in San Antonio, make sure to shop smart – the produce section is in totality, but the tire department isn’t.

Even Niagara Falls will be in line for an amazing view just after 3:15 pm.

The luminous, milky-white tendrils of the solar corona will stretch overhead the falls, creating an otherworldly scene for just less than 3.5 minutes.

It truly will be “out of this world” – hence why it’s been my plan for many years to be married there on that day during totality. No stealing my idea!

This May Be The Oldest Example of a Brain, And It’s Not What We Expected
Man Keeps Rock For Years, Hoping It’s Gold. It Turns Out to Be Far More Valuable
More Strange Cosmic Threads Discovered Outside Our Galaxy, And They’re Huge
Roman Coins Once Thought to Be Fake Reveal a Long Lost Historical Figure
There’s a Weird Link Between Teeth And The Evolution of Pregnancy