Gravity is the weird, mysterious glue that binds the Universe together, but that’s not the limit of its charms. We can also leverage the way it warps space-time to see distant objects that would be otherwise much more difficult to make out.

This is called gravitational lensing, an effect predicted by Einstein, and it’s beautifully illustrated in a new release from the Hubble Space Telescope.

In the center in the image (below) is a shiny, near-perfect ring with what appear to be four bright spots threaded along it, looping around two more points with a golden glow. 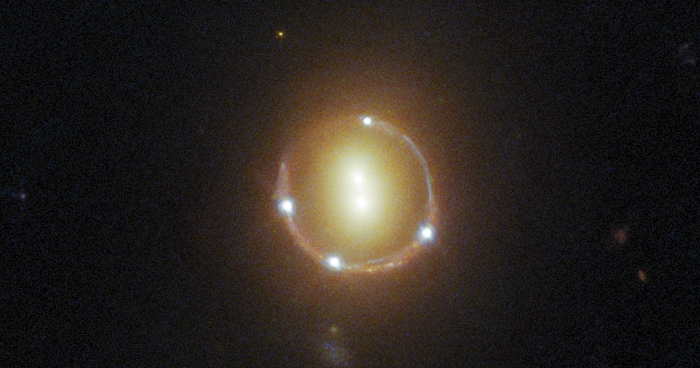 This is called an Einstein ring, and those bright dots are not six galaxies, but three: the two in the middle of the ring, and one quasar behind it, its light distorted and magnified as it passes through the gravitational field of the two foreground galaxies.

Because the mass of the two foreground galaxies is so high, this causes a gravitational curvature of space-time around the pair. Any light that then travels through this space-time follows this curvature and enters our telescopes smeared and distorted – but also magnified. 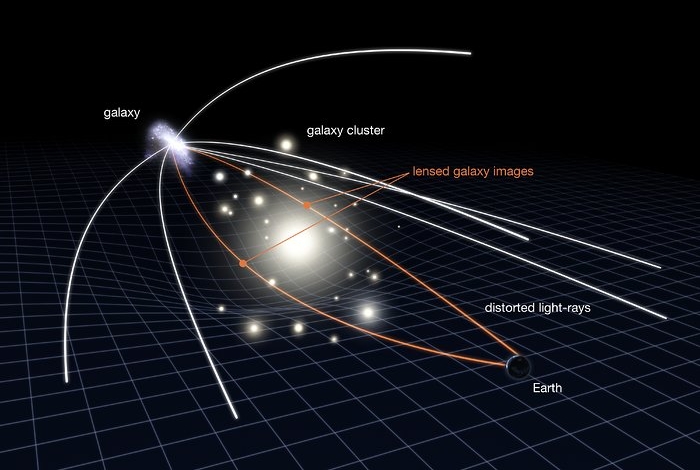 This, as it turns out, is a really useful tool for probing both the far and near reaches of the Universe. Anything with enough mass can act as a gravitational lens. That can mean one or two galaxies, as we see here, or even huge galaxy clusters, which produce a wonderful mess of smears of light from the many objects behind them.

Astronomers peering into deep space can reconstruct these smears and replicated images to see in much finer detail the distant galaxies thus lensed. But that’s not all gravitational lensing can do. The strength of a lens depends on the curvature of the gravitational field, which is directly related to the mass it’s curving around.

So gravitational lenses can allow us to weigh galaxies and galaxy clusters, which in turn can then help us find and map dark matter – the mysterious, invisible source of mass that generates additional gravity that can’t be explained by the stuff in the Universe we can actually detect.

A bit closer to home, gravitational lensing – or microlensing, to be more precise – can help us find objects within the Milky Way that would be too dark for us to see otherwise, such as stellar-mass black holes.

And it gets smaller. Astronomers have managed to detect rogue exoplanets – those unattached from a host star, wandering the galaxy, cold and alone – from the magnification that occurs when such exoplanets pass between us and distant stars. And they’ve even used gravitational microlensing to detect exoplanets in other galaxies.

It’s pretty wild what the Universe has up its gravitational sleeves.

Sword Mistaken For Replica Is Actually An Ancient 3,000-Year-Old Weapon
Mysterious White Clouds Keep Popping Up Near The Bahamas, And No One Knows Why
These Binary Stars Are So Close Together That Their Year Is Only 20.5 Hours Long
Bacteria Can Use Plastic Waste as a Food Source, Which Isn’t as Good as It Sounds
New NASA Nuclear Rocket Plan Aims to Get to Mars in Just 45 Days