In its 4.6 billion-year-long history, Mars has taken its fair share of punches from hurtling asteroids and careening comets.

Today, the surface of the red planet is covered in no less than 43,000 impact craters larger than 5 kilometres; some ancient regions have received more of a beating than others.

In the ancient Martian highlands of Noachis Terra – a region heavily impacted roughly 4 billion years ago – astronomers have spotted a triple whammy crater made of three overlapping basins.

This natural Venn diagram of depressions is not as big as some other craters in Noachis Terra, some of which can span nearly nearly 140 km (87 miles) across, but the smallest crater of the lot is still an impressive 28 kilometres wide.

And that’s just one of the ancient imprints. With a little overlap, the largest adds another 45 km across. 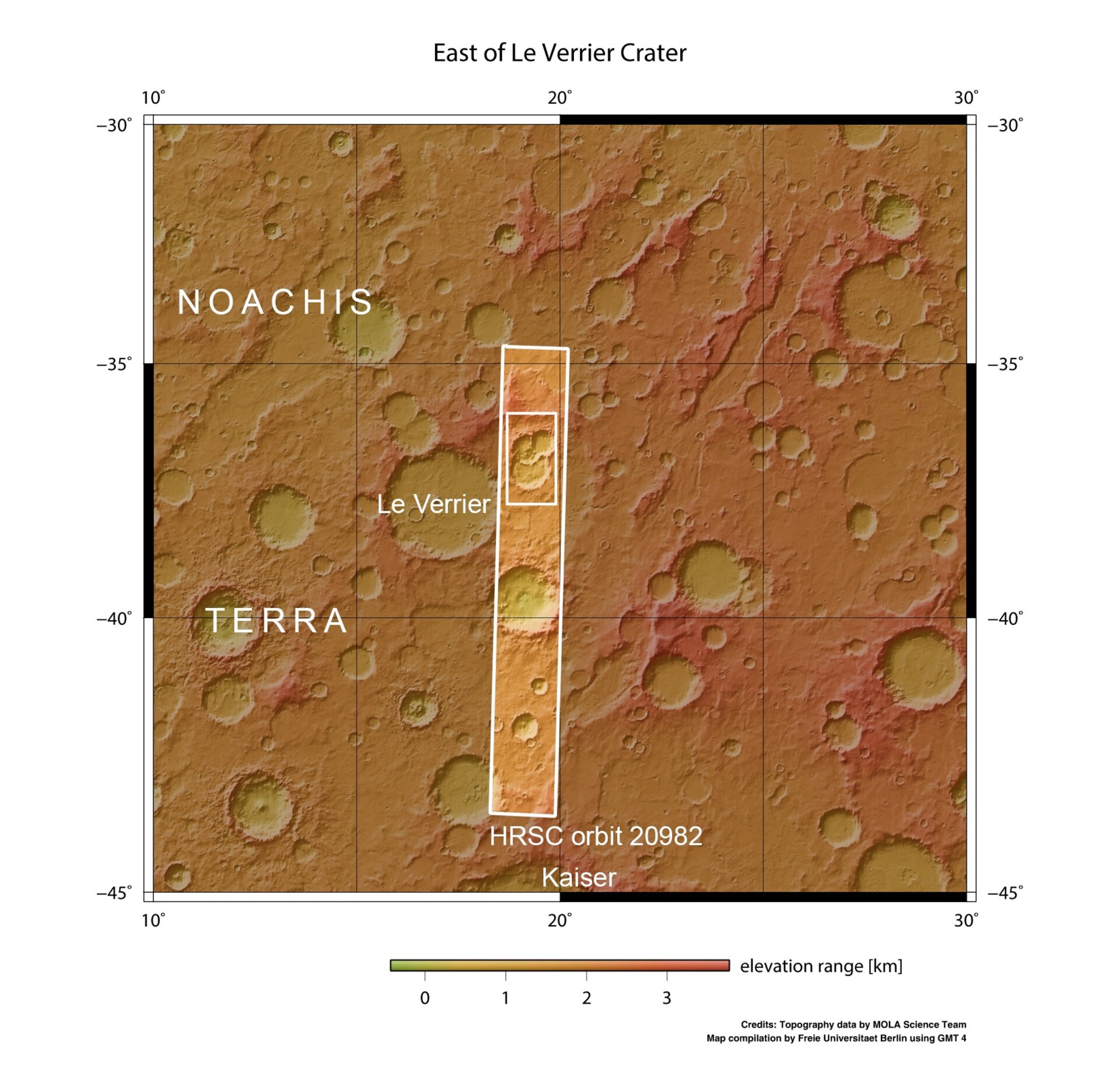 Whether the triple impact crater is due to one collision or more is hard to tell. Researchers say the impactor may have broken into three pieces before hitting the ground in close formation, but other examples of this shatter approach do not show such clear ridge definitions, nor are they so neatly overlapped.

Double and triple impact craters are unusual to see but they are not unheard of; we occasionally find them on Mars and even on Earth, although not all of them are formed in the same way.

In 2015, for instance, astronomers noticed a similar triple crater in Elysium Planitia near the equator of Mars (depicted below). At the time, the team surmised it could be due to an asteroid breaking up in the atmosphere, or it could be due to a smaller asteroid orbiting a larger binary pair. 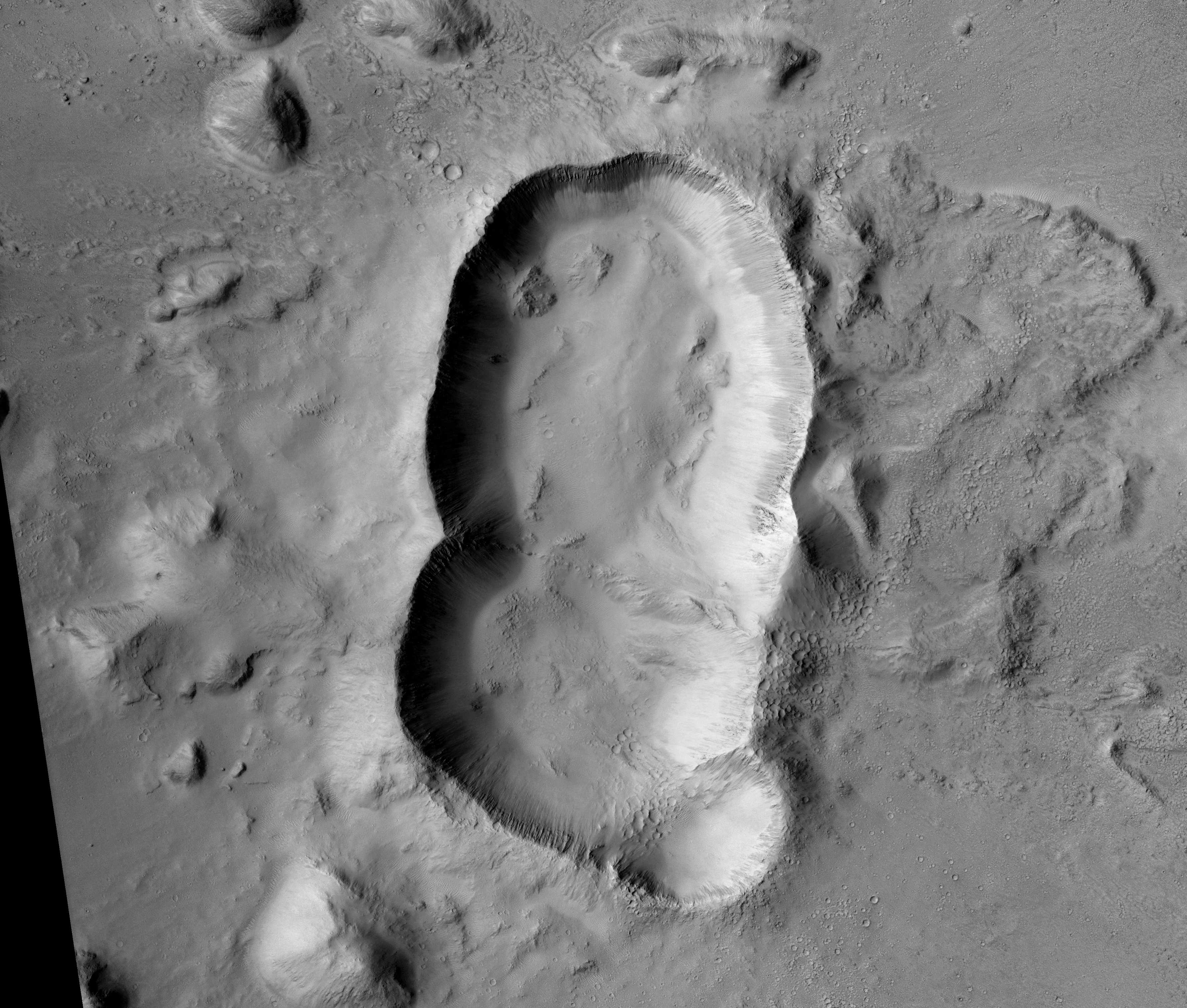 Some have also postulated that double craters are due to double asteroids, composed of two or more rocky bodies in close contact or closely orbiting each other. Only about 2 percent of all asteroids are thought to form from two or more bodies like this, but that doesn’t mean they can’t sometimes collide with a planet and leave a scar.

“Another explanation could be coincidence,” reads a press release on the latest triple impact crater, this time from the European Space Agency, “at different points in time, three separate impactors could have hit Mars’ surface in this location, creating a neat superposition of craters completely by chance.”

Given how heavily bombarded this region of Mars once was, experts say that’s the likelier possibility, although it’s hardly the more interesting one. 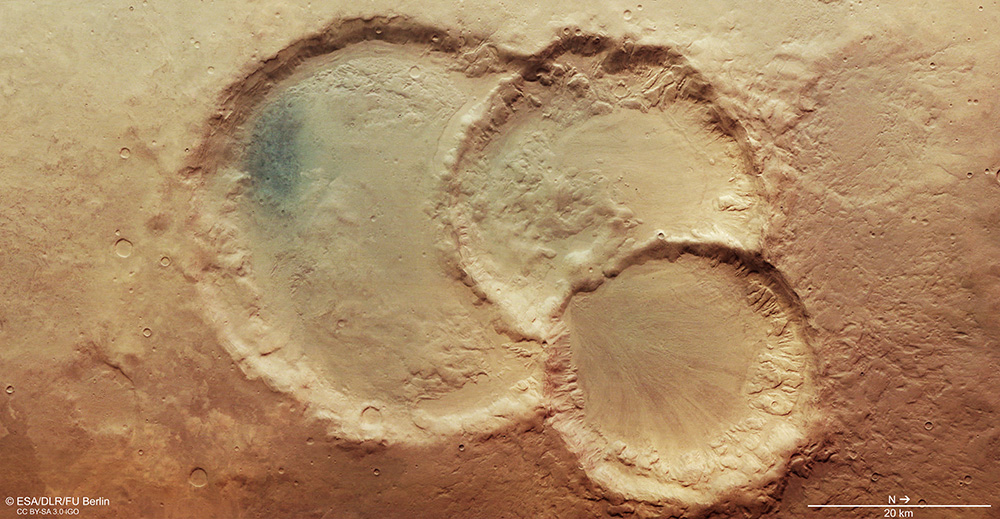 If, on the other hand, this isn’t due to three chance encounters, and the impactor really did break apart before hitting Mars, that tells us something important about this planet: 4 billion years ago, the atmosphere of Mars was likely a lot tougher to penetrate than it is now, and that implies warmth and wetness.

Similar to other craters in the region, this triple impact crater shows flattened rims and shallow floors from the wear and tear of time. Some of its marks even suggest a glacier-like flow, which may have helped soften the soil underneath, gradually filling the indentation as the ice melted.

Like scars often do, this one speaks volumes of the past.

Intriguing Meteorite From Mars Reveals ‘Huge Organic Diversity’, Scientists Say
Are Your Cats Playing or Fighting? Researchers Think They Can Tell The Difference
This Physicist Says Electrons Spin in Quantum Physics After All. Here’s Why
JWST Has Found Life’s Elemental Building Blocks in The Depths of Darkest Space
Mysterious White Clouds Keep Popping Up Near The Bahamas, And No One Knows Why