Early this morning, India launched a missile toward space, struck an Earth-orbiting satellite, and destroyed the spacecraft.

Indian Prime Minister Narendra Modi made a televised address shortly after the launch to declare the anti-satellite, or ASAT, test a success. He praised the manoeuvre, called “Mission Shakti”, as “an unprecedented achievement” that registers India as “a space power”.

Modi also clarified that the satellite was one of India’s own, according to Reuters.

“Our scientists shot down a live satellite. They achieved it in just three minutes,” he said during the broadcast, adding: “Until now, only US, Russia, and China could claim the title. India is the fourth country to achieve this feat.”

While Modi and his supporters may hail the event as an epic achievement, India’s ASAT test represents an escalation toward space warfare and also heightens the risk that humanity could lose access to crucial regions of the space around Earth.

That’s because destroying the satellite created debris that’s now floating in space. Those pieces have the potential to collide with, damage, and possibly destroy other spacecraft.

That’s about 65 miles (100 kilometres) higher than the 185-mile (300-kilometre) altitude of India’s now obliterated satellite, but there is nonetheless a chance some debris could reach higher orbits and threaten the space station.

Two astronauts are scheduled to conduct a spacewalk on Friday (it was going to be the first all-female spacewalk, but that’s no longer the case) to make upgrades to the orbiting laboratory’s batteries.

Spokespeople at NASA did not immediately respond to Business Insider’s requests for information about the risk posed by this new debris field.

Regardless of what happens next, tracking the debris is essential.

“The Department of Defence is aware of the Indian ASAT launch,” a spokesperson for the US Air Force’s 18th Space Control Squadron, which tracks and catalogues objects in space, told Business Insider in an email.

The potential risk to the ISS and other satellites only scratches the surface of larger worries associated with destroying spacecraft, either intentionally or accidentally. 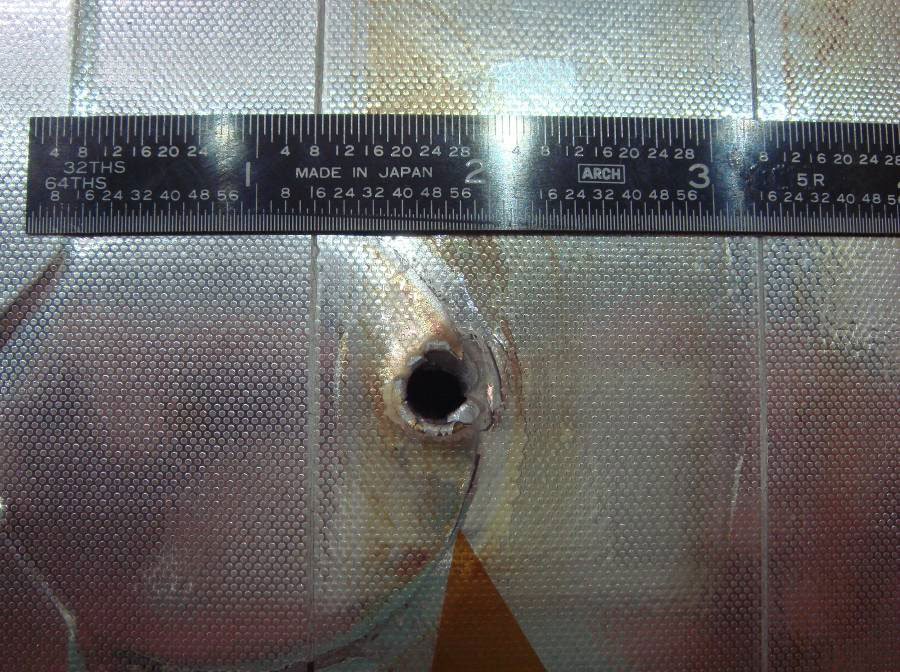 Any collision in space creates a cloud of debris, with each piece moving at about 17,500 mph (28,000 kilometre per hour).

That’s roughly the speed required to keep a satellite in low-Earth orbit and more than 10 times as fast as a bullet shot from a gun.

At such velocities, even a stray paint chip can disable a satellite. Jack Bacon, a scientist at NASA, told Wired in 2010 that a strike by a softball-sized sphere of aluminium would be akin to detonating 7 kilograms (15 pounds) of TNT explosives.

This is worrisome for a global society increasingly reliant on space-based infrastructure to make calls, get online, find the most efficient route home via GPS, and more.

The ultimate fear is a space-access nightmare called a “Kessler syndrome” event, named after Donald J. Kessler, who first described such an event in 1978 while he was a NASA astrophysicist.

In such a situation, one collision in space would create a cloud of debris that leads to other collisions, which in turn would generate even more debris, leading to a runaway effect called a “collision cascade”.

So much high-speed space junk could surround Earth, Kessler calculated, that it might make it too risky for anyone to attempt launching spacecraft until most of the garbage slowed down in the outer fringes of our planet’s atmosphere, fell toward the ground, and burned up.

“The orbital-debris problem is a classic tragedy of the commons problem, but on a global scale,” Kessler said in a 2012 mini-documentary.

Given the thousands of satellites in space today, a collision cascade could play out over hundreds of years and get increasingly worse over time, perhaps indefinitely, unless technologies are developed to vaporise or deorbit space junk.

A launch in the wrong direction 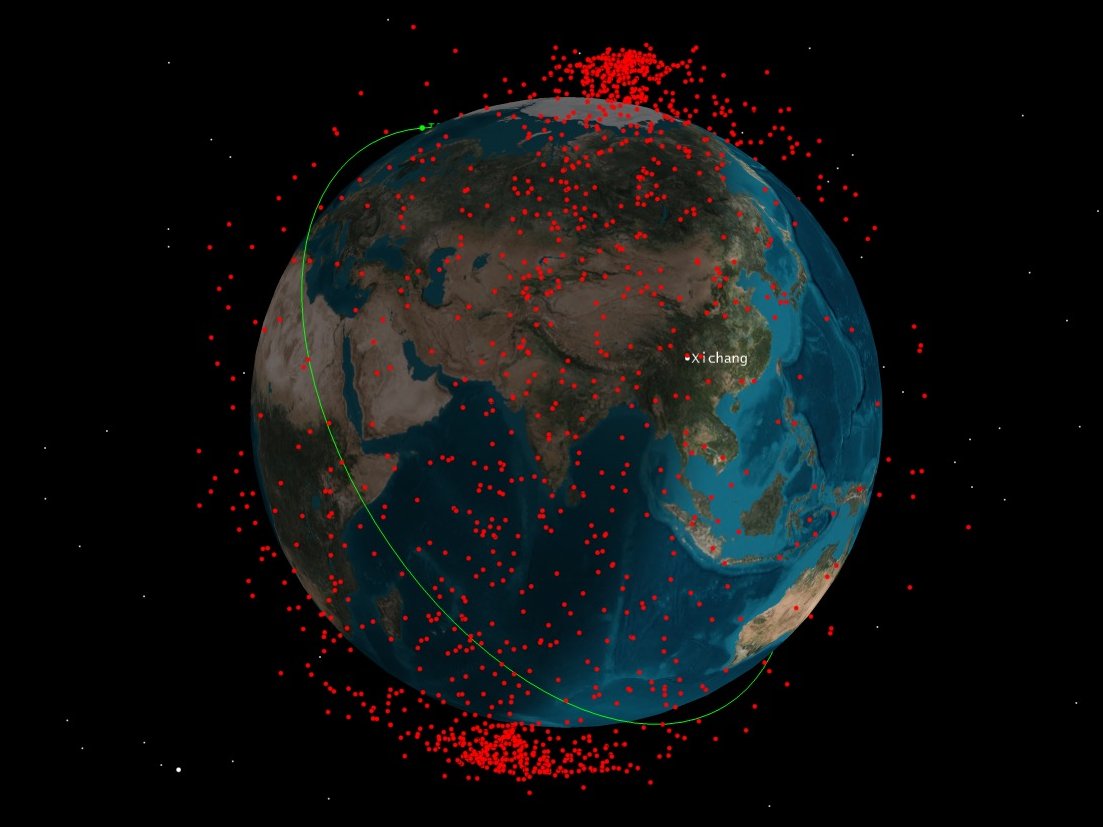 An illustration of the space-debris cloud created by China’s 2007 anti-satellite test. (CSSI)

An ASAT test that China conducted in January 2007 showed how much of a headache the debris from these shoot downs can become.

As with India’s test, China launched a missile armed with a “kinetic kill vehicle” on top.

The kill vehicle – essentially a giant bullet-like slug – pulverized a 1,650-pound (750-kilogram) weather satellite, in the process creating a cloud of more than 2,300 trackable chunks of debris the size of golf balls or larger.

It also left behind 35,000 pieces larger than a fingernail and perhaps 150,000 bits smaller than that, according to the Center for Space Standards and Innovation (CSSI) and BBC.

The CSSI called the test “the largest debris-generating event in history, far surpassing the previous record set in 1996.”

Years later, satellite operators and NASA are still dodging the fallout with their spacecraft.

Even without missiles, plenty of space debris is created regularly. Each launch of a rocket deposits some trash up there, and older satellites that have no deorbiting systems or aren’t “parked” in a safe orbit can collide with other satellites.

The collision created thousands of pieces of new debris, many of which are still in orbit.

There are more productive ways to use rockets

To be clear, India’s Mission Shakti test likely was not as dangerous as these other debris-creating events.

At an altitude of about 185 miles (300 kilometres), it was roughly 350 miles closer to Earth than China’s 2007 test or the US-Russian satellite crash of 2009. That means the pieces will fall out of orbit at a faster rate.

The satellite India destroyed, likely Microsat-R, was small relative to other spacecraft, though not insignificantly: It weighed about 1,540 pounds (700 kilograms), according to Ars Technica.

Modi did not immediately respond to Business Insider’s request for comment on the ASAT test’s debris field, but according to Reuters, India “ensured there was no debris in space and the remnants would ‘decay and fall back on to the earth within weeks’.” In that sense, the test may be more similar to a US Navy shoot-down of a satellite in 2008.

However, the forces involved a space-based crash can accelerate debris into higher and different orbits. So obliterating any satellite is not a step in the right direction. Nor is creating a capability that could one day, either intentionally or accidentally, spark a Kessler syndrome event.

Much like the idea of deterrence with nuclear weapons – “if you attack me, I’ll attack you with more devastating force” – deterrence with anti-satellite weapons is extremely risky. With either, an accident or miscalculation could lead to devastating and lasting problems that would harm the entire world for generations.

As a global society, it’d behoove us not to cheer the achievement of a weapons capability that edges the world closer to a frightening brink. Instead, we should rebuke such tests and instead demand from our leaders peaceful cooperation in space, including the development of means to control our already spiraling space-debris problem.

“If we don’t change the way we operate in space,” Kessler said in 2012, we are facing down an “exponentially increasing amount of debris, until all objects are reduced to a cloud of orbiting fragments.”

Rather than individual countries investing in missile-based weaponry, perhaps we should call on our leaders to spend that human and financial capital on our world’s most dire and pressing problems – or even work toward returning people to the moon and rocketing the first crews to Mars.

Ant Babies Ooze a Weird Kind of ‘Milk’, And The Whole Colony Slurps It Down
A New Satellite Is One of The Brightest Objects in The Sky, And It’s a Big Problem
A Strange Thing Happens to Wolves Infected by Infamous Mind-Altering Parasite
A ‘Wormhole’ Built on a Quantum Computer Teleported Information as Predicted
Two Minerals Never Seen Before in Nature Discovered In an Asteroid That Fell to Earth