Record-smashing cold temperatures have led to a wave of headlines highlighting how parts of the US are now colder than Mars.

In parts of media, this is now a near-yearly ritual: The Atlantic had a story on it in 2017, and even NASA’s Curiosity Rover tweeted it a few winters ago.

But what does “colder than Mars” really mean? Does it mean your friends in the Midwest – assuming they survive the Polar Vortex – have conquered their first round of Martian training? Not quite.

It could be spring in New York City and be 42 degrees Fahrenheit (6 degrees Celsius) and we could still say that it’s colder than the Red Planet.

Mars has a thin, CO2-rich atmosphere – about 100 times thinner than Earth’s. That means the Red Planet isn’t able to retain much heat. Which makes it easy to assume it’s pretty damn cold all the time. But that’s not quite accurate.

According to The National Weather Service, towns across Minnesota and North Dakota plummeted to -60 degrees F (-51 C) or even colder this week. Colder than Mars? Yes. But not the average Martian day.

NASA created this handy chart to help us out. 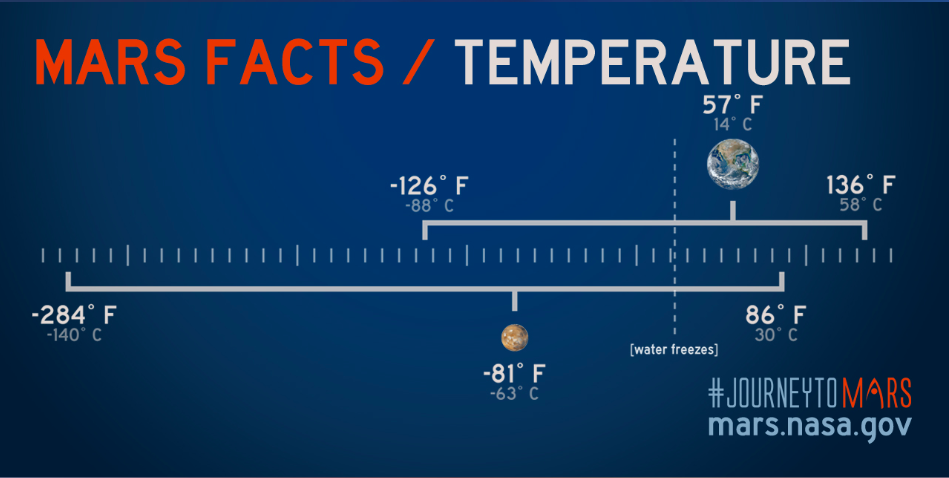 On an average Mars day, the planet is about -81 degrees F (-60 C) – which yes, is much colder than Minnesota right now. But that’s just part of the range of temperatures on the Red Planet.

A summer day on Mars may get up to 70 degrees F (20 C) near the equator – with the highest temperature shown by NASA at a balmy 86 degrees F (30 C). Which is why we could really say it’s colder than Mars on parts of Earth any day of the year.

Still, in an interview with The Atlantic, Michael Mischna, a research scientist at NASA’s Jet Propulsion Laboratory in California, says the comparison is indeed accurate – but with one major difference.

“If you were to jump into a pool that was 70 degrees, it would feel a lot colder to your body than standing in air at 70 degrees, and that’s because the water is able to suck the heat out of your body,” Mischna said.

So here’s the deal: Like any other planet, Mars sees a wide range of temperatures depending on the location on the planet and the time of year.

Yes, it has seasons like Earth because of the tilt of its axis. So it’s easy to say “it’s colder than Mars” – and it could be true. But the reality is as nuanced as environmental variations throughout the cosmos.

Stunning Green Comet Will Be Closest to Earth Today, at Peak Brightness
Ancient Goo Spills The Secrets of How The Egyptians Mummified Their Dead
AI Predicts We’ll Breach Our Climate Goal in Just 10 Years
A Billion-Dollar Biotech Company Plans to Bring The Dodo Back to Life
‘Polluted Realism’: How Monet’s Art Mirrors The Evolution of Smog