About 11 billion miles from Earth, a NASA probe has broken another record for humanity.

The space agency separately launched its twin Voyager spacecraft in 1977 with a mission to explore the outer Solar System.

The car-size Voyager 1 and Voyager 2 probes exploited a rare alignment of the planets (and their gravitational fields) to zoom past and study worlds like Uranus and Neptune for the first time.

But once the Voyagers’ main missions ended, the nuclear-powered robots kept going. And going.

The probes are still flying away from the Sun at speeds of more than 34,000 mph. That has made the Voyagers the two farthest human-made objects in existence.

Voyager 1 officially left what researchers call the heliosphere – the term for the vast and crucial bubble of the Sun’s influence – on August 25, 2012. It sailed into the void between stars, called interstellar space. 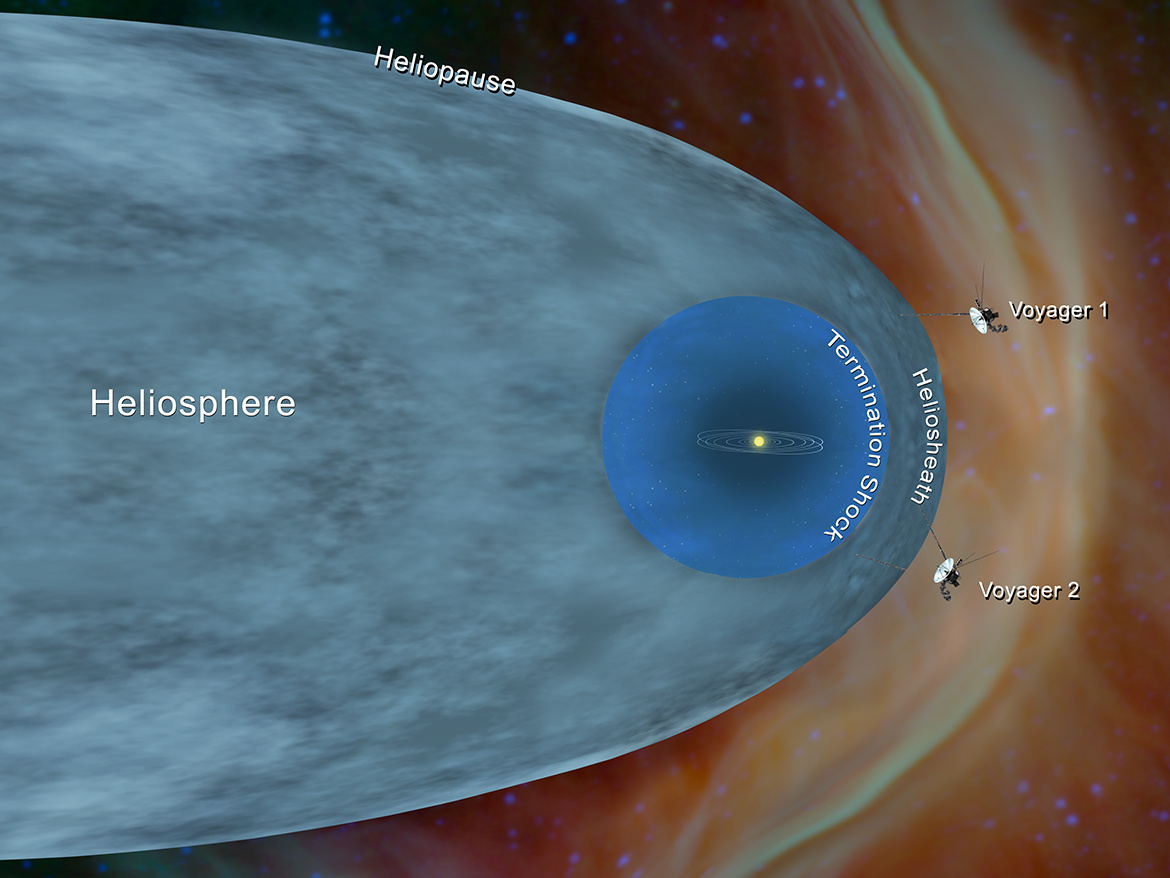 (NASA/JPL-Caltech) A diagram showing both of NASA’s Voyager probes in interstellar space as of November 2018.

That doesn’t mean it left the Solar System, though. Rather, Voyager 1 broke through the heliopause: the area where a “wind” of the Sun’s high-speed plasma particles grinds to a relative halt. From that distance, it takes light 1,000 minutes to travel to Earth.

Now NASA says Voyager 2, which travels about 4,000 mph slower than its twin, achieved the same feat on November 5, 2018.

“I think we’re all happy and relieved that the Voyager probes have both operated long enough to make it past this milestone,” Suzanne Dodd, the project manager of the Voyager missions at NASA’s Jet Propulsion Laboratory (JPL), said in a press release.

She added: “This is what we’ve all been waiting for. Now we’re looking forward to what we’ll be able to learn from having both probes outside the heliopause.”

The Sun fuses hydrogen deep inside its core, ultimately creating the giant ball of glowing gases we see in the sky (and can thank for the existence of life on Earth).

But the Sun also creates a powerful magnetic field that helps constantly shoot particles of hot gas into space. Researchers call this outflow of charged particles in all directions the solar wind.

The vast region in which the solar wind has some influence is called the heliosphere. Where this boundary ends, interstellar space begins.

“The Sun creates this huge bubble of plasma – ionized material – that goes outward at a million miles per hour,” Ed Stone, a project scientist on the Voyager mission, said in a video by NASA JPL.

This is the border that NASA believes both Voyager 1 and Voyager 2 have sailed past.

It’s not easy to know whether a robot has punctured the heliopause. After all, it’s only been done twice.

There are also pockets of plasma near its fringes that can trick human-made instruments. (One moment there are readings of plasma, then the measurements decrease, then they ramp back up.)

So to be sure that Voyager 2 left the heliosphere, NASA leaned on data from five instruments. One tool was the plasma science experiment, which detects solar wind particles. Those readings began to plummet on November 5.

“We saw that, in fact, there was no longer any measurable solar wind,” Stone said. “We had left the bubble.”

Another clue came from the instruments on Voyager 2 that measure hits from energetic cosmic rays.

Cosmic rays come from beyond the Sun, likely from spinning supermassive black holes called blazars. Solar wind particles act as a magnetic shield that deflects many of these high-energy rays from reaching Earth.

In early November, as Voyager 2’s plasma readings of the solar wind began to fall, the rate of hits by cosmic ray particles began to climb. This signified to NASA that, indeed, Voyager 2 was finally interstellar.

However, NASA says Voyager 2 has not left the Solar System, and neither of the twin probes will do so anytime soon.

“The boundary of the Solar System is considered to be beyond the outer edge of the Oort Cloud, a collection of small objects that are still under the influence of the Sun’s gravity,” NASA said in its press release.

No one is sure how big the Oort Cloud is, but estimates suggest it starts at about 1,000 Earth-Sun distances, or astronomical units (AU), and stretches out to about 100,000 AU. That is a zone between 0.16 and 1.6 light-years away from the Sun.

“It will take about 300 years for Voyager 2 to reach the inner edge of the Oort Cloud,” NASA said. Getting beyond that celestial border could then take around 30,000 years.