The smallest known main-sequence star in the Milky Way galaxy is a real pixie of a thing.

It’s called EBLM J0555-57Ab, a red dwarf 600 light-years away. With a mean radius of around 59,000 kilometres, it’s just a smidge bigger than Saturn. That makes it the tiniest known star to support hydrogen fusion in its core, the process that keeps stars burning until they run out of fuel.

In our Solar System, there are two objects larger than this teeny star. One is the Sun, obviously. The other is Jupiter, like a giant scoop of ice cream, coming in with a mean radius of 69,911 kilometres.

So why is Jupiter a planet and not a star?

The short answer is simple: Jupiter doesn’t have enough mass to fuse hydrogen into helium. EBLM J0555-57Ab is about 85 times the mass of Jupiter, about as light as a star can be – if it were any lower, it would not be able to fuse hydrogen either. But if our Solar System had been different, could Jupiter have ignited into a star?

Jupiter and the Sun are more alike than you know 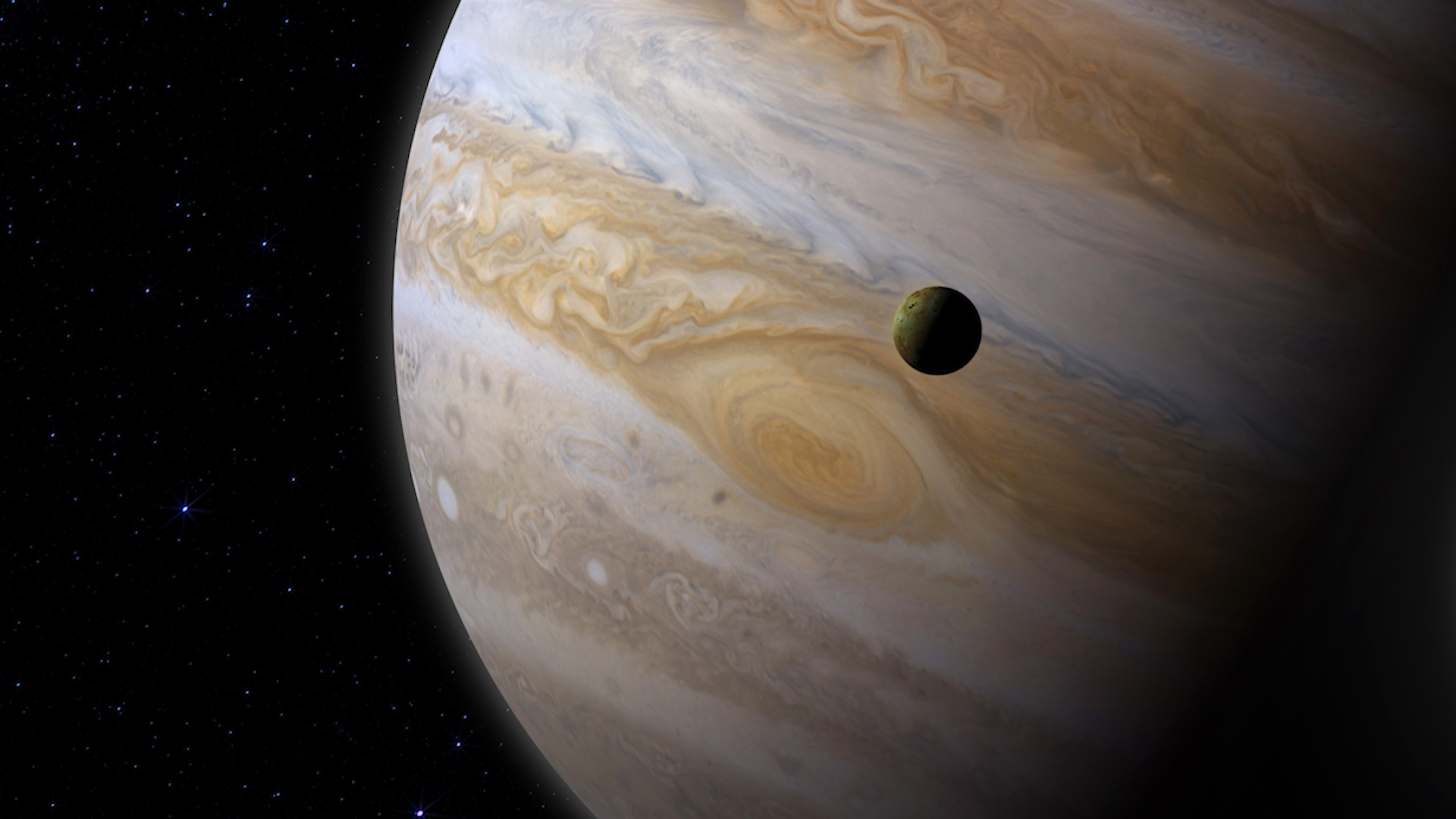 It’s for this reason that Jupiter is sometimes called a failed star.

But it’s still unlikely that, left to the Solar System’s own devices, Jupiter would even become close to being a star.

Stars and planets, you see, are born through two very different mechanisms. Stars are born when a dense knot of material in an interstellar molecular cloud collapses under its own gravity – pouf! flomph! – spinning as it goes in a process called cloud collapse. As it spins, it spools in more material from the cloud around it into a stellar accretion disc.

As the mass – and therefore the gravity – grows, the core of the baby star is squeezed tighter and tighter, which causes it to grow hotter and hotter. Eventually it becomes so compressed and hot, the core ignites and thermonuclear fusion kicks off.

According to our understanding of star formation, once the star has finished accreting material, a whole lot of accretion disc is left over. This is what the planets are made of.

Astronomers think that, for gas giants like Jupiter, this process (called pebble accretion) starts with tiny chunks of icy rock and dust in the disc. As they orbit the baby star, these bits of material start to collide, sticking together with static electricity. Eventually, these growing clumps reach a large-enough size – around 10 Earth masses – that they can gravitationally attract more and more gas from the surrounding disc.

From that point, Jupiter gradually grew to its current mass – about 318 times the mass of Earth, and 0.001 times the mass of the Sun. Once it had slurped up all the material that was available to it – at quite a remove from the mass required for hydrogen fusion – it stopped growing.

So, Jupiter was never even close to growing massive enough to become a star. Jupiter has a similar composition to the Sun not because it was a ‘failed star’ but because it was born from the same cloud of molecular gas that gave birth to the Sun.

There is a different class of objects that can be considered ‘failed stars’. These are the brown dwarfs, and they fill that gap between gas giants and stars.

Starting at over about 13 times the mass of Jupiter, these objects are massive enough to support core fusion – not of normal hydrogen, but deuterium. This is also known as ‘heavy’ hydrogen; it’s an isotope of hydrogen with a proton and a neutron in the nucleus instead of just a single proton. Its fusion temperature and pressure are lower than the fusion temperature and pressure of hydrogen.

Because it occurs at a lower mass, temperature and pressure, deuterium fusion is an intermediate step on the way to hydrogen fusion for stars, as they continue to accrete mass. But some objects never attain that mass; these are known as brown dwarfs.

For a while after their existence was confirmed in 1995, it was unknown whether brown dwarfs were underachieving stars or overambitious planets; but several studies have demonstrated that they form just like stars, from cloud collapse rather than core accretion. And some brown dwarfs are even below the mass for deuterium burning, indistinguishable from planets.

Jupiter is right on the lower mass limit for cloud collapse; the smallest mass of a cloud collapse object has been estimated at about one Jupiter mass. So if Jupiter had formed from cloud collapse, it could be considered a failed star.

But data from NASA’s Juno probe suggest that, once upon a time at least, Jupiter had a solid core – and that is more consistent with the core accretion formation method.

Modelling suggests that the upper limit for a planet mass, forming via core accretion, is less than 10 times the mass of Jupiter – just a few Jupiter masses shy of deuterium fusion.

So, Jupiter isn’t a failed star. But thinking about why it isn’t one can help us better understand how the cosmos works. In addition, Jupiter is a stripy, stormy, swirly butterscotch wonder in its own right. And without it, we humans may not have even been able to exist.

That, however, is another story, to be told another time.

Scientists Reveal The Most Precise Map of All The Matter in The Universe
Bar Graphs Induce a Hidden Bias in Interpretation, Experiment Shows
Could ‘The Last of Us’ Ever Happen? The Real Risks of a Fungus Pandemic
Wildfire Destruction in The Western US Has Doubled in Just 10 Years
Astronomers Find What May Be a Habitable World 31 Light-Years Away