Mars will look brighter in the night sky over the next six weeks than it has appeared in 15 years.

That’s because the red planet will be at its closest point to Earth since 2003 throughout June and July, as our planet passes between Mars and the Sun.

On July 31, when Mars will be at its brightest, it will be 35.8 million miles away from Earth, according to The Weather Channel.

Mars will be easily visible to the naked eye throughout July, outshining all but the brightest stars as it gets to its closest point.

The reason for this is a phenomenon called perihelic opposition. In simple terms, opposition is when Earth passes directly between Mars and the Sun. Last month, Jupiter was in opposition to our planet, swinging within 409 million miles of Earth.

Mars opposition happens every two years or so – the last one came in May 2016. But this year is special because within a few weeks of the opposition, the red planet will also hit its closest point to the Sun in its orbit, a point called the perihelion.

Perihelic opposition occurs only once every 15 to 17 years, when Earth’s and Mars’ orbits align to bring the two planets close together, according to NASA.

But while Mars may look bright and beautiful from your backyard, the reality on the planet is much less friendly.

A dust storm is currently walloping Mars, covering around 10 billion acres of the red planet’s surface. That’s an area equivalent to the size of North America and Russia, and it takes up a quarter of Mars’ surface area.

“The storm is one of the most intense ever observed on the Red Planet,” NASA said in a press release. 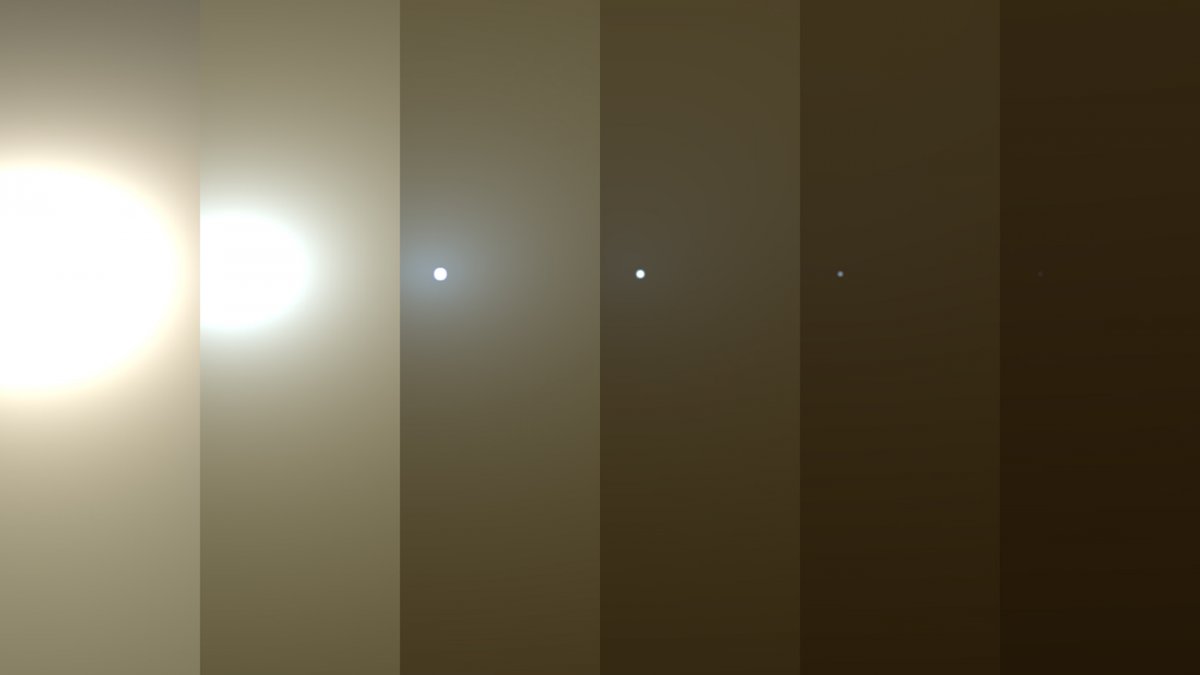 Opportunity’s view as the storm blotted out the sun. (NASA/JPL Caltech/TAMU)

NASA put its solar-powered Opportunity rover in sleep mode to ride out the storm, but its unclear whether the ageing rover will be able to function again after the storm ends.

The image below shows a series of pictures that NASA simulated from the perspective of the Opportunity rover.

They give a sense of what the sun and sky have looked like from Mars’ surface – at the brightest time of the day – as the storm has worsened. In the far-right picture, the sun is entirely blotted out to Opportunity.

NASA’s newer Curiosity rover runs on nuclear power and is located in an area of Mars that has been less affected by the dust storm, so it seems to be doing fine.

This animation shows the dust storm spreading (it’s that orangeish blob), with the locations of the Opportunity and Curiosity rovers labelled.

Expert Proposes a Method For Telling if We All Live in a Computer Program
Scientists Glimpse Incoming Asteroid Just Hours Before It Makes Impact
Man Keeps Rock For Years, Hoping It’s Gold. It Turns Out to Be Far More Valuable
More Strange Cosmic Threads Discovered Outside Our Galaxy, And They’re Huge
There’s a Weird Link Between Teeth And The Evolution of Pregnancy