The shimmering appearance of frosty, white clouds in the atmosphere of Mars has surprised NASA scientists, with the wispy formations emerging in unexpected ways.

Clouds are a rarer weather phenomenon on Mars as compared to Earth, thanks to the red planet’s thin, dry atmosphere, but they’re certainly not unheard of.

Still, a number of unusual cloud formations observed by NASA’s Curiosity rover in recent times have been somewhat remarkable, arriving both earlier than expected in the Martian year, and at higher altitudes in the atmosphere.

According to the space agency, cloudy days on Mars usually occur around the equator at the planet’s coldest time of the year, which is when Mars is farthest from the Sun in its slightly elliptical orbit. 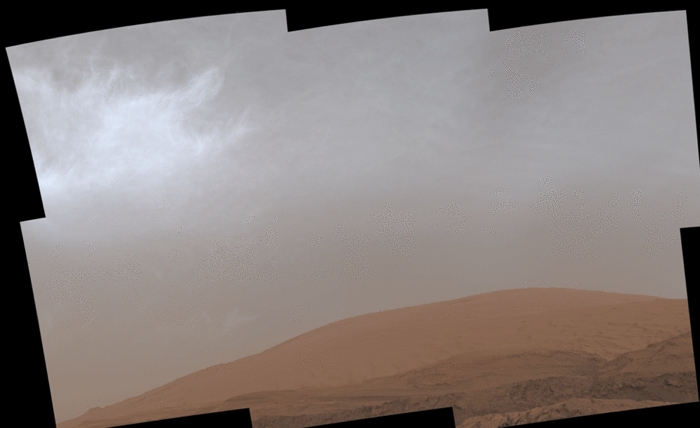 Two years ago, however, clouds began to emerge earlier than generally expected, and this year the trend continued, with early clouds showing up in January, and higher in the sky as well.

NASA researchers aren’t entirely sure, but these unusual characteristics could be because these aren’t clouds of water ice.

The majority of Martian clouds are made up of water ice crystals that shimmer with light reflected from the Sun. Such clouds usually sit at a maximum altitude of around 60 kilometers (about 37 miles).

Further analysis is required to be sure, but the higher-altitude clouds Curiosity has seen recently may be of a different kind, and could be made of frozen carbon dioxide (aka dry ice) suspended in a higher, colder section of the sky.

Whatever they are, they’re a sight to behold thanks to Curiosity’s keen vision.

Amongst the rover’s recent captures are noctilucent (night shining) clouds, which reflect the last, fleeting light of the day as it’s chased away by the sweeping darkness of night.

Mars’s iridescent (aka ‘mother of pearl’) clouds are an even more captivating phenomenon, revealing a subtle palette of different colors in the cloud, which speaks to how they take shape.

“If you see a cloud with a shimmery pastel set of colors in it, that’s because the cloud particles are all nearly identical in size,” explains atmospheric scientist Mark Lemmon from the Space Science Institute in Boulder, Colorado.

“That’s usually happening just after the clouds have formed and have all grown at the same rate.”

While the colors are faint, they’re still some of the more colorful things you could ever see on the red planet, Lemmon says.

“I always marvel at the colors that show up: reds and greens and blues and purples,” Lemmon says. “It’s really cool to see something shining with lots of color on Mars.”

US Shoots Down Chinese Surveillance Balloon: What Can They Actually See?
AI Predicts We’ll Breach Our Climate Goal in Just 10 Years
Hidden Layers of Melting Rock Found Lurking Beneath Earth’s Crust
A Billion-Dollar Biotech Company Plans to Bring The Dodo Back to Life
A Lost Interview With The ‘Father of The Big Bang’ Was Just Discovered