NASA has delayed the first flight of its Ingenuity Mars helicopter after a crucial test-spin of the drone’s rotor blades abruptly stopped.

This was the last major test to make sure the helicopter would be ready for its first flight, which was originally scheduled for early Monday.

Now NASA has delayed the historic liftoff — which would mark the first powered, controlled flight on another planet – to Wednesday.

For the test on Friday, Ingenuity was supposed to spin its blades at full speed while on the ground.

The two pairs of blades should have spun in opposite directions at more than 2,500 rotations per minute – about eight times faster than an Earth helicopter.

On flight day, they’ll need that speed to lift the 4-pound drone into the thin Martian atmosphere.

That air has just 1 percent the density of Earth’s atmosphere, making Ingenuity’s task the equivalent of flying three times higher than the peak of Mount Everest.

But that test spin was abruptly halted when a “watchdog” timer expired, NASA announced on Saturday.

“The watchdog timer oversees the command sequence and alerts the system to any potential issues. It helps the system stay safe by not proceeding if an issue is observed and worked as planned,” NASA’s announcement said.

It’s not yet clear what the issue was, but NASA said the helicopter is “safe and healthy” and fully communicating with mission controllers on Earth.

The agency’s helicopter team is reviewing data from the test to diagnose the issue. NASA will have to reattempt the full-speed spin before Ingenuity can fly.

Ingenuity could fly up to 5 times on Mars

Ingenuity traveled nearly 300 million miles to Mars tucked inside the belly of the Perseverance rover.

It has successfully unfolded itself from its underbelly hideaway, dropped to the ground, survived frigid Martian nights on its own, charged up with solar energy, and conducted a series of system checks.

All the checkouts and tests had gone well until Friday’s full-speed spin.

“So far so good, knock on wood,” MiMi Aung, the project manager for Ingenuity, said in a briefing before that final test on Friday. 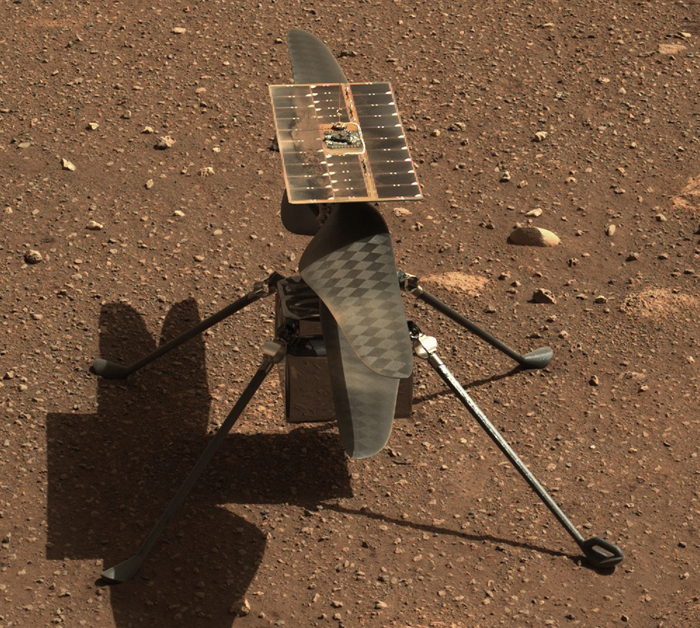 Ingenuity on the surface of Mars. (NASA/JPL-Caltech/ASU)

For its first flight, Ingenuity is supposed to lift itself about 10 feet into the air, hover, then lower itself safely back to the ground. If that goes well, Ingenuity could attempt up to four more increasingly difficult flights.

“We’re all kind of a little bit nervous and excited at the same time,” Thomas Zurbuchen, the agency’s associate administrator for science, told Insider on Friday. “We’re all ready, but we’ll all feel better when it’s done – and successful.”

This is a flight experiment, meant to prove that rotorcraft technology can work on Mars.

If it succeeds, it could open the door for future space-helicopters to study regions that rovers can’t reach – mountains, canyons, and rocky terrains – or even do reconnaissance for future Mars astronauts.

“Suppose that it does, in fact, work. What we will have proven is that we can add an aerial dimension to discovery and exploration on Mars,” Zurbuchen said. “That aerial dimension, of course, opens up aspects of science and overall exploration that, frankly, at this moment in time, are only our dreams.”

This Asteroid Has Survived For 4 Billion Years. That Could Be a Huge Problem
Astronomers Just Discovered a ‘Bear’ on Mars
Shooting Tiny, High Speed Bullets at a Spacecraft Could Speed Up Travel to The Stars
Archaeologists Find Hidden Ruins of ‘Complete’ Roman-Era City in Egypt
People Who Don’t Exist Look More Real Than Actual People, Study Finds