Every now and then, Earth’s protective magnetic cage changes its stripes, sending explosive showers of charged particles spilling into the atmosphere.

NASA’s quartet of orbiting Magnetospheric Multiscale (MMS) satellites has finally recorded one in high detail on the planet’s night side, providing vital information on a phenomenon that stirs the winds of space throughout the Solar System.

Researchers already mapped the details of one such an event in the Sun-side zone of the magnetosphere in October 2015.

Now they’ve seen it in the tail section of the immense, comet-shaped magnetic bubble surrounding our globe. Which has given them a completely new take on the phenomenon, revealing smooth streams of high energy electron jets moving at more than 15,000 kilometres (9,300 miles) per second.

Given the threats such magnetic eruptions pose, we really ought to know as much as we can about these spectacular eruptions.

“This was a remarkable event,” says deputy principal investigator for the MMS mission, Roy Torbert.

Our planet’s surface is protected from the constant rain of high velocity electrons and protons spilling from the Sun by a magnetic umbrella.

The ‘fabric’ of this umbrella writhes and ripples with energy as it sweeps the particles along looping channels, and eventually back out into space.

It’s a good thing too – those high energy particles aren’t exactly good for life down here on the surface. Enough of them could also cause chaos for delicate electronic systems and power grids.

Not all of those particles stay in their designated magnetic lanes as it is. We can see the effects of stray particles colliding with the atmosphere in the form of auroras near the poles, for example.

Sometimes the magnetic field’s squirming channels reconfigure in what’s known as magnetic reconnection, spraying its contents in a brief explosion of energetic particles.

Knowing they occur is one thing. But watching one in high resolution as it happens goes a long way to helping us refine our ideas about how they occur not just above our planet, but throughout the Universe.

After all, these explosive events are what’s responsible for the bursts of protons and electrons in the first place, erupting like giant star blisters to send energetic winds of charged particles out through the Solar System.

And that’s just our own Sun. Galaxies are pulsing all manner of magnetic explosions.

“This is important because the more we know and understand about these reconnections, the more we can prepare for extreme events that are possible from reconnections around the Earth or anywhere in the Universe,” says Torbert.

The pyramid formation of MMS satellites circles our planet in a wide, looping orbit that takes it nearly 153,000 kilometres (95,000 miles) from the surface.

This is largely because the magnetosphere isn’t exactly an even shape, distorted at high altitudes by the Sun’s own magnetic field and streams of particles into a long tail that extends out from the planet’s night side. 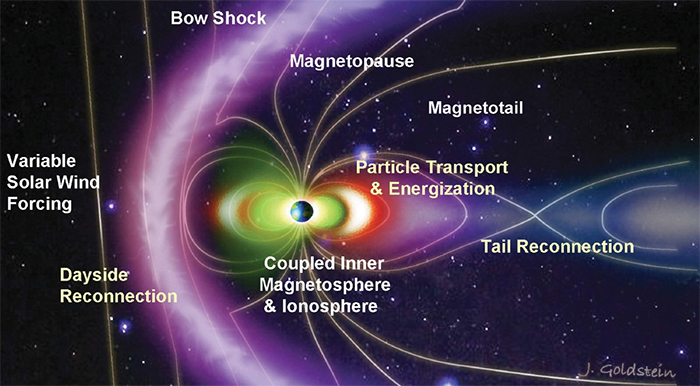 For the first three years of its mission, the MMS satellites collected information about the magnetosphere on the Sun-side. Here, as particles crash into the magnetic field, they form regions of different densities, which makes the reconnecting lines uneven.

The tail section of the magnetosphere is a completely different story. The streams of particles line up more symmetrically, providing a new perspective on how magnetic reconnection can occur.

“We have long known that it occurs in two types of regimes: asymmetric and symmetric, but this is the first time we have seen a symmetric process,” says Torbert.

The symmetric process seems to be a calmer version of the chaotic surf of activity on the Sun side.

“The process appears to be very efficient,” says Torbert.

“Any turbulence is not strong enough to disturb discrete features of the electron velocity distributions created in the electromagnetic fields around the energy dissipation region.”

As we grow more reliant on our sphere of electronic technology – both on the surface and high overhead – we’re going to need to know how to track those high energy particles from the Sun to areas safely beyond Earth’s orbit.

This research was published in Science.

Scientists Reveal The Most Distant Galaxy We’ve Ever Found
An Expert Explains Why The Radioactive Water Stored at Fukushima Should Be Released
Black Swans Could Be Entirely Wiped Out by a Single Virus, Scientists Warn
Archaeologists Find Hidden Ruins of ‘Complete’ Roman-Era City in Egypt
Astronomers Just Realized The Milky Way Is Too Big For Its Surroundings