The Moon awaits. After long decades in which no human being set foot on the lunar surface, we are heading back. And quite soon.

As part of the NASA-led Artemis program, astronauts are returning to the lunar environment as soon as 2024, with a view to ultimately establishing a long-term human presence on the Moon – a place we haven’t seen in person since 1972.

To live and work on the Moon, though, astronauts will need power and plenty of it, and there’s no power grid on the Moon.

While any number of creative solutions might be able to help fix that problem, for years NASA has viewed nuclear fission as the most practical power option for future astronaut colonies, and now the space agency is taking the next step in making a nuclear reactor on the Moon a reality.

After years of investigating the possibilities for lunar nuclear fission under its former Kilopower project, NASA is spearheading a new drive in fission surface power research, working in conjunction with the US Department of Energy (DOE).

The two organizations are now putting out the call for American industry partners to submit design concepts for nuclear fission power systems that could run on the lunar surface and be ready to launch and demonstrate their potential on the Moon within the decade.

According to NASA, a small, lightweight fission system – capable of operation on a lunar lander or lunar surface rover – could provide up to 10 kilowatts of electrical power, which would be sufficient to satisfy the electricity demands of several average households.

In the context of lunar operations, power usage would be different to what households require on Earth, of course: running life support systems, charging lunar rovers, and helping scientists to conduct experiments.

According to the NASA and DOE brief, future fission systems will ultimately need to produce at least 40 kilowatts of energy, which NASA says could power approximately 30 households for up to 10 years.

At those anticipated levels, there should be enough energy not only to make a sustained lunar presence possible, but also one day to enable exploration and even colonization of Mars – which is the scientific stretch goal Artemis’s endeavors are ultimately bringing us closer to. 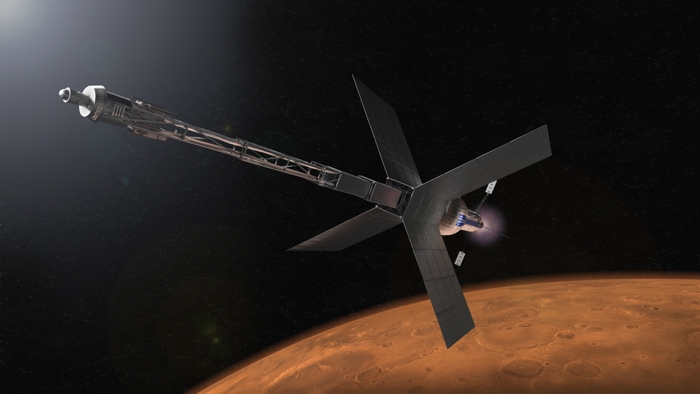 Illustration of a spacecraft with a nuclear propulsion system. (NASA)

In fact, NASA says today’s research into lunar fission power systems could also help inform proposed nuclear propulsion systems that may one day enable astronauts to journey to the red planet on spacecraft traveling at faster speeds for shorter missions.

One step at a time, though, as we are still likely years away from seeing a lunar fission reactor actually working on the Moon. While NASA and the DOE have enjoyed some success with Kilopower prototypes in previous experiments, nobody has yet had a chance to test something like this on the Moon, which is where it counts.

To get us closer to that, NASA and the DOE will select the most promising design proposals it receives between now and late February 2022, and will help to develop those concepts for a 12-month period.

After those projects are assessed, what researchers learn will go on to guide the design and build of one final flight-qualified fission power system, which will be launched to the Moon on a demonstration mission, hopefully sometime this decade.

Then, at long last, the Moon should have the beginnings of its very own power grid – and humanity’s base of operations in space will be on a new level to anything we’ve built before.

“The feedback and enthusiasm we continue to see for space nuclear power systems has been very exciting, and understandably so,” says senior engineer Sebastian Corbisiero, the Fission Surface Power Project lead at the DOE’s Idaho National Laboratory.

“Providing a reliable, high-power system on the Moon is a vital next step in human space exploration, and achieving it is within our grasp.”

This Is How Much Fossil Fuel The World Is Sitting on, And It’s a Time Bomb
Scientists Created ‘Living’ Synthetic Cells by Harvesting Bacteria For Parts
Scientists Are About to Fire Up The Most Powerful Laser in The US
Even Unborn Babies Find The Taste of Mom’s Kale Salad Repulsive
Octopuses Have Favorite Arms They Use to Grab Different Prey