Perseverance hasn’t even been on Mars for two months, and already the latest in red planet rovers is picking up some of Curiosity’s excellent habits.

No, not science; well, at least not just science. Percy is proving just as adept as her predecessor at snapping brilliant selfies, as the most recently sent images show.

As the rover settles into its new home in the Jezero Crater, it’s been sending back images of its surroundings, including parts of itself. We’re still waiting for a full-body pic, but on April 6, using the SHERLOC WATSON camera attached to its robotic arm, Perseverance took images of its ‘head‘ and ‘face‘. 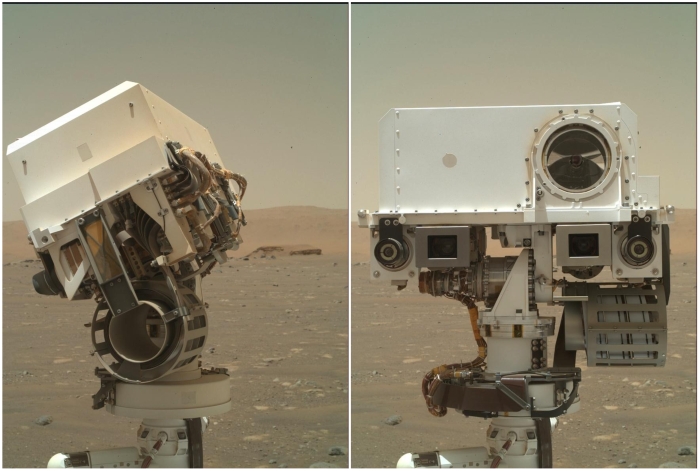 In official terms, this is the mast, on top of which is mounted cameras the rover uses to image Mars.

The large round one is the SuperCam, equipped with a laser and a spectrometer for analyzing rock samples; below it, the two rectangular lenses are the Mastcam-Z, which takes high-definition color, 3D and panoramic images and video of Percy’s surroundings.

At the very bottom of the images, jutting out of Percy’s ‘neck’, is the Mars Environmental Dynamics Analyzer, which is equipped with sensors to monitor Mars’ weather – including the quantity and particle size of the planet’s ubiquitous red dust.

Portrait of the Artist as a Young Bot

The first weather report from MEDA has only just come in from the day after Percy touched down on Mars, showing that the temperature in the crater was minus 20 degrees Celsius, dropping to minus 25.6 degrees Celsius within 30 minutes. The atmosphere was also cleaner than the atmosphere in the Gale Crater, home to Curiosity, at the same time. 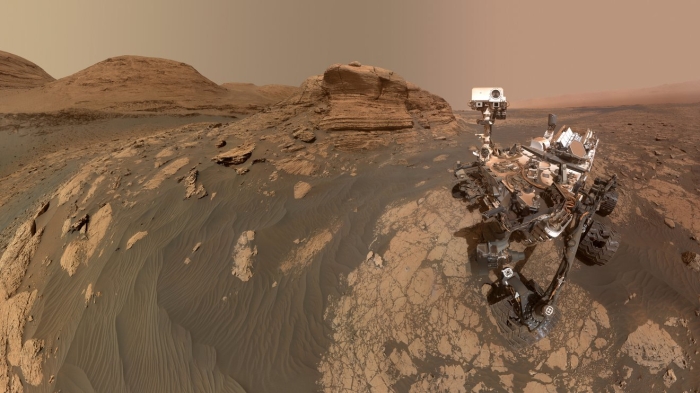 Curiosity, meanwhile, is still beavering away, and sending selfies of its own. On 26 March, it took a panoramic image of itself and the landscape around it, including a rocky outcrop called Mont Mercou.

You can see, from the image, just how dusty a rover can get after eight and a half years on Mars: Curiosity is coated in a layer of the stuff, and it has collected on her chassis.

We have no fear of Curiosity – or Perseverance, for that matter – going the way of Opportunity, which lost power after dust obscured its solar panels. Both Curiosity and Perseverance are powered by the radioactive decay of plutonium, which can keep them going even when raging dust storms circle the entire planet.

The next step for the Perseverance mission is the flight of Mars helicopter Ingenuity. Ingenuity detached from Percy on 3 April, and has survived its first step – a freezing night on Mars, which can damage delicate components.

The first flight is scheduled to take place sometime on or after 11 April, after which – beginning at around around 3:30 am EDT Monday 12 April – NASA will host a livestream confirming the attempt. You can find details on where to watch on the NASA website.

An Expert Explains Why The Radioactive Water Stored at Fukushima Should Be Released
Scientists Create Shapeshifting Humanoid Robot That Can Liquefy And Reform
A Rare Green Comet Can Be Seen in The Sky, And It May Be Our Last Chance
This Asteroid Has Survived For 4 Billion Years. That Could Be a Huge Problem
New NASA Nuclear Rocket Plan Aims to Get to Mars in Just 45 Days