A shock discovery is in from Bennu. The NASA spacecraft analysing the asteroid has observed it shooting out plumes of dust that surround it in a dusty haze – a phenomenon we’ve never seen in an asteroid before.

In the months that OSIRIS-REx has been studying Bennu, the spacecraft has observed this ejecta no fewer than 11 times. Since we’ve never seen such a thing, it suggests our understanding of asteroids may be pretty poor.

“The discovery of plumes is one of the biggest surprises of my scientific career,” said principal investigator Dante Lauretta of the University of Arizona.

OSIRIS-REx has been making observations of Bennu since December last year, when it parked itself in orbit around the asteroid. Its aim is to study the rock to learn about the early Solar System, since it’s thought Bennu formed at that time.

And, ambitiously, the craft is going to be taking a sample from the asteroid with a robotic arm, with intention to bring it back to Earth.

So far, the plumes have not been officially included among findings already published about Bennu, which are detailed in a series of papers out this week in Nature Astronomy.

Scientists discovered the first plume on 6 January, and the team then kept a careful watch for further activity. Over the following two months, they observed the plumes a few more times, and kept track of the particles of dust therein.

Some of the dust got blown out to space; other particles were recaptured in Bennu’s orbit, most of them falling back down to the asteroid’s surface. At least four chunks, however, stayed in Bennu orbit – perhaps on their way to becoming miniature asteroid moons.

The plumes don’t pose a risk to OSIRIS-REx – but that’s about all we know about them (aside from the indication that maybe asteroids are much more active than we thought). The OSIRIS-REx team is trying to find out more – where they come from, and what triggers them.

“We have had spacecraft around other asteroids, and nothing like this was ever reported,” planetary astronomer Andrew Rivkin of Johns Hopkins University in Maryland told New Scientist. “The question is, why is this asteroid different?”

We’ve seen plumes before, but Bennu’s activity may not bear similarities to the plumes ESA spacecraft Rosetta observed on Comet 67P. Those ones were dusty, but astronomers think they may have been caused by volatile ices sublimating in cavities beneath the comet’s surface, causing the cavities to collapse and spew the dust outwards.

Meanwhile, asteroids do not contain ice; in fact, it’s one of the big differences between comets and asteroids. It’s not impossible that Bennu contains ice under its surface, although its orbital position is too warm for it to have formed there. The only way it could contain ice is if it formed farther out in the Solar System, and somehow made its way closer in.

Among other discoveries, scientists at the Southwest Research Institute found minerals similar to meteorites called carbonaceous chondrites, which are known to be rich in volatiles and show evidence of interactions with water or ice.

That could mean that ice was plentiful in the planetary disc during the time in Solar System’s formation when Bennu came into being. 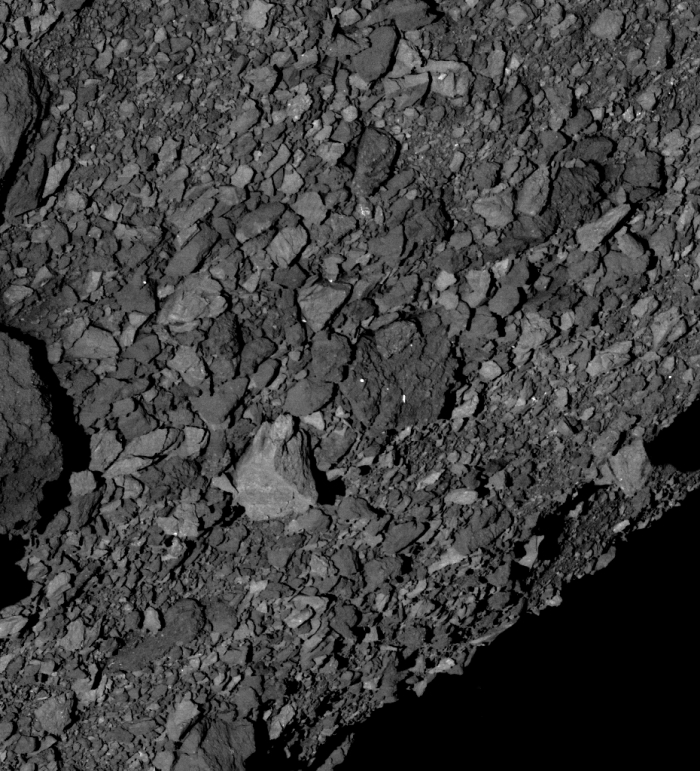 The sample OSIRIS-REx is due to collect could reveal more – but it’s proving a bit harder to grab than initially thought. That’s because Bennu’s surface is covered with chunky boulders, which present hazards for sample collection.

The science team has therefore had to adjust the parameters of the sample collection site – and adjust their approach. A smaller sample site means OSIRIS-REx’s descent will have to be more accurate.

It also means the team can rework the surface model that predicted Bennu would be relatively boulder-free with new data that will hopefully lead to more accurate future modelling.

“The first three months of OSIRIS-REx’s up-close investigation of Bennu have reminded us what discovery is all about – surprises, quick thinking, and flexibility,” said planetary scientist Lori Glaze of NASA.

Findings about the asteroid have been detailed in a special issue of Nature Astronomy.

Scientists Have a Plan to Turn Earth Into a Giant Observatory
This Rembrandt Has Been Hiding a Surprising Secret For Centuries
This Asteroid Has Survived For 4 Billion Years. That Could Be a Huge Problem
There’s a ‘Lost City’ Deep in The Ocean, And It’s Unlike Anything We’ve Ever Seen
People Who Don’t Exist Look More Real Than Actual People, Study Finds