A new image snapped by a spacecraft orbiting Mars could be enough to give one Lovecraftian nightmares.

Far below the camera of ESA’s Mars Express, a large, city-sized, unnamed crater gapes on the surface of the red planet, smears of dark material making it appear like an enormous eye gazing out to the stars. Yet the purpose of the image is not to give you the cosmic shivers; satellite imagery can help us better understand the geology and history of Mars.

Lowell, and many of the craters in the region, are thought to have been gouged out by massive impacts some 4 billion years ago, during a violent period of the early Solar System known as the Late Heavy Bombardment.

Earth, too, was bombarded, a process thought to have seeded the baby planet with water and organic compounds, but atmospheric and seismic processes have erased much of the evidence from our planet’s surface.

On Mars, barren and geologically much quieter, the evidence remains, giving us a tool for understanding more turbulent times in the Solar System’s history.

A topographical map of the region, compiled from Mars Express data. (ESA/DLR/FU Berlin)

Regions like the Aonia Terra can also reveal hints about the composition of Mars. A violent impact excavates material that might otherwise be hidden below the surface, creating new surface geologies and compositions. The region shown in the new image suggests that the surface composition here is complex and varied.

The unnamed eye crater sits in terrain carved out by channels, probably created by rivers of liquid water running across the surface billions of years ago. In these channels, traces of darker material can be seen, and some of them even appear to be raised – perhaps a result of erosion-resistant material settling in dried-up riverbeds, and remaining even when the walls of the river are blown away by windstorms.

Smaller craters and flat-topped buttes appear in the region south of the crater, while the region to the north is smoother, and paler in color. 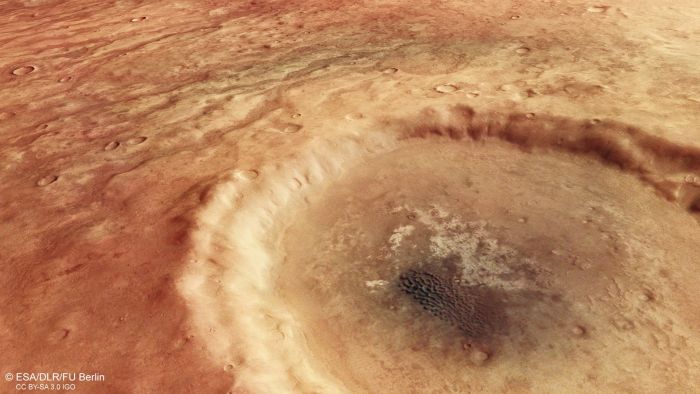 A perspective view of the crater. (ESA/DLR/FU Berlin)

More detailed information about the crater and its surroundings, could be revealed by closer observations and a wider suite of instruments, but it’s hugely impressive what we can learn even from images obtained at such a distance. The High Resolution Stereo Camera captures information not just about the colors of minerals, but the altitude of features, giving a comprehensive dataset about the surface of Mars.

And in case you’re still worried, none of those data are indicative of any eyes, anywhere on Mars. But that doesn’t mean there aren’t any… when you stare into the red void, does the red void stare back?

Tonga volcano blasted out pressure waves “very close to the theoretical limit”
There’s a change happening to Earth’s outer core, as revealed by seismic wave data
This plant lurks underground to trap prey in a way we’ve never seen before
‘Happy’ and ‘sad’ music might not be nearly as universal as we thought
After the largest extinction event on Earth, these animals were the first to recover