An invisible force is having an effect on our Universe. We can’t see it, and we can’t detect it – but we can observe how it interacts gravitationally with the things we can see and detect, such as light.

Now an international team of astronomers has used one of the world’s most powerful telescopes to analyse that effect across 10 million galaxies in the context of Einstein’s general relativity. The result? The most comprehensive map of dark matter across the history of the Universe to date.

It has yet to complete peer-review, but the map has suggested something unexpected – that dark matter structures might be evolving more slowly than previously predicted.

“If further data shows we’re definitely right, then it suggests something is missing from our current understanding of the Standard Model and the general theory of relativity,” said physicist Chiaki Hikage of the Kavli Institute for the Physics and Mathematics of the Universe. 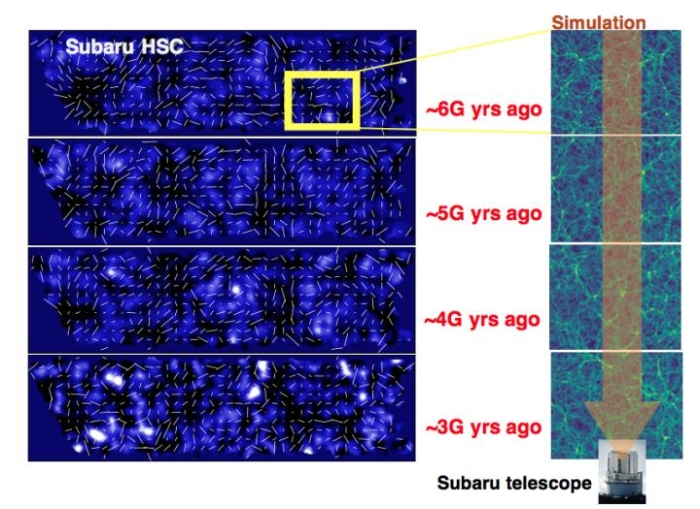 Visualisation of the dark matter map (lighter = more dark matter) based on the lensing produced by galaxies, indicated by white lines. (HSC project/UTokyo)

We don’t know what dark matter is. What we do know is that the gravitational effects we see in the Universe cannot be accounted for by observable matter alone. For example, the rotation speed of galaxies would be quite different if it was based solely on the gravity from observable mass.

This is a common method to find dark matter, and it’s what Hikage’s team used too. They deployed the 8.2-metre Subaru telescope‘s 870-megapixel Hyper Suprime-Cam to reach galaxies billions of light-years away.

Because their light has taken so long to reach us, we’re seeing them as they existed billions of years ago, which means the map covers a large swathe of the Universe’s history, allowing the astronomers to observe how dark matter has evolved over billions of years.

The resultant 3D map reveals the lumpy layout of the Universe’s dark matter, consistent with the findings of previous research – except for the speed at which the structures are evolving. According to this new map, it’s happening more slowly than predicted by previous results.

Not by much, but enough to stand out as strange. That said, the jury is still out on what it means. It could indicate that there is something missing from the Standard Model, which would be pretty amazing; or it could indicate a statistical fluctuation in the data.

It could be a while before we find out, too. The team has been working on this project since 2014, using just the first year’s worth of observations, or 11 percent of the Hyper Suprime-Cam’s survey, which hasn’t even finished yet. The picture-taking is scheduled to conclude in 2020 sometime.

So let’s not get too excited – there’s still a whole mothership-load of work to be done. But it’s still an intriguing result, and we’ll be awaiting more information with bated breath.

“With a little more work, if we can get better accuracy, we might be able to find something concrete,” Hikage said. “This is a big motivating factor for me.”

The team’s research has been accepted into the Publication of Astronomical Society of Japan, and can be read in full on pre-print server arXiv.