You know how stars do. They’re out there, doing their thing, fusing a whole bunch of hydrogen into helium, shining up the joint.

But some stars are just a little bit different from the norm. Not content with simply lighting up the night sky like a giant disco, they zoom, shimmer, dim and even hang around seeming to be older than the actual Universe.

These are our galaxy’s oddballs, and we love each and every one. 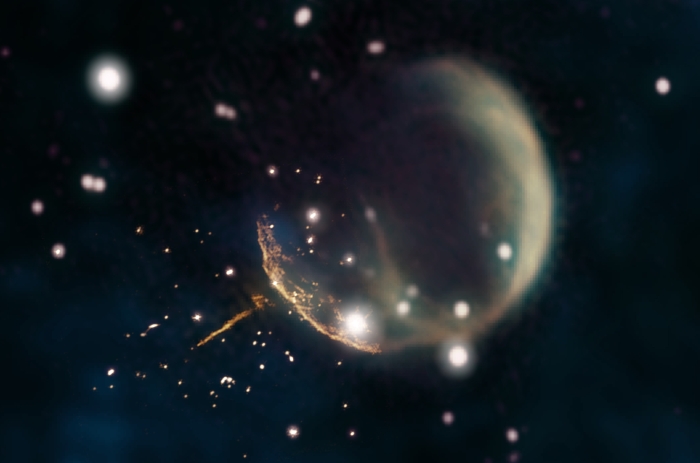 We’re not sure where the star named PSR J0002+6216 is headed, but we know it’s heading there fast. It’s travelling at the absolutely breakneck speed of 1,130 kilometres per second (700 miles per second). That could take it from Earth to the Moon in six minutes.

It’s one of the fastest stars we’ve ever seen.

There are a few of these runaway “hypervelocity” stars in the Milky Way, but few with origins as clear as J0002. It’s a pulsar, a type of rapidly rotating neutron star – the collapsed core of a massive star after it has gone supernova.

It was ejected from the expanding cloud of a recent supernova explosion, leaving a trail behind after it punched through the explosion’s outer shell of debris. The supernova was so powerful it kicked out the star and sent it careening through the galaxy.

Pulsar RX J0806.4-4123 – another dead star – has been observed emitting infrared radiation over long distances. By itself, that’s not so unusual – but RX J0806.4-4123’s extended emission is only infrared. That’s never been seen before; usually we see pulsars through X-ray and radio emissions.

“We observed an extended area of infrared emissions around this neutron star … the total size of which translates into about 200 astronomical units (or 2.5 times the orbit of Pluto around the Sun) at the assumed distance of the pulsar.”

There are two possible explanations: a fallback disc of material that coalesced around the star after the supernova – basically the dead star’s own material, interfering with its typical emissions. This could have implications for our understanding of neutron star evolution.

Or it could be a pulsar wind nebula, created when a powerful wind from a pulsar blows back the material left over from the star’s explosion, hollowing out a cavity in the nebula. But these are usually seen in the X-ray spectrum. An infrared-only pulsar wind nebula would be a new and exciting discovery indeed. Last year, hidden away in a sinuous cloud of glowing dust, astronomers found something amazing: a binary star called Apep that’s right on the verge of a spectacular supernova. And when it goes, there’s a good chance it will spew out a gamma-ray burst, releasing more energy in 10 seconds than the Sun could in 10 billion years.

Never before have we observed a gamma-ray burst in the Milky Way.

The two stars are unusual, too – Wolf-Rayet stars. These are very hot, very luminous, very old stars that typically have at least 25 times the mass of the Sun, which they lose at a tremendous rate. Because this stage of a star’s life is so short, we don’t see many of them at all.

As the two stars orbit each other, they churn the mass they’re shedding into a spiral shape, much like a lawn sprinkler, creating a rare type of nebula called a pinwheel. 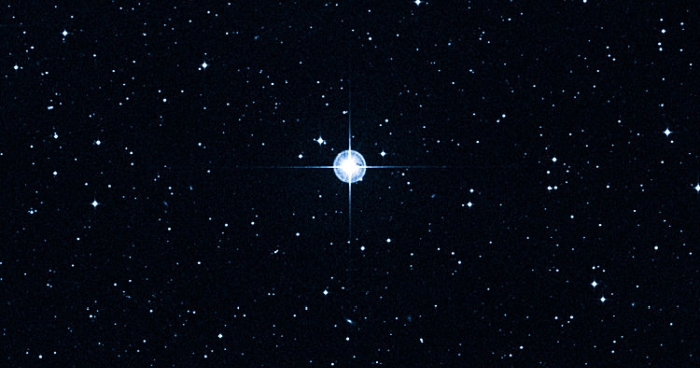 HD 140283 is a very peculiar star indeed. It’s old – super old. As in, beginning of the Universe old. That’s not terribly uncommon; the Milky Way is speckled with old stars here and there. But none of those others seem to be older than the Universe itself.

Look, there was a margin for error of 800 million years – which means, even according to those calculations, it could easily still be younger than the Universe. And it would actually have to be, unless our understanding of the Universe is wrong. 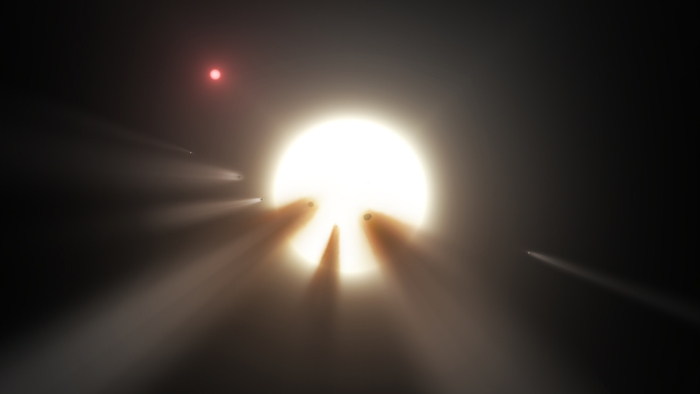 The hype has died down now, but we don’t think we’ll ever stop being deeply curious about the secrets of KIC 8462852, AKA Tabby’s Star. Discovered by astronomer Tabetha Boyajian of Yale University, it showed some really unusual behaviour of brightening and dimming.

The fluctuations are not of the regular kind you’d expect from orbiting planets, or a variable star. It’s seemingly random, with bright and dim periods lasting for arbitrary amounts of time, and it darkens by as much as 22 percent.

Some wavelengths are blocked more than others – which rules out an “alien megastructure” such as a Dyson sphere; also, it’s too old to still have enough of a protoplanetary disc remaining to cause that level of light blockage.

Other theories include a ringed planet passing in front of the star, either absolutely enormous or a smaller one with an orbital wobble; a swarm of comets; space junk; the star swallowing a planet; something happening inside the star itself; and the scientific equivalent of a shrug emoji.

The most likely culprit is some sort of dust, and a heckton of it, but it’s also possible we’ll never really know. ¯_(ツ)_/¯

If you thought KIC 8462852 was fascinating, wait until you hear about EPIC 204376071. Earlier this year, astronomers reported that something blocked the light of this star – a mere 440 light-years away – by up to 80 percent for an entire day.

It dimmed quite suddenly, hit that peak of 80 percent and then brightened again more slowly, probably because something was passing in front of it. But what?

The closest match for the light curve would be a tilted ring system orbiting the star; it would have to be very large however, and the model didn’t exactly fit – it required a tighter orbit than was possible based on the 160-day observation period.

Astronomers are taking more measurements of the star to try and figure out if something is orbiting it, so we just have to sit tight for now. The suspense is killing us!

Now, this star is just an absolute legend of weirdness. It’s called HD 101065, or Przybylski’s Star, and nothing about it is really normal. It belongs to a class called rapidly oscillating Ap stars. That means it’s a subtype of the chemically weird Ap star class (the p stands for ‘peculiar’) whose light pulsates very quickly.

Yet the star itself has a very slow rotation: HD 101065 rotates just once every 188 years. That could be due to unusual chemistry, as Ap stars tend to have. Except HD 101065 has a chemistry like no other Ap star.

It has low amounts of iron and nickel, but high amounts of heavy elements such as strontium, caesium, uranium and neodymium. In addition, it seems to have a high level of elements called actinides – the only star in which they’ve been found.

These are the heavy elements with atomic numbers from 89 through 103, from actinium through lawrencium, all of which are radioactive. They appear in HD 101065 as short-lived radioactive isotopes – which is pretty baffling, since their short half-life means they should be long gone.

The best explanation is that these actinides are the decayed form of as-yet unknown and long-sought super-heavy elements hypothesised to exist somewhere out there in the Universe. Whoa.

Magnetars are some of the strangest dead stars out there, and XTE J1810-197 is pretty much the strangest of them all. They’re neutron stars that, somehow, have incredibly intense magnetic fields, around a quadrillion times stronger than Earth’s.

XTE J1810-197 is one of just four of the 23 known magnetars that emit radio waves, and it was doing this pretty reliably up until about 2008. Then it went absolutely radio silent – until December of last year, when its radio activity started up again.

But something was different. The activity was less dramatic, the pulse profile more subdued, with millisecond-scale oscillations that could potentially be related to surface waves in the stellar crust as the magnetic field shifts.

We still don’t understand these strange beasts of stars, but continuing to monitor XTE J1810-197 could pony up a few clues.

It’s been accreting matter from a nearby binary companion, and spewing out something called relativistic jets. These are not uncommon for neutron stars, as well as active black holes – high-speed jets of plasma, shooting out from the neutron star or black hole perpendicular to the accretion disc.

Scientists don’t know the precise mechanism behind jet production. They think material from the innermost rim of the accretion disc is funnelled along magnetic field lines, which act as a synchrotron to accelerate the particles before launching them at tremendous velocities.

Swift J0243.6+6124 puts paid to that. But it also provides a new source for testing how magnetic fields affect the launching of jets, so that’s pretty neat.

Blowin’ in the Wind: Mira

Mira is dying. One part of it, Mira A, once bright like the Sun, is a red giant now, shucking off its outer layers over time, its light brightening and dimming, with a regular 11-month cycle. It’s only visible to the naked eye as part of the constellation Cetus for one month in that cycle.

It has a binary companion, Mira B, a dead star called a white dwarf – the evolutionary end-point of stars not massive enough to collapse into a neutron star. This white dwarf is accreting the matter being shucked off by Mira A – and, fascinatingly, this seems to be starting to form a protoplanetary disc, previously only thought possible with very young stars.

Baby planets forming around a dead star – how poetic. There’s a science fiction novel in that.

As the entire system moves across the night sky, it is leaving a trail of shed material in its wake. This ‘tail’ looks a bit like a comet – if a comet could trail material 13 light-years behind it.

Expert Proposes a Method For Telling if We All Live in a Computer Program
What Would Dinosaurs Look Like Today If They Never Went Extinct?
Scientists Glimpse Incoming Asteroid Just Hours Before It Makes Impact
The Milky Way’s Halo of Stars Isn’t The Neat Sphere Astronomers Expected It to Be
Ancient Traces of Burnt Food Reveal a Surprising Truth About The Paleo Diet