Back in August, the crew of the International Space Station (ISS) was surprised to learn that a leak was responsible for a slight loss in air pressure aboard the station.

After investigating, they learned that the cause was a small hole in the Russian Soyuz spacecraft that had docked with the ISS. While the hole was promptly sealed, the cause of it has remained a mystery ever since.

To determine a possible cause, and inspect the external hole on the spacecraft, the crew of Expedition 57 conducted an “unprecedented spacewalk” on Dec. 11th.

After collecting samples from the outside of the craft, flight engineers Oleg Kononenko and Sergey Prokopyev concluded that the hole had been drilled from inside the capsule, a finding which raises even more questions.

During the course of the spacewalk, Kononenko and Prokopyev unsealed the thermal insulation and meteorite shield on the spacecraft to inspect the hole more closely. They also took digital images of the hole and obtained samples which have since been returned to Earth with the capsule (on Dec. 11th) for further analysis.

Initially attributed to a micrometeorite, the hole was quickly determined to be the result of drilling. The hole posed no threat to the station or its crew, since it was very small and caused a minute drop in air pressure. Nevertheless, after mission controllers and the crew identified the source, they wasted no time plugging the hole with epoxy and gauze.

The results of the crew’s analysis were shared during a press conference shortly after Prokopyev and crewmates Serena Aunon-Chancellor (NASA) and Alexander Gerst (European Space Agency) returned to Earth. The hole posed no threat during their return because the section it appeared in was jettisoned before re-entry into Earth’s atmosphere.

As Prokopyev indicated, the cavity started from the capsule’s interior (meaning that it was drilled from the inside) and that Russian law enforcement agencies are investigating what caused it. Prokopyev also dismissed rumors that the hole had been drilled deliberately, which had emerged as a result of a statement he made back in September. 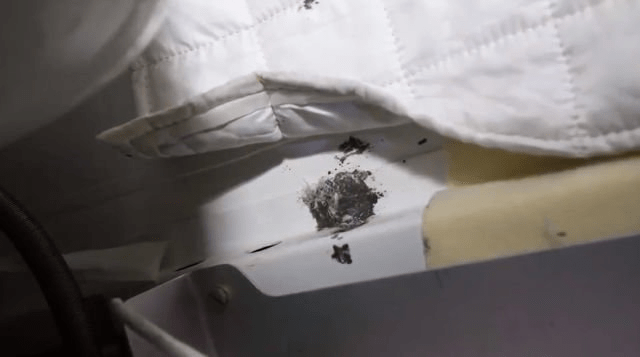 At that time, Rogozin had said that they were not prepared to rule out the fact that the hole had been deliberately drilled, either when it was manufactured or while it was in orbit. This spawned rumors that the drill hole may have been part of a sabotage attempt. The rumors was further inflamed by statements made by former cosmonaut and Russian politician Maxim Suraev.

On September 4th, during a discussion about the leak in the State Duma, Suraev spoke frankly about the possibility that mental instability could have played a role. “We are all living people, everyone may want to go home, but this method is completely unworthy,” he said. “If it is the cosmonaut who did it, and this cannot be ruled out, then it is absolutely bad.”

On September 6th, he once again explored this possibility, adding:

“But if it happened in space, and it will be established by the commission, then I can once again confirm that only a fool, flying in space, a mentally unstable person, can begin to drill a hole out, because there is a vacuum, because you are not only yourself you are endangering, but the lives of five people besides yourself. You are insane, which means you get it. But I don’t blame anyone.”

Rogozin has since walked these statements back and claimed that the news media had twisted his words. At the time, he was clear that an investigation would determine the true cause, even if sabotage was a remote possibility. During the press conference, Prokopyev also dismissed the idea that the hole could have been deliberately drilled by an astronaut. “You shouldn’t think so badly of our crew,” he said.

These latest statements have not done much to deter speculation about what caused the drill hole. However, both NASA and Russian authorities remain adamant that the cause of the hole remains unknown and will be investigated fully. As Prokopyev summarized during the conference, “it’s up to the investigative organs to judge when that hole was made.”

He was also sure to point out that this incident demonstrated the level of the ISS crew’s readiness. The way the astronauts quickly identified and repaired the hole demonstrated that “the crew was ready for any developments,” he said. Meanwhile, operations aboard the ISS continue, with Expedition 58 commencing operations on Dec. 20th.

The crew is commanded by Oleg Kononenko (who helped seal the hole and participated in the spacewalk) and includes NASA astronauts Anne McClain and David Saint-Jacques as flight engineers.