There is no dark side of the Moon. But there are dark spots on it – specifically at the bottom of craters that are never reached by any sunlight no matter where the Moon is facing.

These areas have intrigued scientists for decades, in no small part because lack of sunlight means a lower temperature, allowing frozen materials to stay frozen. In other words, there may be water in them thar craters. And water will be the lifeblood of any future permanent crewed lunar mission.

Unfortunately, lack of sunlight also means it’s challenging to see what’s at the bottom of those craters.

The closest scientists have come was when LCROSS, a NASA moon mission, fired a projectile into the crater Cabeus and analyzed the resultant dust cloud, which contained a relatively high amount of water.

But so far, no one has been able to image what water is in those craters directly.

That is not to say the craters are illuminated at all. Even when they are not in direct sunlight, reflected sunlight, some of which might have bounced off nearby hills, is still channeled into the crater.

But any images captured using that reflected light are too “noisy” to make out any detailed features.

Enter a new technique developed by scientists at the Max Planck Institute for Solar System Research (MPS) in Germany.

They used an AI algorithm called the Hyper-effective nOise Removal U-net Software (HORUS). HORUS’s primary goal is to “clean up” the noisy images of the bottom of unlit craters collected by other spacecraft, such as the Lunar Reconnaissance Orbiter (LRO).

Above: An as-yet-unnamed crater. The left image shows a picture taken by the LRO. Its interior is almost not visible. The right image shows the same image after it was processed with HORUS.  (Left: NASA/LROC/GSFC/ASU; Right: MPS/University of Oxford/NASA Ames Research Center/FDL/SETI Institute)

In addition to removing noise, the software must also correct for other factors, such as the movement of LRO itself.

Despite such difficulties, the researchers used 70,000 images from LRO to calibrate the software, which was then unleashed upon 17 different permanently dark regions at the lunar south pole.

With the new software, the image of the bottom of the crater is improved significantly. Unfortunately, the photos don’t show any direct evidence of water, such as bright patches that would indicate ice.

However, any crewed mission that wants to look for water in or under the regolith of these craters will first need to know what terrain it is entering. 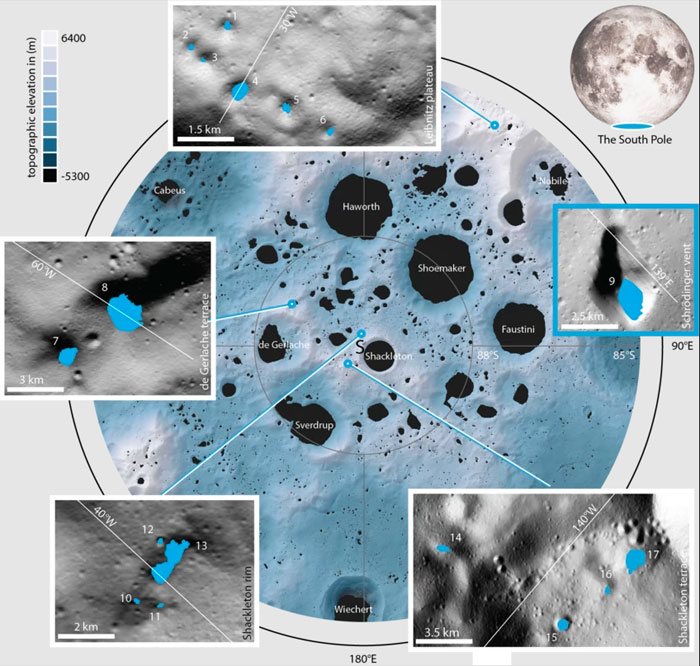 Above: Some of the craters at the lunar south pole that were part of the study. (MPS/University of Oxford/NASA Ames Research Center/FDL/SETI Institute)

Defining such terrain is where HORUS shines – the researchers could make out geological features a few meters across, which could be potentially hazardous to a lander or rover.

This was the first step toward exploring these previously invisible parts of the Moon. With luck, someday, humans will be able to explore these areas safely, and with even more luck, they might find a source of an essential ingredient of all Earth-bound life.

This Trait of Red Dwarf Star Systems Could Help Us Resolve The Red Sky Paradox
Astronomers Think They’ve Figured Out How to Predict When a Supernova Will Occur
There’s Trouble Bubbling Up in Newly Formed Alaskan Lakes, And Scientists Are Worried
REM Sleep May Exist to Heat Your Brain Up From The Inside
Giant Study of 20 Million People Reveals Who Can Help You Get Jobs