Every 200,000 to 300,000 years, Earth’s magnetic poles reverse. What was once the north pole becomes the south, and vice versa. It’s a time of invisible upheaval.

The last reversal was unusual because it was so long ago. For some reason, the poles have remained oriented the way they are now for about three-quarters of a million years. A new study has revealed some of the detail of that reversal.

The related field of magnetostratigraphy studies the record of geomagnetic reversals that are contained in those rocks. By dating the rocks, researchers can construct a timeline of the Earth’s reversals.

The last reversal is named the Matuyama-Brunhes geomagnetic reversal after the co-discoverers: Bernard Brunhes, a French geophysicist, and Motonori Matuyama, a Japanese geophysicist. Over the years since its discovery, researchers have tried to understand exactly when it happened, and also how long it took.

The paper is published in the journal Progress in Earth and Planetary Science.

Lava flows are a reliable indicator of the orientation of Earth’s magnetic poles at the time the lava solidified. But what they can’t provide is a timeline. They’re more like snapshots that freeze a moment in time.

Lava flows are very helpful when it comes to understanding the Earth’s magnetic field at the time of solidification. “However, lava sequences cannot provide continuous paleomagnetic records due to the nature of sporadic eruptions,” lead author Haneda said in a press release.

A better record can be found in some sediment deposits, which can form over a long period of time. One of these deposits is called the Chiba composite section. It’s in Japan, and geophysicists consider it to be a very detailed record of the Matuyama-Brunhes reversal.

“In this study, we collected new samples and conducted paleo- and rock-magnetic analyses of samples from the Chiba composite section, a continuous and expanded marine succession in Central Japan, to reconstruct the full sequence of the Matuyama-Brunhes geomagnetic reversal,” Haneda said.

The Chiba composite section is widely considered to contain the most detailed marine sedimentary record of the Matuyama-Brunhes geomagnetic reversal, according to Haneda.

It serves as the international standard for the lower boundary of the Middle Pleistocene Subseries and Chibanian Stage — when Homo sapiens emerged as a species.

The Chiba composite section is notable for its well-preserved pollen and marine micro- and macrofossils. It also contains tephra beds. Tephra is a fragmentary material produced by volcanic eruptions, normally referred to as volcanic ash.

All in all, Chiba provides the most reliable chronostratigraphic framework of the time period around the Brunhes-Matuyama reversal.

What they found goes against what some other studies have uncovered, especially when it comes to how long the reversal took to occur. Some studies suggest it took several thousand years, while another suggested that the reversal was completed in one human lifetime.

The different time estimates depend largely on where on Earth researchers gather their evidence. This study based on the Chiba composite section says it took about 20,000 years, including a 10,000 year period of instability leading up to the reversal. 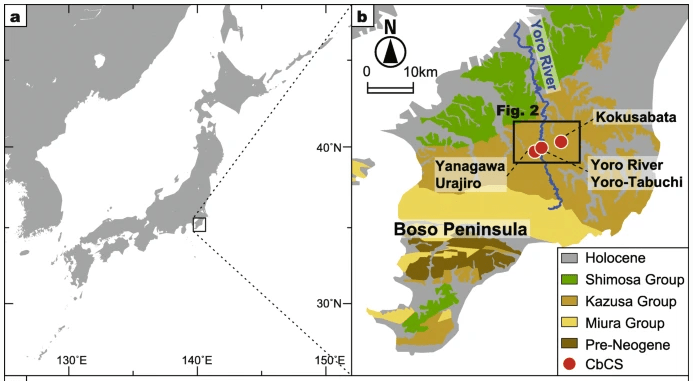 This figure from the study shows the location of the study area on Japan’s Boso Peninsula. (Haneda et al., 2020)

The question that looms over Earth’s geomagnetic reversals is ‘What effect do they have?’ That’s outside the scope of this study, but it’s the focus of other research.

Some researchers have wondered if magnetic reversals have contributed to climate change. While the evidence is nowhere near complete, some scientists have outlined how reversals might play a role.

In 2006 a team of researchers made a presentation to the American Geophysical Union’s Fall Meeting titled “Does the Earth’s Magnetic Field Influence Climate?“

When mentioning the accepted causes of climate change on Earth, the team said, “Magnetism has seldom been invoked, and evidence for connections between climate and magnetic field variations have received little attention.”

“The most intriguing feature may be recently proposed archaeomagnetic jerks. These seem to correlate with significant climatic events.”

Archaeomagnetic jerks are quick changes in the Earth’s geomagnetic field that are localized rather than global. While there’s only a correlation between them and climate, a causal link might one day be established. Could there also be a causal link between magnetic reversals and climate?

The effect that magnetic reversals have on animals is likewise a fascinating and open question. Many animals undertake long, migratory voyages. Whales, birds, and sea turtles, for example.

And there’s evidence that some migratory species rely on Earth’s magnetic field to navigate. The phenomenon is called magnetoreception.

How are creatures that rely on magnetoreception affected by geomagnetic reversals?

During a reversal, the magnetic poles not only switch places but the field strength drops. There may also be temporary poles at the equator or even multiple temporary poles. The poles can also wander around, leaving their original position and returning before eventually switching completely.

It’s not clear what effect a reversal has on animals. But there’s some evidence that solar storms, with all their magnetic activity, can create confusion for migrating whales and may even drive them to beach themselves.

During a reversal, the protective effect of the Earth’s magnetic field is reduced. More solar radiation may reach the surface of Earth during a reversal, which could put animals like whales in peril the same way a solar storm might. However, the evidence for this is not clear.

In any case, life on Earth has survived many geomagnetic reversals, and still, life thrives. Modern humans haven’t faced one yet, so observing the next one will be very instructive.

The most likely effect will be on our power and communications systems, including satellites. As the global magnetic field weakens, more of the Sun’s radiation can get through. We know from things like the Carrington Event that that scenario can be very damaging.

While this study can’t address all these questions, it does advance our understanding of the previous reversal.

Ripples in Space-Time Could Actually Reveal When Time Began
This Species of Carnivorous Plant Evolved Into a Toilet And Is Now Winning at Life
Shooting Tiny, High Speed Bullets at a Spacecraft Could Speed Up Travel to The Stars
Newly Discovered Fossil Reveals Hundreds of Teeth ‘Never Seen Before in a Pterosaur’
JWST Has Found Life’s Elemental Building Blocks in The Depths of Darkest Space