Terrestrial organisms stuck on the outside of the International Space Station (ISS) have survived 533 days in the vacuum, intense ultraviolet radiation, and extreme temperature variations of space.

You know what that means? It’s not impossible for life to survive on Mars.

Of all the planets in the Solar System, Mars seems like the most likely candidate to host life. But it’s extremely inhospitable – dusty, arid, lower in gravity and oxygen, subject to harsh radiation due to its thinner atmosphere, cold and wracked by dust storms that can plunge the planet into darkness.

We have yet to detect life there, but there are a few ways we can test how feasible its presence is. One is searching for life in Mars-like environments on Earth (spoiler: we found it). Another is using that most breathtaking of resources, the ISS.

The German Aerospace Center (DLR) led an experiment called BIOMEX, in which organisms such as bacteria, algae, lichens and fungi were exposed to Mars-like conditions aboard the space station.

We know, theoretically, that Mars has a bunch of the things we know life uses, including an atmosphere, elements such as carbon, hydrogen, oxygen, nitrogen, sulphur and phosphorus, water ice, and maybe even liquid water.

So, organisms were cultivated in Martian soil simulants (because of course we don’t have any actual Mars dirt, but we know what’s in it thanks to Mars rovers and can replicate it pretty well). Then, they were placed outside the space station in the Expose-R2 facility. 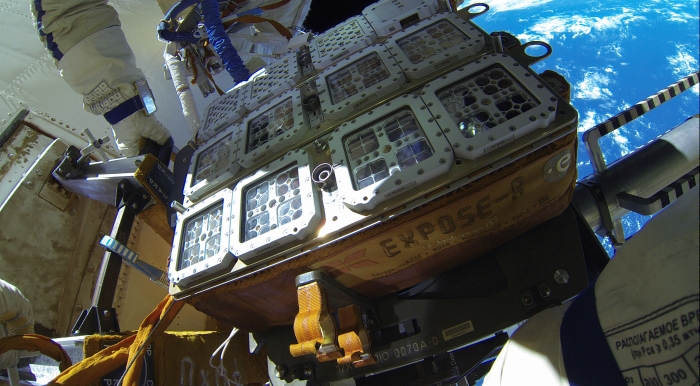 Hundreds of samples were included in the experiment, some with the soil simulant and a simulated Mars atmosphere to boot.

There they stayed for 18 months between 2014 and 2016 before being brought back down to Earth for analysis.

The results were impressive.

“Some of the organisms and biomolecules showed tremendous resistance to radiation in outer space and actually returned to Earth as ‘survivors’ from space,” said astrobiologist Jean-Pierre Paul de Vera of the DLR Institute of Planetary Research.

“Among other things, we studied archaea, which are unicellular microorganisms that have existed on Earth for over three-and-a-half billion years, living in salty seawater. Our ‘test subjects’ are relatives of theirs that have been isolated in the Arctic permafrost.

“They have survived in space conditions and are also detectable with our instruments. Such single-celled organisms could be candidates for life forms that might be found on Mars.”

The organisms hailed from a variety of harsh Earth environments, such as the Arctic, Antarctica, the European Alps, the steppe highlands of Spain, and permafrost. Organisms that can survive in such inhospitable conditions are known as extremophiles, and are considered the most likely sort of living thing that could exist on other planets (or moons Europa or Enceladus, for that matter).

By chucking them up in space in simulated Mars conditions, the researchers demonstrated that – in principle at least – they could survive on Mars. And this result adds a bit of support to the theory that life on Earth actually came from Mars 3.8 billion years ago, carried in on a meteorite that originated from the Red Planet.

“Of course, this does not mean that life actually exists on Mars,” de Vera said. “But the search for life is more than ever the strongest driving force for the next generation of missions to Mars.”

None of the equipment sent to Mars so far has detected life, or any telltale signs of it. But knowing that it could exist there – and what kinds of organisms are most likely to survive – will help to develop tools that could detect life on future Mars missions.

The results have been published in Astrobiology.

The Mysterious Asymmetry of Jupiter’s Asteroids May Finally Be Explained
Are Your Cats Playing or Fighting? Researchers Think They Can Tell The Difference
A Lost Interview With The ‘Father of The Big Bang’ Was Just Discovered
Incredible Footage Shows Planets Circling a Star Light-Years Away
Astronomers Studied More Than 5,000 Black Holes to Figure Out Why They Twinkle