We can’t see it with our naked eyes, but deep in the far reaches of the Universe is a galaxy that’s absolutely blasting out radiation. It’s called W2246-0526, and it’s emitting as much infrared radiation as 350 trillion Suns, making it the most luminous galaxy we’ve ever observed.

What’s its secret? Well, we’re not entirely sure, but a new discovery could have something to do with it.

As observations from the Atacama Large Millimeter/submillimeter Array (ALMA) have revealed, W2246-0526 is greedily slurping up material from at least three other galaxies in its immediate vicinity to feed its supermassive black hole.

Astronomers have observed tendrils of material snaking from neighbouring galaxies into W2246-0526. And, amazingly, these tendrils contain as much material as the galaxies themselves.

“We knew from previous data that there were three companion galaxies, but there was no evidence of interactions between these neighbours and the central source,” said astronomer Tanio Díaz-Santos of the Universidad Diego Portales in Santiago, Chile.

“We weren’t looking for cannibalistic behaviour and weren’t expecting it, but this deep dive with the ALMA observatory makes it very clear.” W2246-0526, located 12.4 billion light-years away, is a galaxy with a quasar at its core: an unusually bright active galactic nucleus, powered by a feeding black hole.

Quasars are among the most luminous objects in the Universe, spewing out light and radio emissions. These emanate from the material around the black hole, called an accretion disc.

This disc contains dust and gas swirling at tremendous speeds like water going down a drain, generating immense friction as it’s pulled by the massive gravitational force of the black hole in the centre. This produces absurd amounts of radiation.

In the case of W2246-0526, it’s absorbed by surrounding dust and re-emitted as infrared radiation, making the galaxy rarer still – a type of quasar known as a Hot, Dust-Obscured Galaxy, or (wait for it) Hot DOG. Only one in 3,000 quasars is a Hot DOG.

All this material pouring into the galaxy isn’t necessarily being incorporated into the supermassive black hole’s feast. Although the black hole is gargantuan – clocking in at around 4 billion times the mass of the Sun – there’s still a limit to how much material it can consume.

Some of the material, therefore, is just getting incorporated into the galaxy, and will likely be forming new stars. But there’s a catch there, too.

The black hole’s activity is so intense, it’s stirring up the gas across the entire galaxy – like a reservoir of water being boiled by a nuclear reactor in the centre, researchers said in 2016. The momentum and energy of the photons are so intense, it’s pushing the gas outward; eventually, this could tear W2246-0526 to shreds. 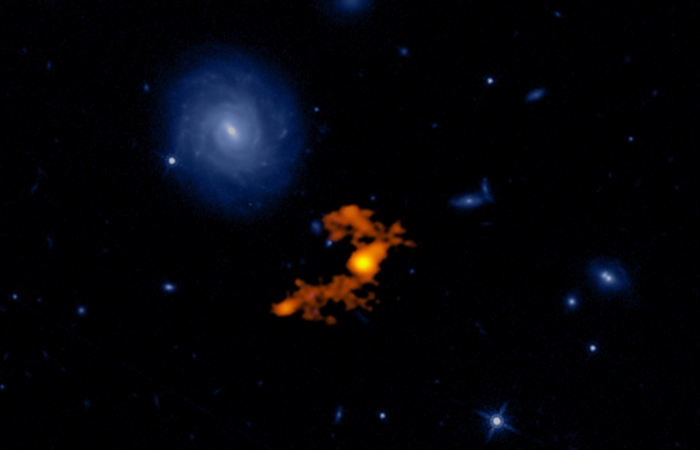 As far as galaxies go, W2246-0526 is pretty amazing. It’s already been established that it’s really freaking luminous, and really turbulent. These new findings also make it the most distant galaxy to be observed cannibalising multiple other galaxies – and also, as far as the researchers are aware, the only galaxy that far away that has been directly imaged doing so.

But there’s another perplexing mystery to be solved. Although the supermassive black hole is a behemoth, it should be bigger. The mass of a black hole sets an upper limit on the brightness of an active galactic nucleus – yet W2246-0526 is about three times more luminous than it should be for the black hole’s size.

What gives? The researchers don’t know yet. But they’ll have plenty of time to figure it out.

“It is possible that this feeding frenzy has already been ongoing for some time, and we expect the galactic feast to continue for at least a few hundred million years,” Diaz-Santos said.

New NASA Nuclear Rocket Plan Aims to Get to Mars in Just 45 Days
‘Extraordinarily Close’ Asteroid About to Zoom Past Earth, NASA Says
An Iceberg The Size of London Has Broken Free From Antarctica Ice Shelf
Bacteria Can Use Plastic Waste as a Food Source, Which Isn’t as Good as It Sounds
This Asteroid Has Survived For 4 Billion Years. That Could Be a Huge Problem