Isn’t it beautiful? This is an illustrated logarithmic scale conception of the observable Universe with the Solar System at the centre.

Created by musician and artist Pablo Carlos Budassi, the image is based on logarithmic maps of the Universe put together by Princeton University researchers, as well as images produced by NASA based on observations made by their telescopes and roving spacecraft.

The Princeton team, led by astronomers J Richard Gott and Mario Juric, based their logarithmic map of the Universe on data from the Sloan Digital Sky Survey.

Over the past 15 years it has been using a 2.5-metre, wide-angle optical telescope at Apache Point Observatory in New Mexico to create the most detailed three-dimensional maps of the Universe ever made, including spectra for more than 3 million astronomical objects.

Logarithmic maps are a really handy way of visualising something as inconceivably huge as the observable Universe, because each increment on the axes increases by a factor of 10 (or order of magnitude) rather than by equal increments. The Princeton team published them in the Astrophysical Journal back in 2005, but you can browse through and download them at this website.

While incredibly helpful, logarithmic maps aren’t much to look at, so Pablo Carlos Budassi decided to make something a bit more palatable.

According to Kelly Dickerson over at Tech Insider, he got the idea of turning it into a giant circle when making hexaflexagons for his son’s birthday one year.

Hexaflexagons are paper polygons with a deceptively large number of faces – you probably made them in school without knowing their proper name. 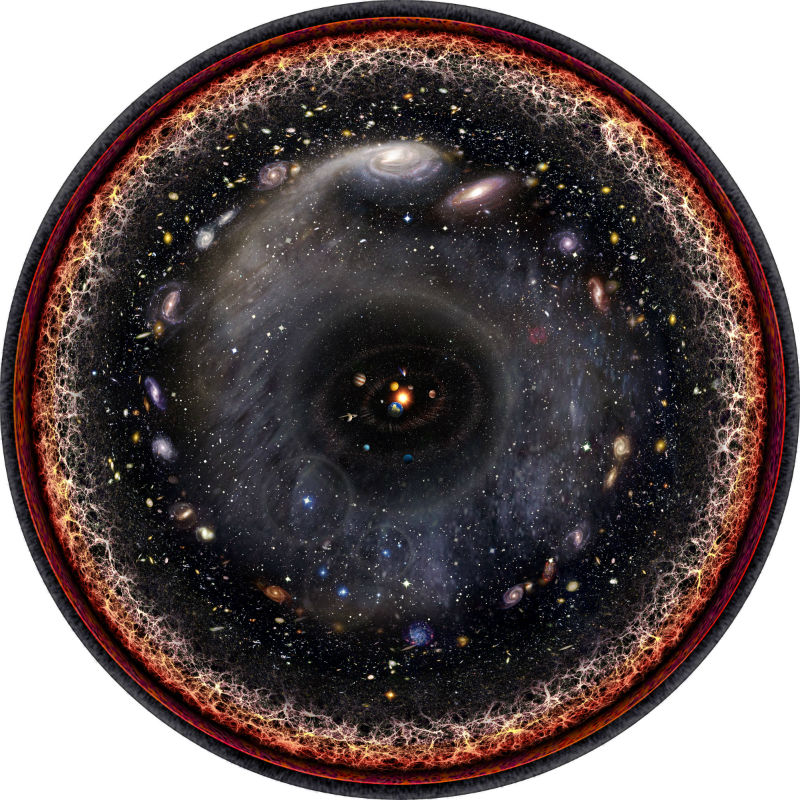 “[W]hen I was drawing hexaflexagons for my son’s birthday souvenirs, I started drawing central views of the cosmos and the Solar System,” Budassi told Tech Insider.

“That day the idea of a logarithmic view came, and in the next days I was able to [assemble] it with Photoshop using images from NASA and some textures created [on] my own.”

Head here for a full-sized version of the image by Budassi, and watch below to see a different kind of cosmic visualisation produced by astronomers at the University of Hawaii - this one is of our Milky Way galaxy, in relation to 100,000 neighbouring galaxies:

A version of this article was originally published in January 2016.

This Physicist Says Electrons Spin in Quantum Physics After All. Here’s Why
Lightning Strikes Create a Strange Form of Crystal Rarely Seen in Nature
Mysterious ‘Zone of Uncertainty’ Inside The Brain Reveals a Surprise
Bacteria Can Use Plastic Waste as a Food Source, Which Isn’t as Good as It Sounds
Astronomers Just Discovered a ‘Bear’ on Mars