We witnessed an amazing astronomical spectacle in the early morning skies over the Kuwaiti desert in November 1998. That year, the Leonid meteors put on a spectacular display, topping an estimated 1,000 meteors per hour near sunrise.

On most years, however, the Lion whimpers with a few paltry meteors per hour, but once every 33 years or so, the mighty Leonids can roar with an amazing display reaching storm level proportions.

Prospects for the 2020 Leonids

Unfortunately, 2020 is not projected to be such a year, but it’s always worth keeping an eye out during the early morning hours in mid-November. The 2020 peak for the Leonids is expected to arrive on Tuesday, November 17th, at around ~4:00 Universal Time (UT) or 11:00 PM EST (on the 16th).

The Moon is a waxing crescent just two days after new at this point, ideal for meteor watching. This also favors the longitude of Europe and Africa at dawn, another plus. The 2020 Zenithal Hourly Rate (ZHR) is expected to hit a moderate 15-20 meteors per hour.

The source of the Leonid meteors is periodic comet 55P/Tempel-Tuttle, which is on a 33-year orbit around the Sun. The next major peak for the Leonids is expected for the early 2030s around 2032-33, though circumstances this time around may prove to be less than favorable. 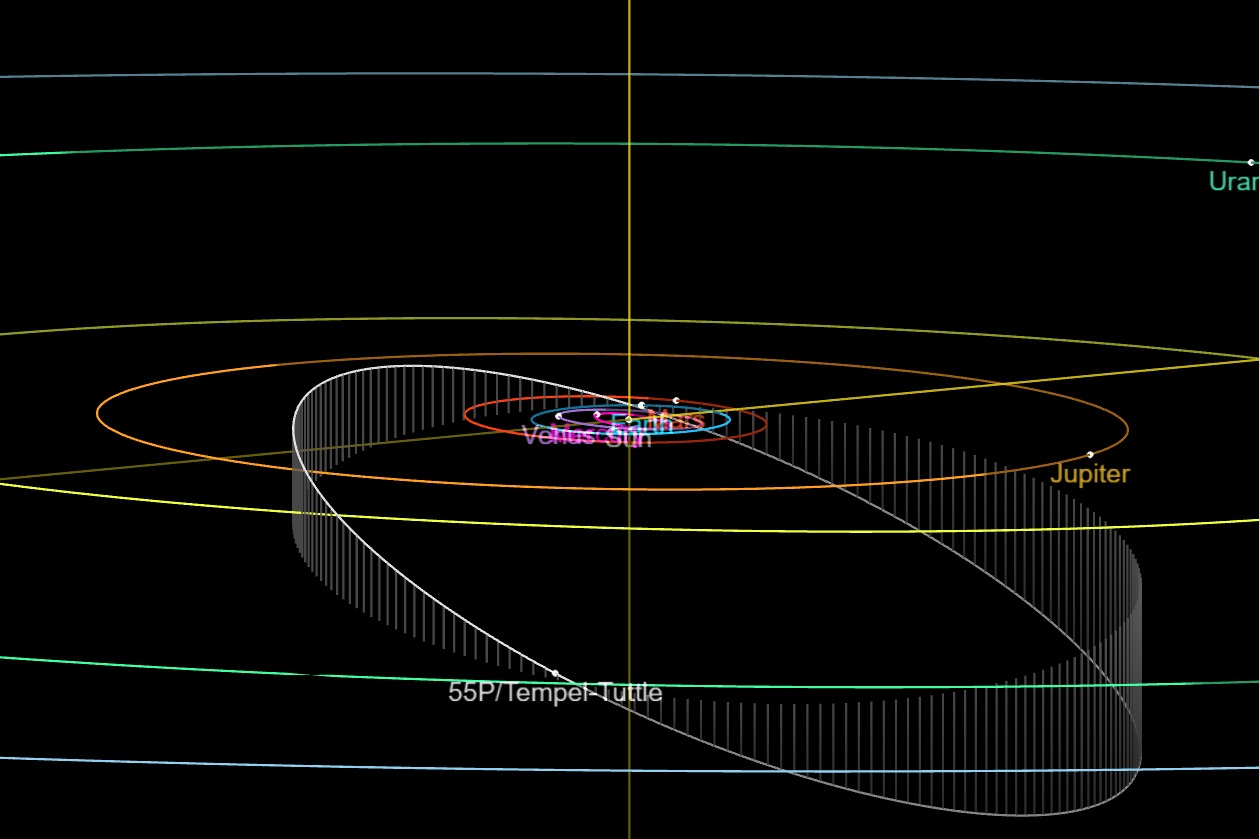 The orbit of Comet 55P/Tempel-Tuttle. (NASA/JPL)

It’s worth noting that in the late 1990s we were seeing enhanced rates over several years leading up to 1998, so what we see from the Leonids in the coming decade may be indicative of what we might be in for, come 2032.

The Leonids are one of the most notorious of meteor storm producers. On the morning of 13 November 1833, residents of the US Eastern Seaboard awoke to a truly terrifying sight, as the sky seemed to be awash with meteors, failing like rain.

1889 depiction of the 1833 Leonids, based on a first-hand account. (Adolf Vollmy/Public Domain)

Keep in mind, no one truly knew what meteors actually were until the late 19th century, or how they were related to the dust trails laid down by comets. In fact, the 1833 Leonids are cited as contributing to many of the religious fundamentalist revivals of the 1830s in the US… they were that influential.

Will the Leonids ‘ramp up’ in the coming decade? Keep in mind, the quoted zenithal hourly rate (ZHR) for a given shower is the number you would see with optimal conditions, under a dark, moonless sky with the radiant directly overhead… most of us will see considerably less.

Many neophyte observers get excited about the hype leading up to a meteor shower, only to be frustrated by the reality of seeing few if any meteors under light-polluted skies.

Be patient, and search out a good dark sky site for best results. Tracing a meteor trail back to the ‘Sickle of Leo’ asterism identifies its membership as a Leonid… otherwise, the meteor may be a background sporadic, or a member of another shower. 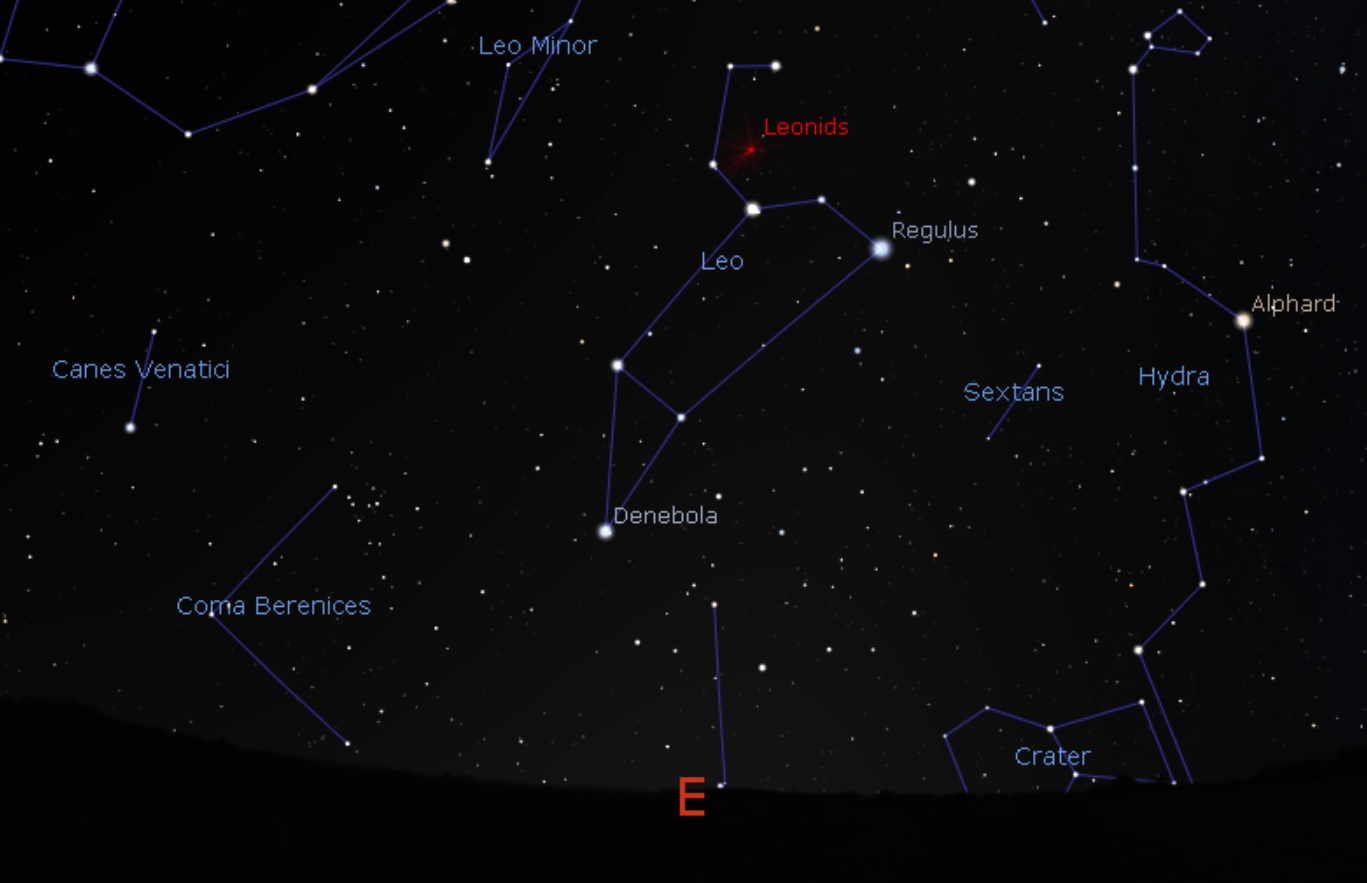 Its meteor trails appears to originate from the Leo constellation. (Stellarium)

In November, the Taurids are also active, and the December Geminids are also spooling up. For best results, watch in the early morning hours, when the Earth is meeting the Leonid meteor stream head-on.

Observing a meteor shower is as simple as bundling up, laying back, watching and waiting. We prefer to look about 45 degrees off to one side of the radiant for a shower to see meteors in profile, though honestly, they can appear anywhere in the sky.

If you’re observing with a friend, be sure to observe in opposite directions, to double your sky coverage. Also, be sure to keep a set of binoculars handy, as a brilliant fireball can often leave a lingering smoke train that can remain visible for over a minute or so.

You can also ‘hear’ meteors, or more accurately, the ionized reflection crackling in their wake along vacant swaths of the FM radio dial. You hear a similar phenomenon along the FM band during an intense lightning storm. Very occasionally, the radio reflections off of a meteor passage might even briefly bring a distant radio station into focus.

But can you actually hear meteors? This is a true and persistent phenomenon reported over the years by observers… as a kid, I remember hearing a distinct ‘hiss’ accompanying a brilliant Perseid.

Now, meteors are just dust grains burning up high in the atmosphere, far from the ground and unable to carry sound to the viewer… plus, unlike the clap of thunder you hear several seconds after you see a flash of lightning, the effect seems to be instantaneous.

The culprit appears to be what’s known as electrophonic sound, a local current induction set up off of nearby telephone wires, aluminum siding and even damp dewy grass surrounding the observer during the passage of a meteor.

Imaging meteors is also a straightforward affair: a tripod-mounted DSLR camera with a wide-lens covering a good swath of sky will do the trick. Use the manual ‘bulb’ setting to take a series of 1-3 minute exposures, and see what turns up.

Be sure to take a series of test exposures first, to get the balance of shutter speed/f-ratio/and ISO exposure just right versus the local sky conditions. Be sure to carefully examine the shots afterwards… nearly every meteor we’ve caught on camera was missed during naked eye observing.

I like to use a remote intervalometer to automate the process by setting the camera to record a series of 3-minute exposures, freeing me up to simply sit back and watch the show. Also, keep an extra set of camera batteries handy, preferably in a warm pocket; long exposures and cold November temperatures can drain camera batteries in a hurry.

Finally, don’t forget to keep a count of how many meteors you see, and report your observations to the International Meteor Organization. Amateur visual and radio observations of meteor showers all contribute to our efforts to understand how particular meteor showers evolve, and may even uncover new meteor streams.

Sure, the sky won’t come ablaze with a Leonid meteor storm in 2020, but it’s always worth watching for the stray streaks from the Sickle this coming week, and marveling at what can be.

Man Keeps Rock For Years, Hoping It’s Gold. It Turns Out to Be Far More Valuable
Colliding Neutron Stars Created a Neutron Star We Thought Too Heavy to Exist
Colossal Exoplanet Is One of The Most Massive Super-Earths Ever Discovered
Volcanoes May Have Transformed Venus Into a Blistering Hellscape
Roman Coins Once Thought to Be Fake Reveal a Long Lost Historical Figure