You step off the plane, having travelled across the world to the opposite hemisphere. The seasons are all backwards, and when you look up at the full Moon, you realise it’s not even the right way up!

Not only is this incredibly weird (mostly because, how did we not realise this before?), but this curious quirk of our round planet actually has surprising implications for researchers trying to investigate the night sky.

“From our perspective, the Moon and the night sky, is actually rotated 180 degrees compared to our Northern Hemispherical friends,” Jake Clark, an astronomer from the University of Southern Queensland in Australia, explained to ScienceAlert.

“In the south we see the Moon’s dark ‘Oceanus Procellarum’ sea in the south-east corner compared to in the north-west corner for a northern observer.”

But why does it look like this? Well, because physically, we’re actually upside down compared to someone standing in the opposite hemisphere.

This great diagram below shows what we mean: 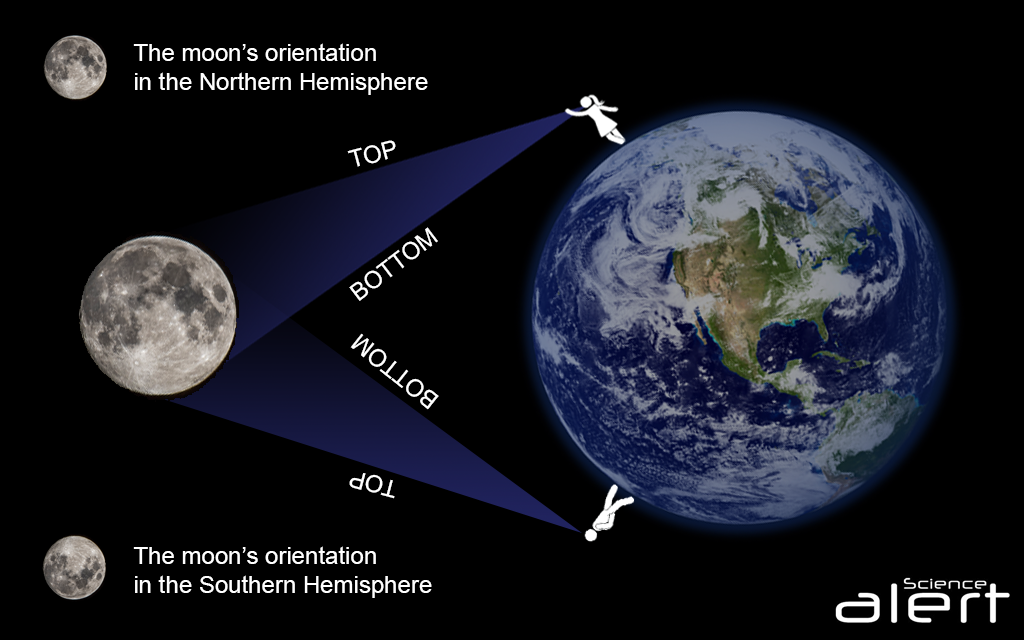 This also extends to the crescent Moon – depending where you are in the world will give you different rotations of the crescent.

“Next time you’re planning a holiday travel to a country near the equator during a crescent moon, when the Moon sets it will look like a smiling face,” Clark explains.

And it’s not just the Moon that’s prone to changing orientation, all of the stars you can see will be either different or upside down too.

“It depends upon where you’re located on Earth but generally the constellations we see in the Southern Hemisphere are rotated again by 180 degrees compared to the Northern Hemisphere,” says Clark.

“In Australia, Orion’s leg and belt is commonly known as ‘The Saucepan’, at it looks like a big old cooking pot!”

So how can you see what the other side of the world sees? Jonti Horner, also at the University of Southern Queensland suggests a great approach: simply get upside down.

“I’m from the UK originally, and while I know the night sky really well, I sometimes find flipping my vision over helps me get my bearings!” he explains.

You can do a handstand if you’re good at that sort of thing, but an easier way is to lie on the ground facing North and lean your head back until you see the ground at the top of your vision.

So what does this all mean for astronomers? Well, for Clark and Horner, not much – they look for exoplanets by measuring tiny changes in the stars colour or light intensity.

“These properties wouldn’t change considerably if at all on where you observe them, since you’re observing these effects tens, hundreds, or sometimes thousands of light years away.”

But if the stars you want to study can’t be seen on your side of the world, it can get a bit tricky.

There’s a good reason why there’s so many telescopes right across the world, and even a few in space.

“We astronomers have world-class telescopes spread all across the globe – from Mount Mauna Kea in Hawaii to Mount Kent in Queensland, trying to unlock the Universe’s greatest mysteries no matter what hemisphere you’re in.”

If all this is blowing your mind a little bit, never forget the water goes down the drain the other way on the other side of the world, too.

Scientists Create Shapeshifting Humanoid Robot That Can Liquefy And Reform
Mysterious White Clouds Keep Popping Up Near The Bahamas, And No One Knows Why
The Latest Milky Way Survey Shows Off an Incredible 3.32 Billion Celestial Objects
Physicists Break Record Firing a Laser Down Their University Corridor
Bacteria Can Use Plastic Waste as a Food Source, Which Isn’t as Good as It Sounds