It came out of nowhere. Just a few short weeks ago – in an alternate reality otherwise identical to our own – it popped up on our screens: a giant asteroid hurtling through space, and headed straight for us.

At least, maybe it is. Nobody really knows. In this hypothetical scenario, the facts on the ground change fast. At first, scientists say there’s only a one-in–50,000 chance this thing will hit us. Within weeks, those odds become one in 100.

There’s good news and bad news about this approaching object, called 2019 PDC. The good news is 2019 PDC doesn’t exist at all. It’s a completely fictional, imaginary apocalypse. The chance of impact, in actuality, is zero.

Because of that, this week NASA, Federal Emergency Management Agency (FEMA) and international partners including the European Space Agency (ESA) are conducting a drill: a ‘tabletop exercise’ to simulate how a planetary asteroid emergency would play out in real time. 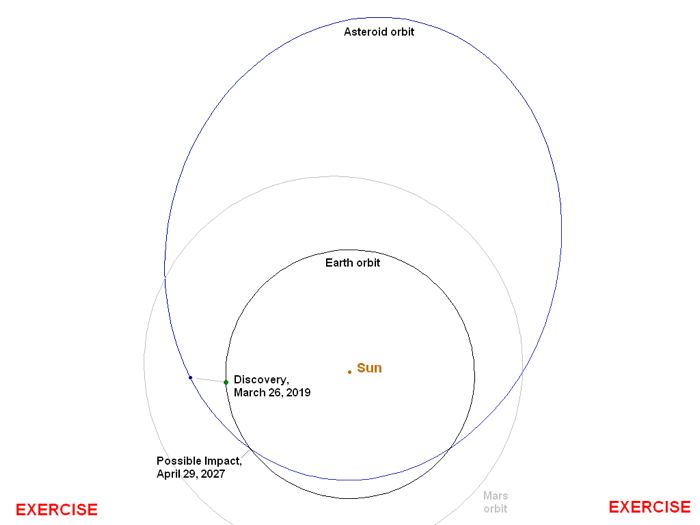 NASA’s been running these simulations for years, and with good reason: Earth, as it happens, is in the midst of an epic asteroid surge compared to the relative peace and quiet the planet experienced many millions of years ago.

When unexpected space rocks do appear on our scopes, sometimes we only get hours’ notice of their existence before they streak past. While the chances of a catastrophic impact are exceedingly slim, we’re nonetheless unprepared for surprise asteroid strikes, which is why NASA is continually working on plans to help improve our NEO detection and mitigation capabilities.

Part of that was the formation in 2016 of a new Planetary Defence Coordination Office (PDCO), which will help run the drill exercise this week, designed by researchers at the NASA Jet Propulsion Laboratory’s Centre for NEO Studies (CNEOS).

“The first step in protecting our planet is knowing what’s out there,” says the ESA’s Head of Planetary Defence, Rüdiger Jehn.

“Only then, with enough warning, can we take the steps needed to prevent an asteroid strike altogether, or to minimise the damage it does on the ground.”

In the 2019 PDC scenario – being run as part of the 2019 Planetary Defence Conference held in Washington, DC from Monday through to Friday – the object is first picked up on 26 March 2019.

Unlike the 150 or so NEOs scientists discover each month, initial calculations suggest 2019 PDC is a ‘Potentially Hazardous Asteroid’, estimated to range up to 300 metres in size and potentially on a collision course with Earth.

Further analysis reveals the most likely date of impact will be 29 April 2027 – eight years to the day from today – and projects an estimated ‘risk corridor’: a red line of danger spanning the globe where the asteroid, if it hits at all, may hit.

That red line neatly traverses the middle of the US, in addition to other land masses including Africa, and the latest information to hand suggests 2019 PDC has about a 1 percent chance of hitting Earth.

The simulation, which begins today, will run until the end of the week, and see participants from NASA, FEMA, the ESA and more all receive daily briefings and updates on the asteroid’s trajectory, as the world’s real space agencies combine forces to confront an unreal but not unimaginable threat.

As part of the exercise, participants will discuss things like asteroid deflection opportunities (if they exist), address funding issues, and consider how to manage the public’s reaction to an armageddon only eight years away, as well as drawing up plans for pre- and post-disaster relief.

For the first time in one of these asteroid emergency drills, you’ll be able to keep track of the hypothetical situation as it evolves, with daily updates at the @esaoperations Twitter channel and the ESA’s Rocket Science blog, plus you can keep tabs on 2019’s PDC orbital trajectory at the CNEOS website.

“This topic has been the theme of many epic films and TV series,” ESA Operations tweeted.

“But what really are the chances of an asteroid impact and what are our options? Bruce Willis unfortunately isn’t on Twitter.”

Eerie Video of Bizarre Sheep Phenomenon Has The World Running in Circles
Octopus Brains Evolved to Share a Surprising Trait in With Our Brains
The Milky Way’s Halo of Stars Isn’t The Neat Sphere Astronomers Expected It to Be
More Strange Cosmic Threads Discovered Outside Our Galaxy, And They’re Huge
The World Is Going to Lose The Leap Second. Here’s Why