Wormholes are a popular feature in science fiction, the means through which spacecraft can achieve faster-than-light (FTL) travel and instantaneously move from one point in spacetime to another.

And while the General Theory of Relativity forbids the existence of “traversable wormholes”, recent research has shown that they are actually possible within the domain of quantum physics.

The only downsides are that they would actually take longer to traverse than normal space and/or likely be microscopic.

In a new study performed by a pair of Ivy League scientists, the existence of physics beyond the Standard Model could mean that there are wormholes out there that are not only large enough to be traversable, but entirely safe for human travelers looking to get from point A to point B.

The study, titled “Humanly traversable wormholes,” was conducted by Juan Maldacena (the Carl P. Feinberg Professor of theoretical physics from the Institute of Advanced Study) and Alexey Milekhin, a graduate of astrophysics student at Princeton University. The pair have written extensively on the subject of wormholes in the past and how they could be a means for traveling safely through space.

The theory regarding wormholes emerged in the early 20th century in response to Einstein’s General Theory of Relativity. The first to postulate their existence was Karl Schwarzschild, a German physicist and astronomer whose solutions to Einstein’s field equation (the Schwarzschild metric) resulted in the first theoretical basis for the existence of black holes.

A consequence of the Schwarzschild metric was what he referred to as “eternal black holes,” which were essentially connections between different points in spacetime. However, these Schwarzschild wormholes (aka. Einstein–Rosen bridges) were not stable as they would collapse too quickly for anything to cross from one end to the other.

As Maldacena and Milekhin explained to Universe Today via email, traversable wormholes require special circumstances in order to exist. This includes the existence of negative energy, which is not permissible in classic physics – but is possible within the realm of quantum physics.

A good example of this, they claim, is the Casimir Effect, where quantum fields produce negative energy while propagating along a closed circle:

“However, this effect is typically small because it is quantum. In our previous paper [“Traversable wormholes in four dimensions“] we realized that this effect can become considerable for black holes with large magnetic charge. The new idea was to use special properties of charged massless fermions (particles like the electron but with zero mass). For a magnetically charged black hole these travel along the magnetic field lines (In a way similar to how the charged particles of the solar wind create the auroras near the polar regions of the Earth).”

The fact that these particles can travel in a circle by entering one spot and emerging where they started in ambient flat space, implies that the “vacuum energy” is modified and can be negative.

The presence of this negative energy can support the existence of a stable wormhole, a bridge between points in spacetime that won’t collapse before something has a chance to traverse it.

Such wormholes are possible based on matter that is part of the Standard Model of particle physics. The only problem is, these wormholes would have to be microscopic in size and would only exist over very small distances.

For human travel, the wormholes would have to be large, which requires that physics beyond the Standard Model be employed.

For Maldacena and Milekhin, this is where the Randall-Sundrum II model (aka. 5-dimensional warped geometry theory) comes into play. Named after theoretical physicists Lisa Randall and Raman Sundrum, this model describes the Universe in terms of five-dimensions and was originally proposed to solve a hierarchy problem in particle physics.

“The Randall-Sundrom II model was based on the realization that this five-dimensional spacetime could also be describing physics at lower energies than the ones we usually explore, but that it would have escaped detection because it couples with our matter only through gravity. In fact, its physics is similar to adding many strongly interacting massless fields to the known physics. And for this reason it can give rise to the required negative energy.”

From the outside, Maldacena and Milekhin concluded that these wormholes would resemble intermediately-sized, charged black holes that would generate similarly-powerful tidal forces that spacecraft would need to be wary of. To do that, they claim, a potential traveler would need a very large boost factor as they pass through the center of the wormhole.

Assuming that can be done, the question remains of whether or not these wormholes could act as a shortcut between two points in spacetime? As noted, previous research by Daniel Jafferis of Harvard University (which also considered the work of Einstein and Nathan Rosen) showed that while possible, stable wormholes would actually take longer to traverse than normal space.

According to Maldacena and Milekhin’s work, however, their wormholes would take almost no time to traverse from the perspective of the traveler. From the perspective of an outsider, the travel time would be much longer, which is consistent with General Relativity – where people traveling close to the speed of light will experience time dilation (i.e. time slows down). As Maldacena and Milekhin put it:

“]F]or astronauts going through the wormhole it would take only 1 second of their time to travel 10,000 light-year distance (approximately 5000 billion miles or 1/10 of Milky Way size). An observer who does not go through the wormhole and stays outside sees them taking more than 10,000 years. And all this with no use of fuel, since the gravity accelerates and decelerates the spaceship.” 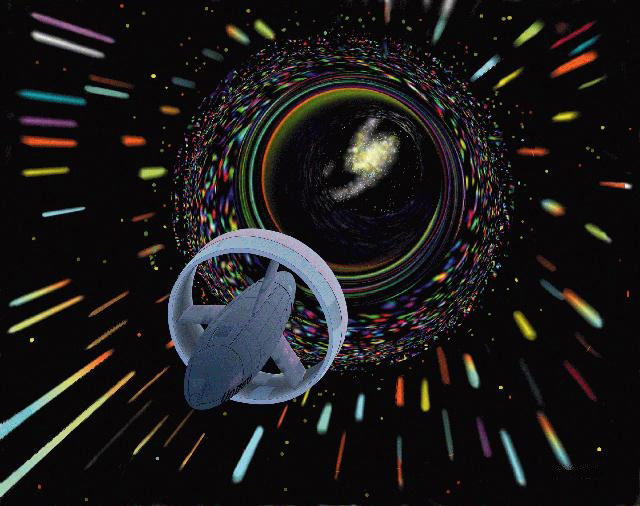 Artist illustration of a spacecraft passing through a wormhole to a distant galaxy. (NASA)

Another bonus is that traversing these wormholes could be done without the use of fuel since the gravitational force of the wormhole itself would accelerate and decelerates the spaceship. In a space exploration scenario, a pilot would need to navigate the tidal forces of the wormhole to position their spacecraft just right, and then let nature do the rest.

A second later, they would emerge on the other side of the galaxy!

While this might sound encouraging to those who think wormholes could be a means of space travel someday, Maldacena and Milekhin’s work presents some significant drawbacks as well.

For starters, they emphasize that traversable wormholes would have to be engineered using negative mass since no plausible mechanism exists for natural formation.

While this is possible (at least in theory), the necessary spacetime configurations would need to be present beforehand. Even so, the mass and size involved are so great that the task would be beyond any practical technology we can foresee. Second, these wormholes would only be safe if space were cold and flat, which is not the case beyond the Randall Sundrum II model.

On top of all that, any object that enters the wormhole would be accelerated and even the presence of pervasive cosmic background radiation would be a significant hazard.

However, Maldacena and Milekhin emphasize that their study was conducted for the purpose of showing that traversable wormholes can exist as a result of the “subtle interplay between general relativity and quantum physics.”

In short, wormholes are not likely to become a practical way to travel through space – at least, not in any way that’s foreseeable. Perhaps they would not be beyond a Kardashev Type II or Type III civilization, but that’s just speculation. Even so, knowing that a major element in science fiction is not beyond the realm of possibility is certainly encouraging!

The Moon will turn red tonight in a stunning ‘flower eclipse’. Here’s how to watch
Ancient Genes Reveal Early Farmers’ Origins As More Complicated Than We Thought
New Kind of ‘Solar’ Cell Shows We Can Generate Electricity Even at Night
Over 1,000 New Asteroids Discovered Hidden in Hubble Archives
There’s an unfortunate causal link between cleaner air and Atlantic hurricanes