Remember when the Solar System was simple? When you learned to say My Very Easy Method Just Sped Up Naming Planets? Astronomers just had to go mess it up, didn’t they.

Now our Solar System is littered with dwarf planets and comets masquerading as asteroids and ridiculous sounding ‘moon moons‘ and we can’t deal. Thankfully the case for returning a ninth planet to the list is looking solid, and we might not need to wait long to see it.

We can blame Caltech astronomer Mike Brown for much of this mess. If you were once a Pluto fan, he’s the man you send your bottled tears to for his role in its demotion from the planetary line-up.

But some of Brown’s recent work might end up weirdly making up for the loss of Pluto. Since 2016, he’s been gathering evidence for a replacement Planet Nine orbiting somewhere further out in the suburbs.

So why are we waiting so long? It’s either there, or it isn’t. Sadly, planet hunting isn’t quite that simple any more. Astronomers could once satisfy their curiosity by tracking pinpricks of light as they slipped across the heavens, like moths circling a campfire.

But what of the bugs out in the darkness, silently creeping around far away from the flames? Locating them requires patience, a bunch of detective work, and a whole lot of statistics.

Suspicions on the hidden planet’s presence were first raised when Brown and his colleagues noticed bunches of objects out in the cold regions of the Kuiper Belt weren’t sitting quite where they should be.

There are a few reasons why this might be the case. Maybe expectations were wrong. Maybe their data on Kuiper Belt Objects (KBOs) had some errors in it. Or maybe … just maybe … there was an unseen mass jiggling their orbits.

The past few years have involved whittling away alternative explanations one by one in the hope Planet Nine will be the last hypothesis standing.

Most recently Brown has worked with fellow Caltech astronomer Konstantin Batygin to come up with a new method for determining the potential for bias in individual measurements of KBOs.

We can breathe a sigh of relief. Based on this newest analysis, there’s a 0.2 percent chance the clusters of tiny ice objects just happened to cluster that way on their own, making more likely something pushed them out of alignment.

“Though this analysis does not say anything directly about whether Planet Nine is there, it does indicate that the hypothesis rests upon a solid foundation,” says Brown.

Working backwards suggests that ‘something’ could definitely qualify as a planet. And then some.

Previously, it had been thought to have a mass about 10 times and a volume four times that of Earth’s, with an orbit that took this hypothetical planet 75 times further out than Pluto.

Scratch all of that. Based on the latest estimates, Planet Nine isn’t that far away, and is a little scrawnier than we thought. (Still a beefcake, though.)

“At five Earth masses, Planet Nine is likely to be very reminiscent of a typical extrasolar super-Earth,” says Batygin.

Thousands of computerised models have done the virtual equivalent of pressing replay on the evolution of the Solar System’s edge, drawing limits on its likely size and orbit. 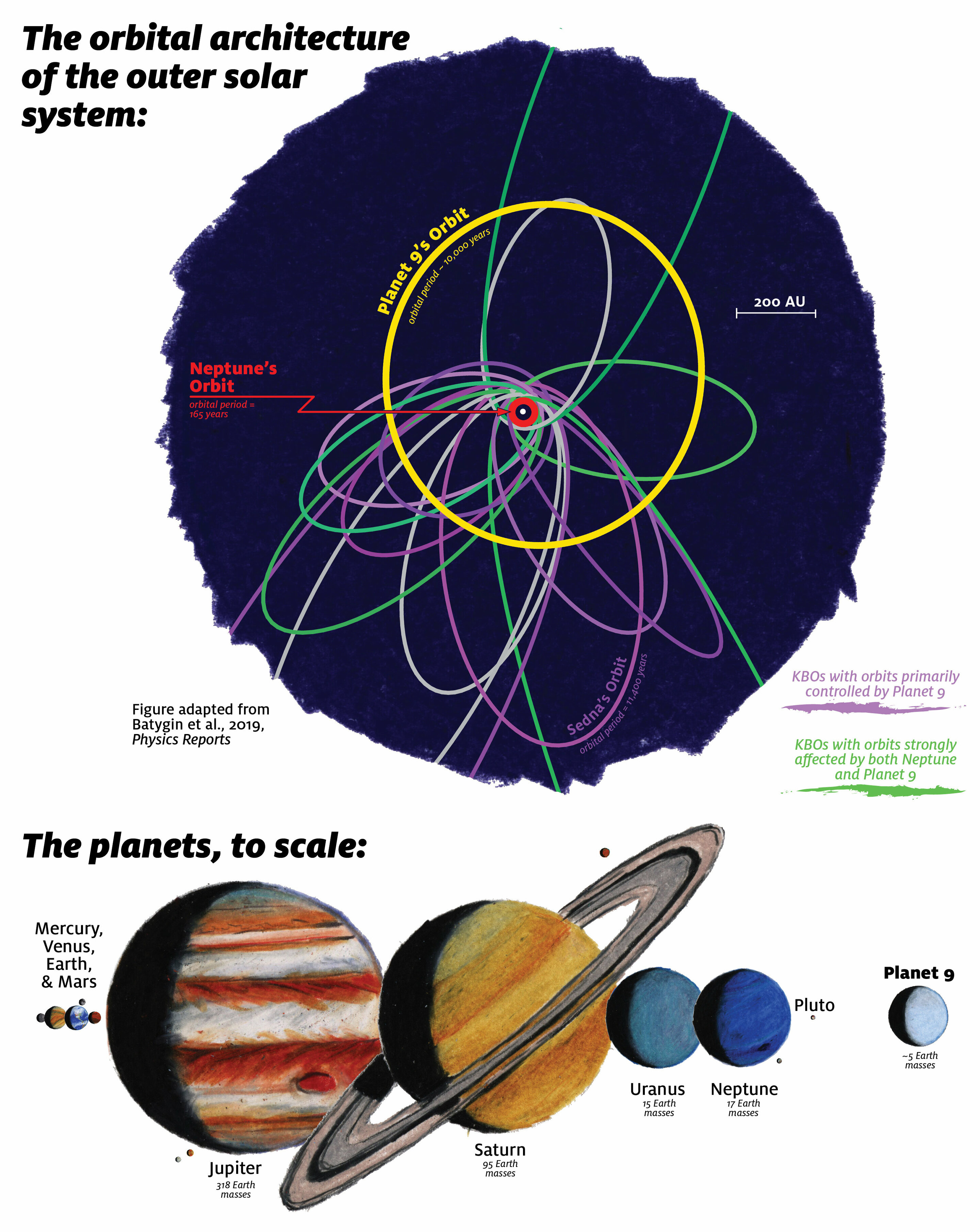 (James Tuttle Keane/Caltech)Not only are we imagining it to be a fat Earth, it now turns out it could well be following an elliptical orbit that sees it venture as far as 400 to 800 astronomical units (AU) from the Sun.

Pluto’s orbit ranges from 30 to 50 AU, so while we’re still talking a long trip out into the solar wilderness, it’s not quite the mind-blowing scale we’d imagined. That said, the farthest object so far confirmed in the Solar System is FarFarOut, at 140 AU.

So, the evidence for a new Planet Nine might be significant, but is still largely circumstantial, until we can peer far enough into the distance to see it.

“My favourite characteristic of the Planet Nine hypothesis is that it is observationally testable,” says Batygin.

“Although finding Planet Nine astronomically is a great challenge, I’m very optimistic that we will image it within the next decade.”

Well, never too early to start looking for a name. How about something that starts with the letter ‘P’?

This research was published in Physics Reports and The Astronomical Journal.

Physicists Break Record Firing a Laser Down Their University Corridor
The True Extent of Global Warming Has Been Hidden, Scientists Warn
This Rembrandt Has Been Hiding a Surprising Secret For Centuries
This Species of Carnivorous Plant Evolved Into a Toilet And Is Now Winning at Life
‘Funky Worm’ Fossil Helps Explain The Mysterious Origins of Amphibians