Since the Juno spacecraft has been in orbit around Jupiter for nearly five years – since 4 July 2016 – you may have forgotten about that time back in 2013 Juno flew past Earth. The spacecraft needed a little extra boost to reach Jupiter, so it used Earth for a gravity assist.

Image editor Kevin Gill reminded us of that flyby with some stunning newly processed images of Earth, taken by the JunoCam, the “citizen science” camera on board. Pale blue dot indeed!

Juno flew past Earth on 9 October 2013, and it received a boost in speed of more than 3.9 kilometers per second (about 8,800 mph). Scientists also used the flyby as a way to test out the camera, giving it its first warmup in space of taking images of a colorful planet.

The flyby gave amateur image editors a warmup in using JunoCam images. Since JunoCam was designed to be a collaborative effort between the mission scientists and the public, JunoCam’s imagery is sent back to Earth and posted to the Mission Juno website, where the general public may download them for subsequent image processing.

The images processed by citizen scientists are then posted on the Juno website. They range from detailed scientific imagery and analyses to beautiful works of space-themed art.

“The idea that you can couple our scientific imaging and understanding of the planet, with artistic representations of not only what the planet means but what exploration means, has been very valuable to the mission – and to the public,” said Paul Steffes from Georgie Tech, one of the Juno science investigators. 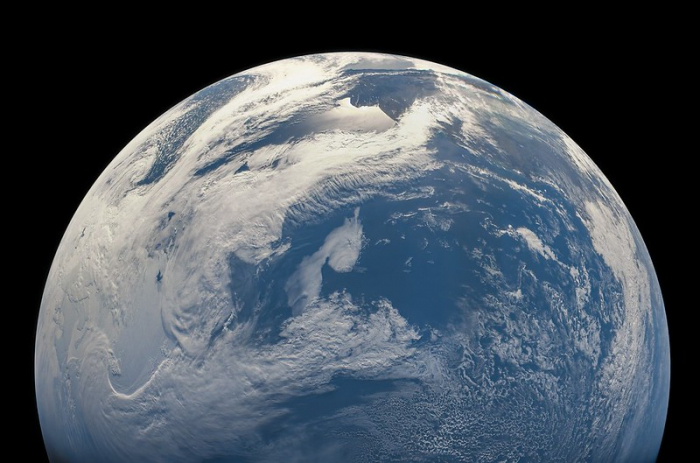 Juno launched from Kennedy Space Center in Florida on 5 August 2011. Juno’s launch vehicle was capable of giving the spacecraft only enough energy to reach the asteroid belt, at which point the Sun’s gravity pulled it back toward the inner solar system.

Mission planners designed the swing by Earth as a gravity assist to increase the spacecraft’s speed relative to the sun, so that it could reach Jupiter.

You can see all the JunoCam citizen science images here, and see more of Kevin’s great work at his Flickr page.

Scientists Have a Plan to Turn Earth Into a Giant Observatory
Are Your Cats Playing or Fighting? Researchers Think They Can Tell The Difference
Newly Discovered Fossil Reveals Hundreds of Teeth ‘Never Seen Before in a Pterosaur’
Shooting Tiny, High Speed Bullets at a Spacecraft Could Speed Up Travel to The Stars
Archaeologists May’ve Discovered The ‘Oldest’ And ‘Most Complete’ Egyptian Mummy Yet