Jupiter: a massive, lifeless gas giant out there on the other side of the asteroid belt. It’s a behemoth, containing 2.5 times as much mass as all the other planets combined. To top it off, it’s named after the Roman king of gods.

Earth: a tiny rocky world, almost too close to the Sun, where life rises and falls, punctuated repeatedly by extinctions. Compared to Jupiter, it’s a gum-drop world: Jupiter is 317.8 times the mass of Earth. And Earth is named after a goddess in German paganism, or so we think.

But no matter the size of the world, the laws of physics are universal, and similarities are everywhere. Photos from NASA’s Juno spacecraft at Jupiter and from Landsat-8 orbiting Earth make that very clear.

Whether on Jupiter or on Earth, the motions of fluids are governed the same. The photo from Jupiter is of the swirling clouds that define that planet. The Earthly photo is of a phytoplankton bloom in the Baltic Sea.

“This is all about fluids moving around on a rotating body,” said Norman Kuring of NASA’s Goddard Space Flight Center. In a press release, Kuring described the similar flow patterns as a combination of laminar (following a smooth path) and turbulent (uneven and chaotic).

“Out of all the complexity flows beauty, whether it be images of Earth, Jupiter, or your coffee cup when you pour in the cream,” Kuring said.

Ever since NASA’s Juno spacecraft arrived at Jupiter, we’ve been enjoying a steady diet of stunning images of the gas giant’s mesmerizing atmosphere, all captured by the JunoCam.

NASA has invited any interested people to use the JunoCam images and process them into works of art. They can then upload them to the JunoCam gallery for people to see. 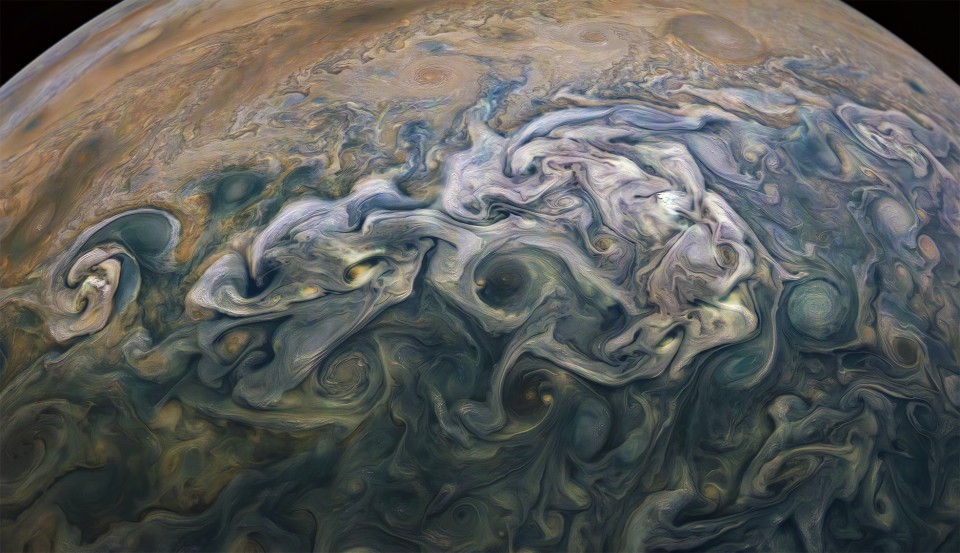 This Juno image was processed by Gerald Eichstädt and Seán Doran. The image was captured in December 2018 and then processed to reveal hard-to-see detail.

The intricate swirls visible in Jupiter’s uppermost cloud layer are likely caused by higher temperatures deeper in the layers of the atmosphere, and by the planet’s rotation.

The image of Earth is of the Baltic Sea near Finland, where a phytoplankton bloom is in full swing. When there are plenty of nutrients, and when temperature and salinity are just right, phytoplankton reproduces rapidly, sometimes changing the appearance of the water. 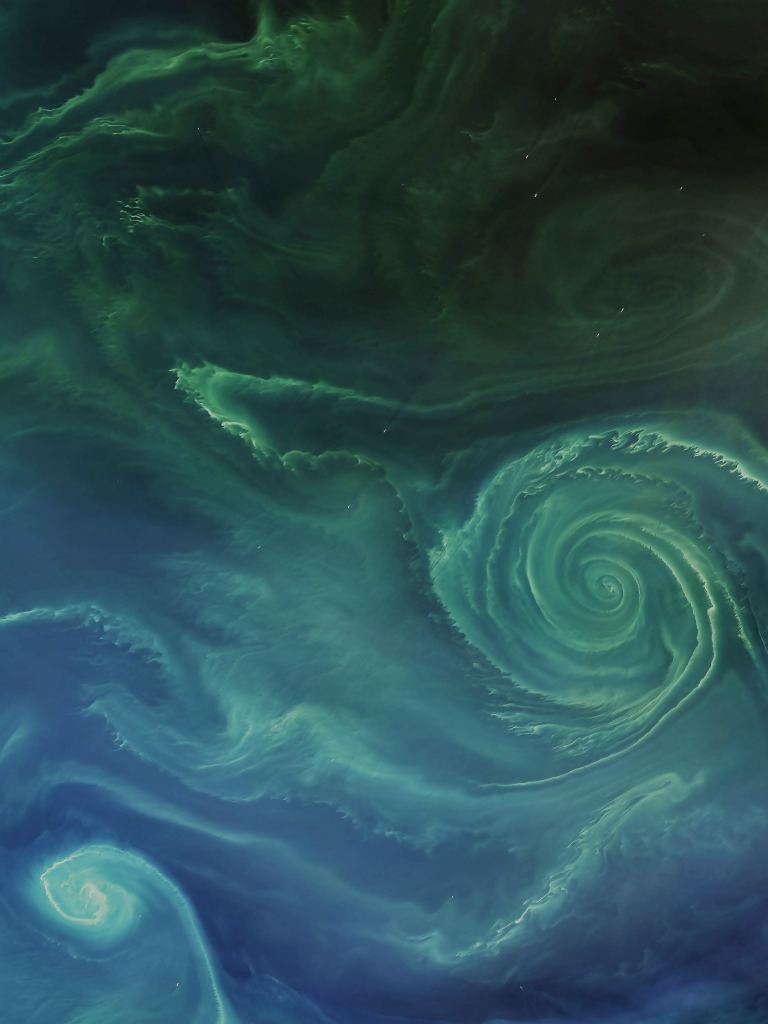 The ocean currents created the swirling flow patterns in the image. The image was captured by the Operational Land Imager on Landsat-8.

Scientists are very interested in how ocean currents move nutrients, carbon, and heat around the oceans, and these phytoplankton blooms are an opportunity to understand it all better. They’re like a window into it all.

It’s the same with Jupiter. The swirling currents at Jupiter tell scientists something about what’s happening deeper inside the gas giant’s atmosphere.

“In interpreting what we see elsewhere in the solar system and universe, we always compare with phenomena that we already know of on Earth,” Kuring said. “We work from the familiar toward the unknown.”

There’s a great collection of work in JunoCam’s gallery. There’s also a gallery of Landsat images to check out.

A Giant Slab of Space Junk Crashed in Australia, But Experts May Have Identified It
An Ancient Creature Who Could See in The Dark Lies Hidden in The Eyes of Whales
Scientists Glimpse The Earliest Dark Matter Ever Observed in the Universe
Scientists create world’s first ‘synthetic embyros’ using stem cells from mice
New study may explain why not all birds are actually bird-brained