The death of a binary star can be a spectacularly violent thing.

This picture shows the binary system R Aquarii, a red giant throwing off its outer envelope, which is being greedily cannibalised by its companion, a much smaller, denser white dwarf.

The dramatic moment you’re looking at unfolded just 650 light-years from Earth – practically right next door in astronomical terms, which is why astronomers have a keen interest in the event.

But this new image of the interaction – taken in near-infrared by the SPHERE planet-hunting instrument on the European Southern Observatory’s Very Large Telescope – gives us an incredibly detailed new glimpse of the action.

For contrast, here is a picture taken by the Hubble Space Telescope of the nebula Cederblad 211 – the dust and gas cloud that the stars are in the process of creating. 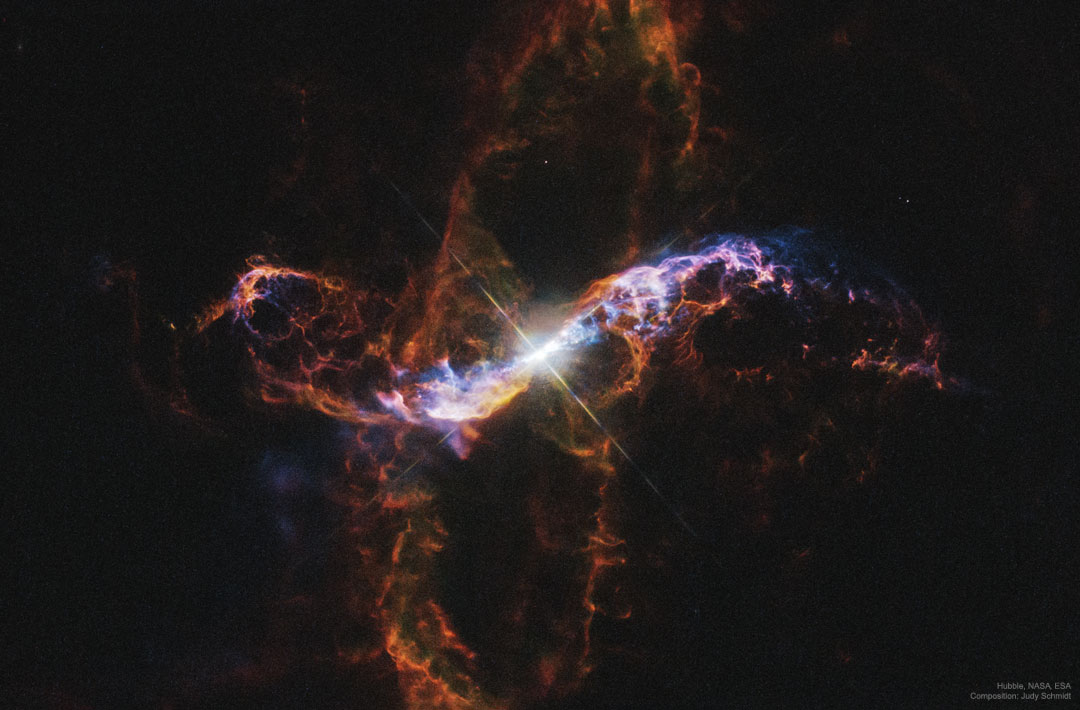 And another image taken by the Wide Field Camera 3’s near-infrared instrument.

What’s happening here is very turbulent. The red giant is what is known as a Mira variable star, a star at the very end of its lifespan. These kind of stars have already lost at least half their material, and as they pulsate, they reach a brightness 1,000 times that of the Sun.

The white dwarf – an end-of-life star that has exhausted its nuclear fuel – is also quite busy. The material it devours from the red giant accumulates on the white dwarf’s surface, occasionally triggering an enormous thermonuclear explosion that blasts the material out into space.

This amazingly clear image shows both the stars at the centre of the jets of material spinning out into space. Eventually, this binary system’s life could end in a colossal explosion – a Type Ia supernova.

You can download full-size and wallpaper-size versions of the photo here, and read the paper on it in the journal Astronomy & Astrophysics.

Shooting Tiny, High Speed Bullets at a Spacecraft Could Speed Up Travel to The Stars
Astronomers Just Realized The Milky Way Is Too Big For Its Surroundings
Sword Mistaken For Replica Is Actually An Ancient 3,000-Year-Old Weapon
Mysterious White Clouds Keep Popping Up Near The Bahamas, And No One Knows Why
‘Funky Worm’ Fossil Helps Explain The Mysterious Origins of Amphibians