Humans have a hard-wired habit of seeing patterns, shapes, and faces in all kinds of objects. For some these phenomena are conspiracy fuel, but it’s really just our brains trying to make sense of the world.

Case in point, the Mars Warrior Women, the Mars Face, or any half decent optical illusion.

This time, however, we’ve gone a little further afield. Move over Earth and Mars, some news sites have reported that NASA’s Juno spacecraft has spotted a dolphin swimming on Jupiter!

Of course, there are no actual dolphins in Jupiter’s -145 degrees Celsius (-229 degrees Fahrenheit) chilly clouds.

But the picture, taken by Juno and highlighted on Twitter by artist Seán Doran is pretty cool, and the shape he pointed out does look surprisingly like a dolphin:

Can you see the cloud dolphin? If not, no worries – we’ve highlighted it for you in all its glory. 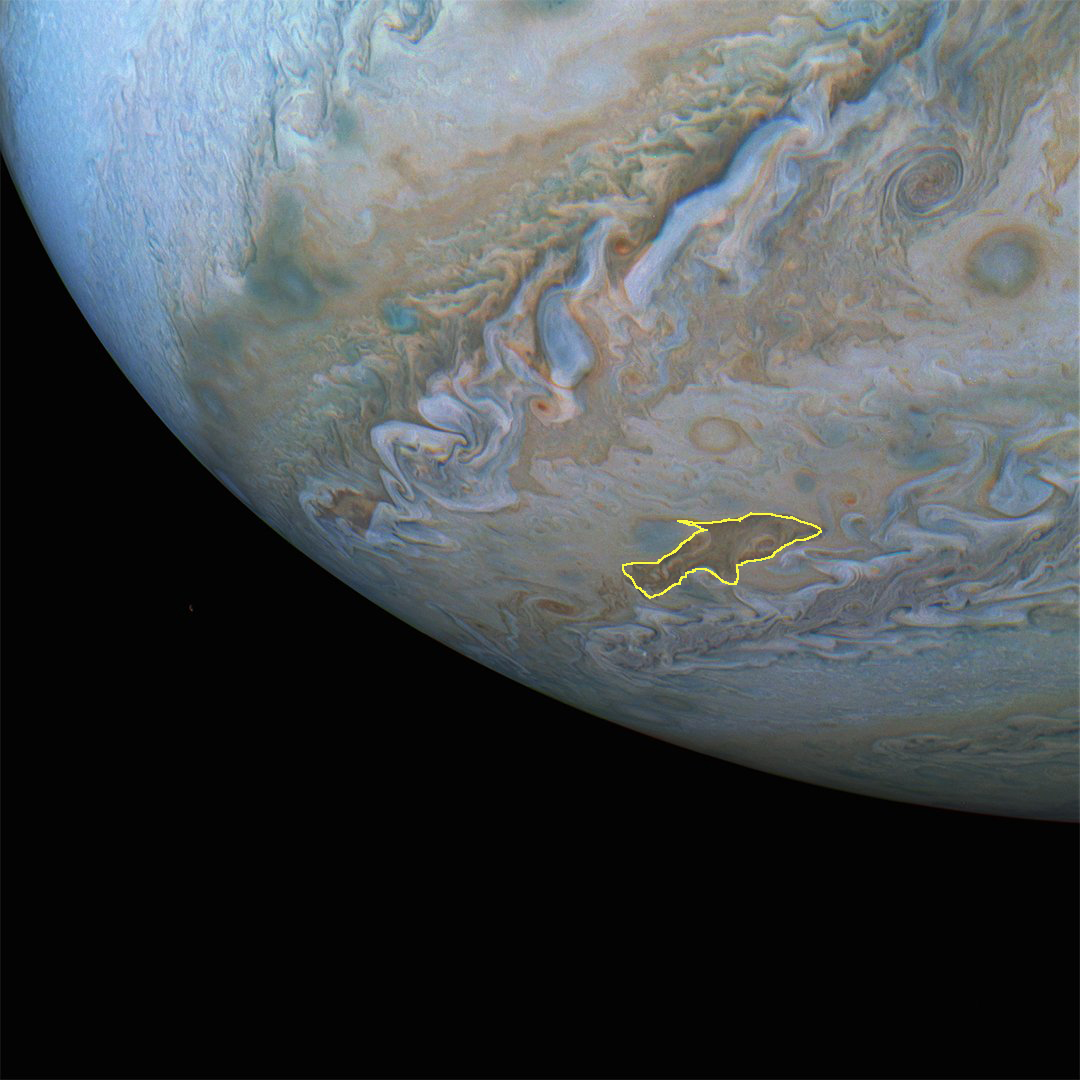 Don’t let its docile demeanour fool you – according to Doran, this cloud beast is probably at least the size of Earth.

Juno has been travelling in Jupiter’s orbit and taking incredible images since mid-2016, and each cache of photos is edited by a team of citizen scientists.

On each flyby, JunoCam can take between 12 and 20 images, and Juno just finished its 16th flyby – so there are lots of breathtaking images to chose from.

And since there’s so many photos, and just one lonely dolphin, here at ScienceAlert we decided to see what other animals we might find on the swirling surface of the gas giant.

So, please enjoy this extremely unofficial list of the animals of Jupiter. 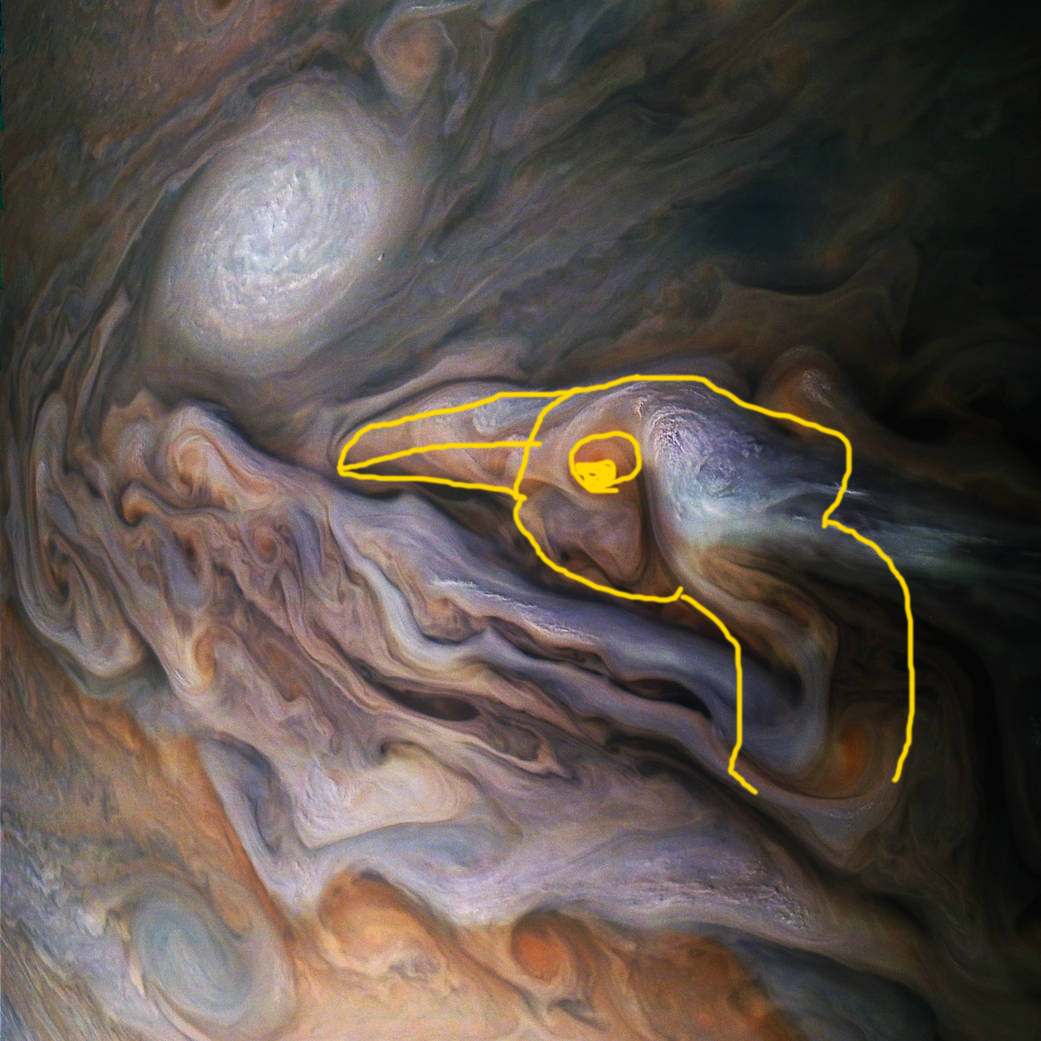 The octopus (or cuttlefish?): 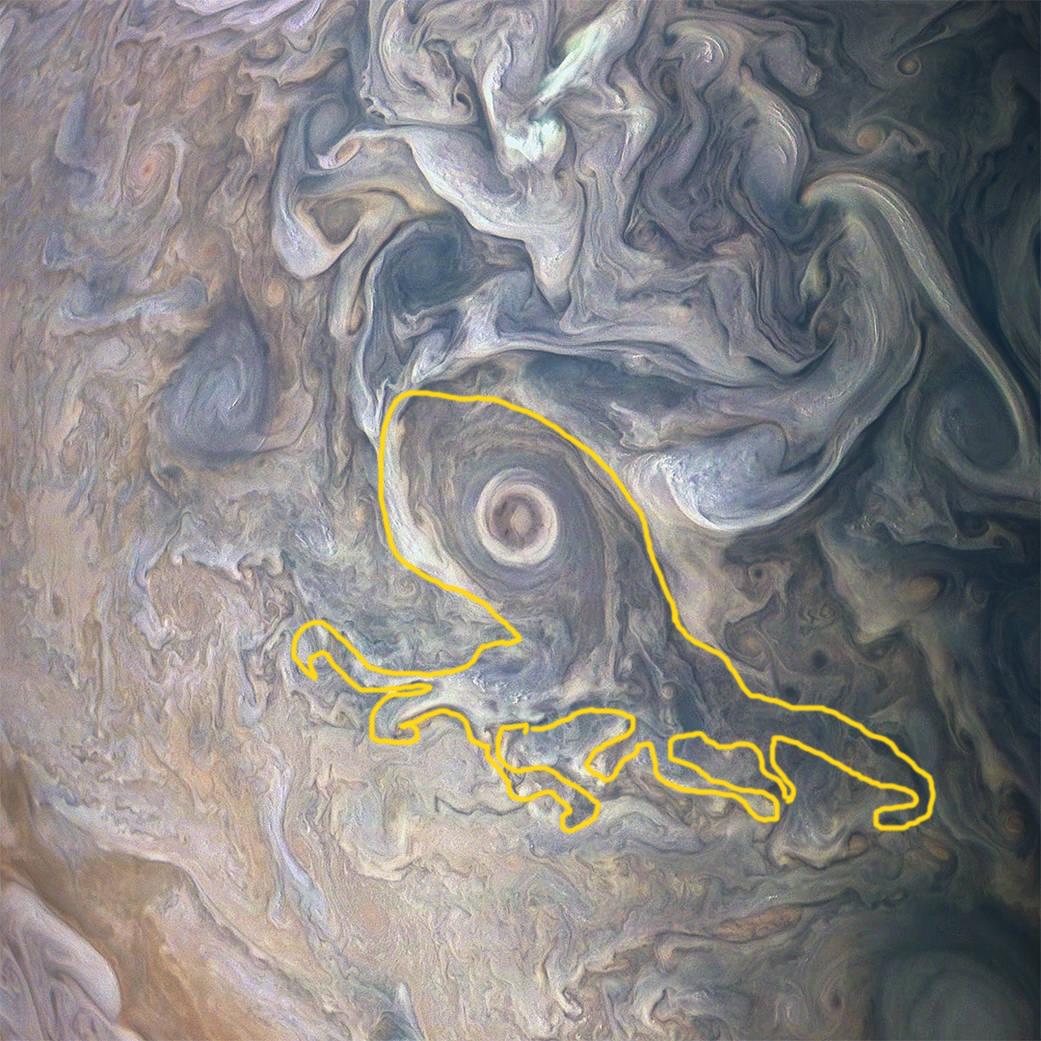 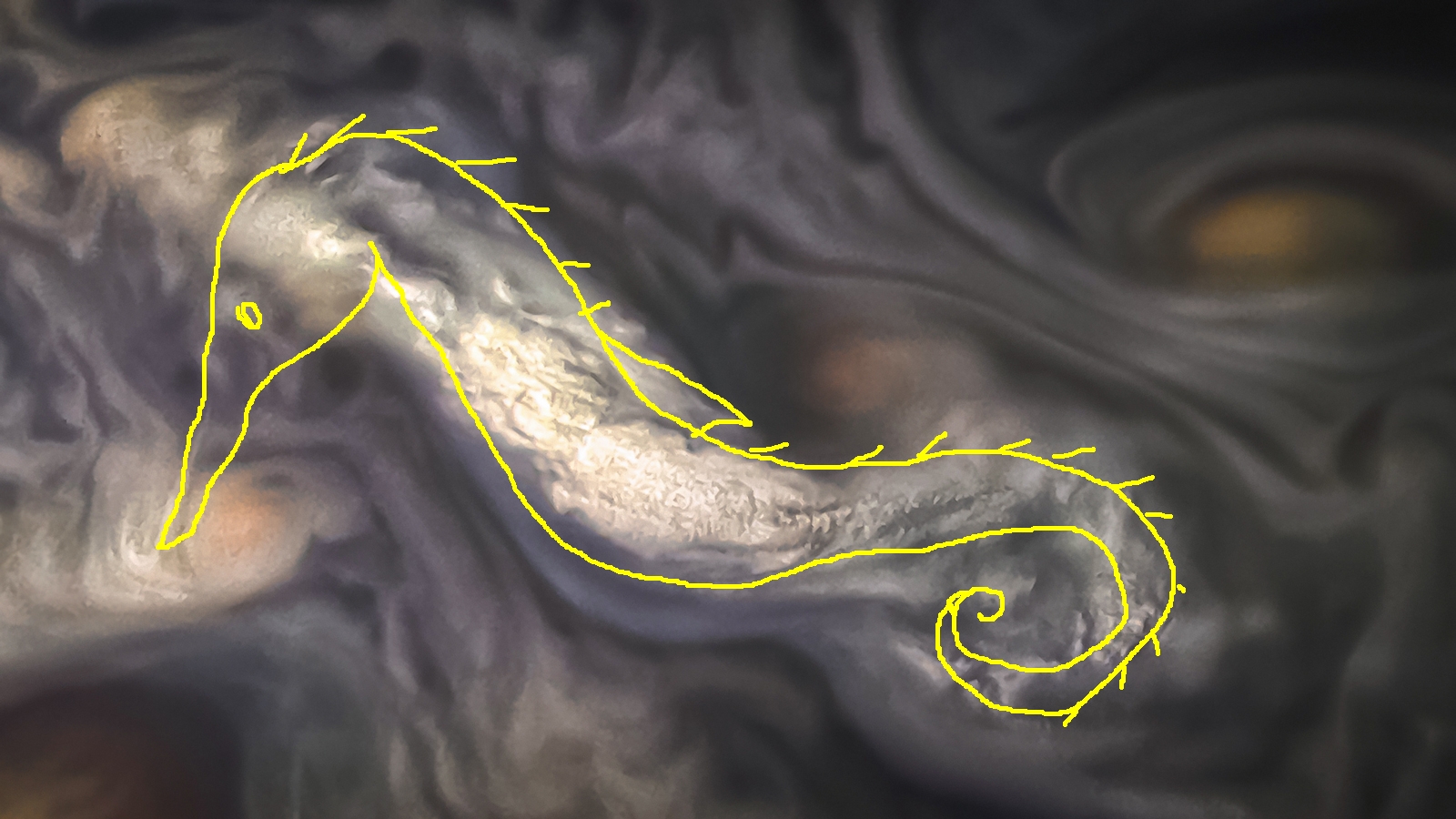 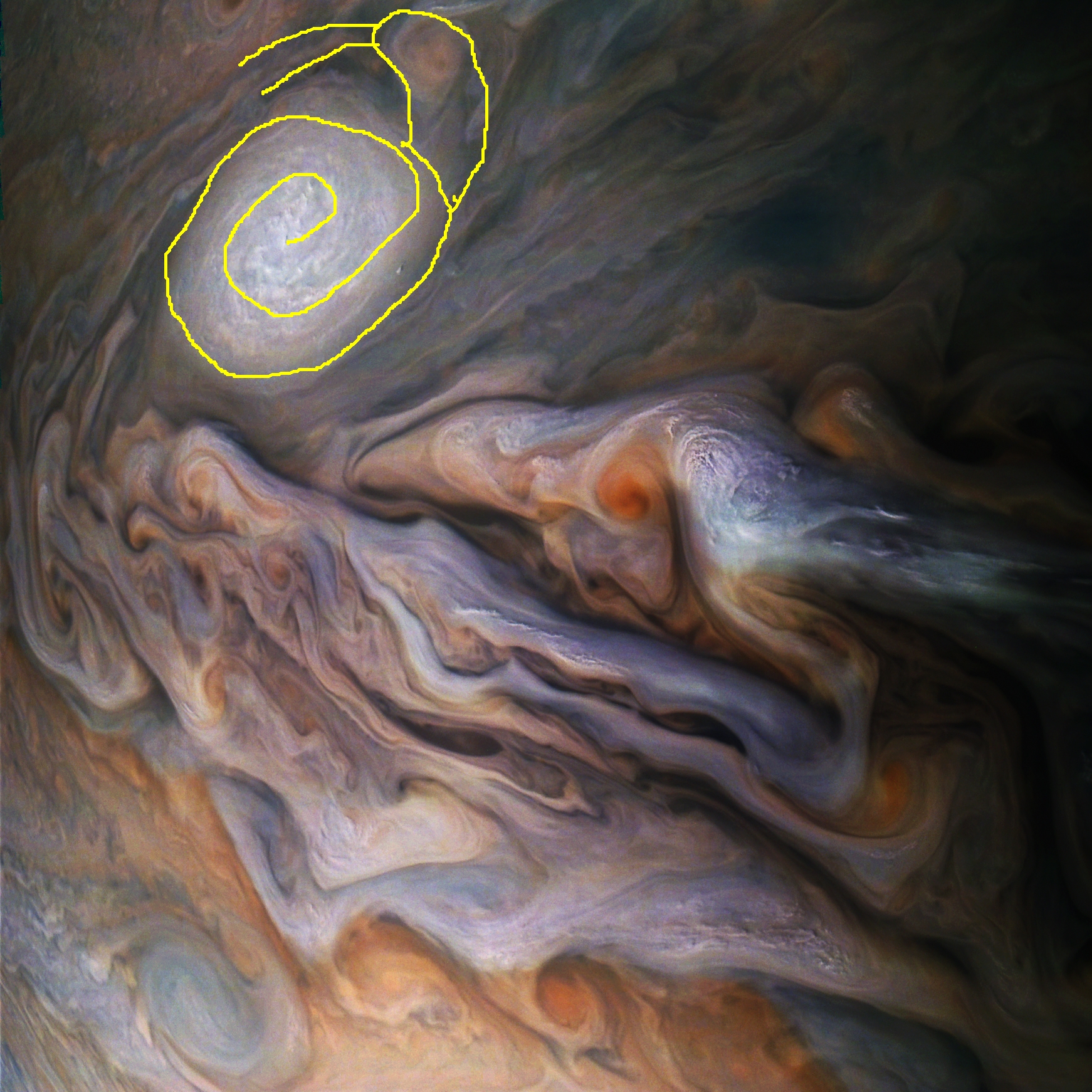 Both the snail and the parrot are from Juno’s most recent flyby on the 29th of October, while the octopus was from the 13th flyby back in May.

The seahorse was taken in mid-July, while the spacecraft performed its 14th flyby of Jupiter. Juno was about 6,200 kilometers (3,900 miles) from the tops of Jupiter’s clouds when it took the seahorse photo above.

Oh, and here’s another dolphin:

Obviously these are all in jest, but it really does go to show that humans love seeing patterns in unusual places.

We’re sure there are plenty more animals left to discover – if you find any, we’d love if you sent us the picture! Maybe we’ll start a Jovian zoo.

You can see more of Juno’s images (minus the animals) here.

Bar Graphs Induce a Hidden Bias in Interpretation, Experiment Shows
Could ‘The Last of Us’ Ever Happen? The Real Risks of a Fungus Pandemic
Newly Discovered Fossil Reveals Hundreds of Teeth ‘Never Seen Before in a Pterosaur’
An Incredible Thing Happens When Dolphins And Humans Team Up
A Billion-Dollar Biotech Company Plans to Bring The Dodo Back to Life