We often think of Venus as our closest Solar System sibling. It’s the most similar to Earth in size, mass and composition. And we thought it was the closest in terms of physical distance – but it looks like that honour could belong to Mercury.

No, the order of the planetary orbits is still the same. Mercury is still the innermost planet, and Venus’s orbit is still closest to Earth’s orbit. But, according to new calculations, Mercury is on average closer to Earth than our erstwhile BFF.

It sounds counterintuitive, doesn’t it? And perhaps that’s what led us to the misconception in the first place.

“By some phenomenon of carelessness, ambiguity, or groupthink, science popularisers have disseminated information based on a flawed assumption about the average distance between planets,” write engineers Tom Stockman, Gabriel Monroe, and Samuel Cordner in a commentary published in Physics Today.

“By using a more accurate method for estimating the average distance between two orbiting bodies, we find that this distance is proportional to the relative radius of the inner orbit.

“In other words, Mercury is closer to Earth, on average, than Venus is because it orbits the Sun more closely.”

The team, whose workplaces span Los Alamos National Observatory, US Army’s Engineer Research Development Center, and NASA, is yet to publish their calculations in a peer-reviewed paper, but the authors note they are looking forward to scrutiny from the scientific community.

The way we usually calculate the distances between the planets, the team notes, is based on their distance from the Sun. Earth, on average, is one astronomical unit (AU) from the Sun. Venus is 0.722 AU. Mercury is 0.387 AU.

The team has devised the “point-circle method” or PCM equation for calculating the average distance between two planets in concentric, coplanar (on the same orbital plane), circular orbits. 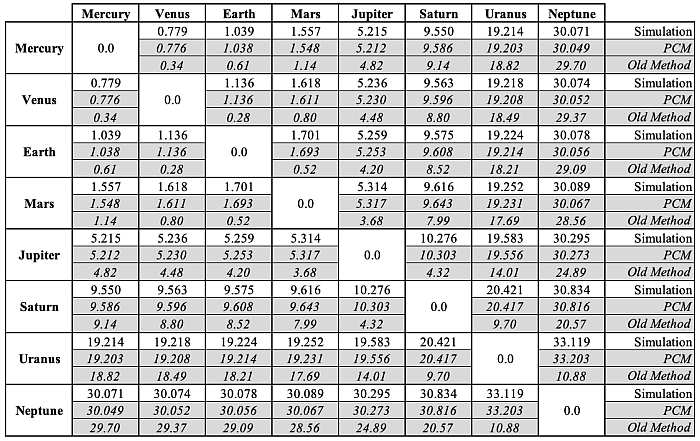 According to their results, it’s not just Earth. Mercury is actually, on average, the closest planet to all the other planets, too. Yes, even Neptune, all the way out in the Solar System’s fringes. And yes, even distant dwarf planet Pluto (although its highly elliptical orbit complicates the maths).

The team has named their discovery the… Whirly Dirly Corollary: “For two bodies with roughly coplanar, concentric, circular orbits, the average distance between the two bodies decreases as the radius of the inner orbit decreases.”

“As best we can tell, no one has come up with a concept like PCM to compare orbits,” the engineers write.

“With the right assumptions, PCM could possibly be used to get a quick estimate of the average distance between any set of orbiting bodies. Perhaps it can be useful for quickly estimating satellite communication relays, for which signal strength falls off with the square of distance.

“In any case, at least we know now that Venus is not our closest neighbour – and that Mercury is everybody’s.”

One can never have too many planet pals, though. We’re all for inducting Mercury into the planetary best friend club, rather than kicking Venus out. We still love all of our neighbours, near and far. Even you, distant dwarf planet Pluto.

A Seismologist Explains The Science of The Devastating Türkiye-Syria Earthquake
A Lost Interview With The ‘Father of The Big Bang’ Was Just Discovered
New Prototype Device Generates Hydrogen From Untreated Seawater
Ancient Jurassic Predator Emerged From Ghost Ancestor, Scientists Say
Wildfire Destruction in The Western US Has Doubled in Just 10 Years