In November 2018, after an epic, 41-year voyage, Voyager 2 finally crossed the boundary that marked the limit of the Sun’s influence and entered interstellar space. But the little probe’s mission isn’t done yet – it’s now sending home information about the space beyond the Solar System.

And it’s revealing something surprising. As Voyager 2 moves farther and farther from the Sun, the density of space is increasing.

It’s not the first time this density increase has been detected. Voyager 1, which entered interstellar space in 2012, detected a similar density gradient at a separate location.

Voyager 2’s new data show that not only was Voyager 1’s detection legit, but that the increase in density may be a large-scale feature of the very local interstellar medium (VLIM).

The Solar System’s edge can be defined by a few different boundaries, but the one crossed by the Voyager probes is known as the heliopause, and it’s defined by the solar wind.

This is a constant supersonic wind of ionised plasma that streams out from the Sun in all directions, and the heliopause is the point at which the outward pressure of that wind is no longer strong enough to push into the wind from interstellar space. 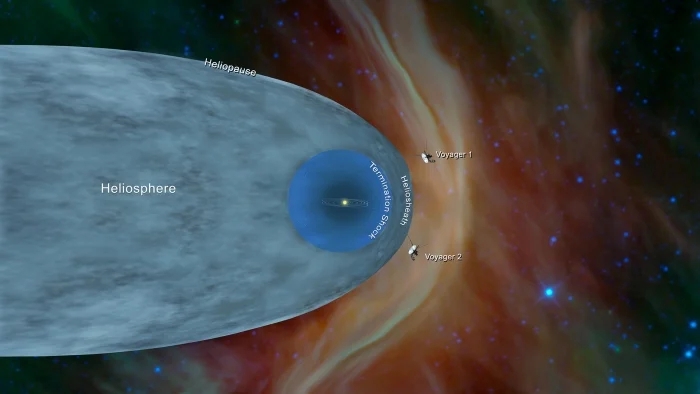 Both Voyagers crossed the heliopause at the nose, but with a difference of 67 degrees in heliographic latitude and 43 degrees difference longitude.

Space is generally thought of as a vacuum, but it isn’t, not completely. The density of matter is extremely low, but it still exists. In the Solar System, the solar wind has an average proton and electron density of 3 to 10 particles per cubic centimetre, but it grows lower the farther out you go from the Sun.

As the Voyager probes crossed beyond the heliopause, their Plasma Wave Science instruments detected the electron density of the plasma through plasma oscillations.

When it first measured the plasma oscillations after crossing the heliopause on 23 October 2013 at a distance of 122.6 astronomical units (18.3 billion km), Voyager 1 detected a plasma density of 0.055 electrons per cubic centimetres.

But detections made by Voyager 2 in June 2019 showed a much sharper increase in density to about 0.12 electrons per cubic centimetre, at a distance of 124.2 astronomical units (18.5 billion units).

Given that plasma at Earth’s atmospheric pressure has an electron density of 10^13 per cubic centimetre, those amounts may seem tiny, but they’re significant enough to warrant our interest – especially since it’s not clear what causes them.

Another theory is that material blown by the interstellar wind should slow as it reaches the heliopause, causing a sort of traffic jam. This has possibly been detected by outer Solar System probe New Horizons, which in 2018 picked up the faint ultraviolet glow resulting from a buildup of neutral hydrogen at the heliopause.

It’s also possible that both explanations play a role. Future measurements taken by both Voyager probes as they continue their journey out into interstellar space could help figure it out. But that might be a long bet to take.

“It is not certain,” the researchers wrote in their paper, “whether the Voyagers will be able to operate far enough to distinguish between these two classes of models.”

We believe in you, space probes!

The research was published in The Astrophysical Journal Letters.

Tiny Radioactive Object Goes Missing in Australia, Sparks Urgent Search
An Iceberg The Size of London Has Broken Free From Antarctica Ice Shelf
Physicists Used Sound Waves to Give a Tiny Sun Its Own Kind of Gravity
Archaeologists May’ve Discovered The ‘Oldest’ And ‘Most Complete’ Egyptian Mummy Yet
Dogs Can Be Aggressive For Lots of Reasons, And One of Them Is You