In 2018, a camera on board the Mars Express mission caught sight of a strangely long and wispy cloud, billowing across the surface of the red planet.

From a distance, the 1,500-kilometer (930-mile) trail of fog almost resembled a plume of smoke, and it seemed to be emerging from the top of a long-dead volcano.

Looking back at archived images, researchers soon realized this had been happening for a while. Every few years in spring or summer, this curious cloud would return, before disappearing once again. The fleeting plume was caught on camera in 2009, 2012, 2015, 2018, and again in 2020.

A newly published study has now detailed the reasons behind why this unfathomably long cloud keeps coming and going on Mars. To do this, researchers compared high-resolution observations of the 2018 plume to other archived observations, some of which stretch back all the way to the 1970s.

Here’s the cloud’s story. Each year, around the start of spring or summer in the southern Martian hemisphere, the Arsia Mons Elongated Cloud begins to take shape.

At dawn, dense air from the base of the Arsia Mons volcano begins to climb up the western slope. As temperatures drop, this wind expands and the moisture within it condenses around particles of dust, creating what here on Earth we call an orographic cloud.

Each morning, over the course of several months of observations, researchers watched this process repeat itself. At about 45 kilometers altitude, the air begins to expand, and for the following 2.5 hours or so, the cloud is pulled westward on the wind, as fast as 600 kilometers per hour (380 mph), before finally detaching from the volcano.

At its largest, the plume can reach 1,800 kilometers in length (more than 1,100 miles) and 150 kilometers in width (nearly 100 miles). By noon, when the Sun is at its apex, the cloud will have completely evaporated.

Ice clouds are not exactly unusual on Mars, but the clouds above Arsia Mons continue to form in summer when most others disappear. In fact, much of the time, this specific volcano has a cloud sitting on top of it when others around it don’t – but only under some conditions does it spread out in a long streak. (Each year, at the start of winter, this cloud can also form a spiral.) 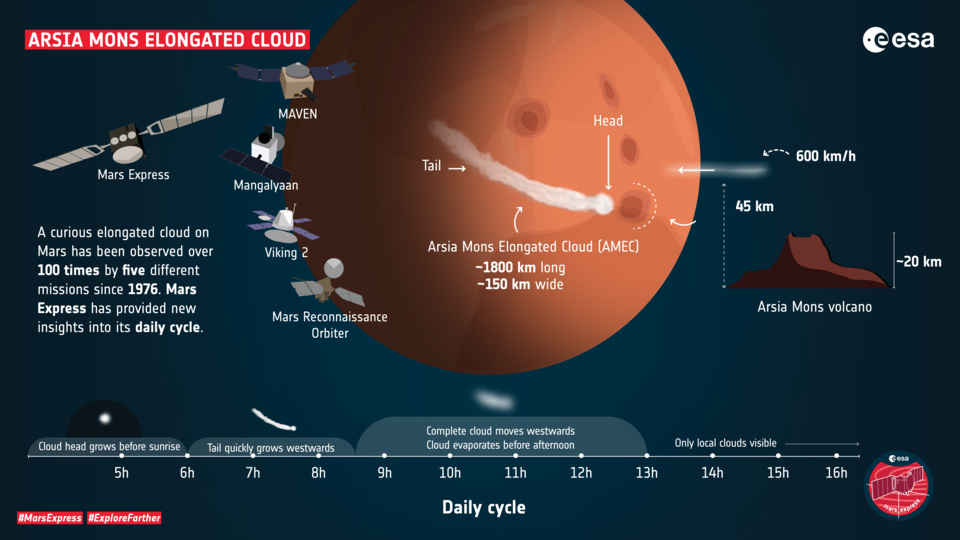 So if this long plume is happening daily for a stretch of time each year, why do we only have sporadic observations of it?

Researchers say it’s because many of the cameras orbiting Mars are only occasionally flying over this region in the morning, and observations are usually planned, which means we are often taking shots of this cloud simply by chance.

Luckily, an old camera still on board the Mars Express mission – the Visual Monitoring Camera (VMC) which has the power of a 2003 webcam – has one perk newer technology doesn’t.

“Although [the camera] has a low spatial resolution, it has a wide field of view – essential to see the big picture at different local times of day – and is wonderful for tracking a feature’s evolution over both a long period of time and in small time step,” explains astronomer Jorge Hernández Bernal from the University of the Basque Country in Bilbao, Spain.

“As a result, we could study the whole cloud across numerous life cycles.”

The study represents the first detailed exploration of the Arsia Mons cloud, and while scientists say it holds similar properties to orographic clouds on Earth, its size is enormous and its dynamics quite vivid in comparison to what we see on our own planet.

“Understanding this cloud gives us the exciting opportunity to try to replicate the cloud’s formation with models – models that will improve our knowledge of climatic systems on both Mars and Earth,” says astronomer Agustin Sánchez-Lavega, also from the University of the Basque Country.

Now that we know when the cloud occurs, it also allows us to direct other, stronger cameras in orbit to the right place at the right time, providing us with a closer glimpse. It may not be too long until the next pics.

The study was published in the Journal of Geophysical Research.

Incredible ‘Fairy’ Robot Sails on The Breeze Like a Floating Dandelion
Ancient Goo Spills The Secrets of How The Egyptians Mummified Their Dead
New Prototype Device Generates Hydrogen From Untreated Seawater
US Shoots Down Chinese Surveillance Balloon: What Can They Actually See?
Super-Rare Star System Is a Giant Cosmic Accident Waiting to Happen