Telescopes from across the globe have teamed up to take unprecedented images of supermassive black hole M87* as it blasts matter into space at 99 percent the speed of light.

This is the same famous black hole that was captured by the Event Horizon Telescope and unveiled in 2019.

That first release was a spectacular achievement. It took many years of work, and an array of radio telescopes that spanned the entire globe, combining their observations to image a region of space not much bigger than the Solar System from 55 million light-years away.

Now a team of scientists has added data from more telescopes across multiple wavelengths of light, each of which reveals different characteristics of the black hole M87* and the relativistic plasma jet it’s blasting into space.

“We knew that the first direct image of a black hole would be groundbreaking,” said astronomer Kazuhiro Hada of the National Astronomical Observatory of Japan.

“But to get the most out of this remarkable image, we need to know everything we can about the black hole’s behavior at that time by observing over the entire electromagnetic spectrum.”

There’s a lot more to a black hole than what we see in the zoomed-in image we see of M87*’s shadow and halo above. The supermassive black hole is active, slurping down material from the hot disc of dust and gas around it, which means some pretty complex things can happen.

One of these is the ejection of relativistic jets being launched from the black hole’s poles.

Nothing that we can currently detect can escape a black hole once it’s passed the critical proximity threshold, but not all the material in the accretion disk swirling into an active black hole inevitably ends up beyond the event horizon. A small fraction of it somehow gets funneled from the inner region of the accretion disk to the poles, where it is blasted into space in the form of jets of ionized plasma, at speeds a significant percentage of the speed of light.

Astronomers think that the black hole’s magnetic field plays a role in this process. The magnetic field lines, according to this theory, act as a synchrotron that accelerates material before launching it at tremendous speed.

In the case of M87*, that’s 99 percent of the speed of light – about as fast as relativistic jets can get – and the jet we can see extends about 5,000 light-years into space. The light it emits spans the entire electromagnetic spectrum, from the least to the most energetic, so observing it in only one wavelength band would mean missing some information about the energy of the structure.

So, the team added data from telescopes observing the jets in multiple wavelengths, including the Hubble Space Telescope for optical light; the Chandra X-ray Observatory and the Swift-X-Ray Telescope; the NuSTAR space telescope for high-energy X-rays; the Neil Gehrels Swift Observatory for ultraviolet and optical; and HESS, MAGIC, VERITAS and the Fermi-Large Area Telescope for gamma radiation. 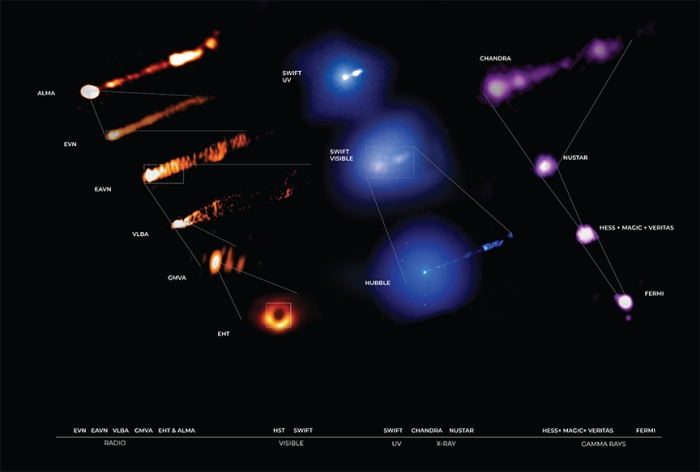 The primary purpose of this, the researchers said, is to produce and release a legacy data set that astronomers will be able to use for years to come to study M87* and its jet, to try to gain further insight into this phenomenon and how it occurs.

“Understanding the particle acceleration is really central to our understanding of both the EHT image as well as the jets, in all their ‘colors’,” said astrophysicist Sera Markoff of the University of Amsterdam in the Netherlands.

“These jets manage to transport energy released by the black hole out to scales larger than the host galaxy, like a huge power cord. Our results will help us calculate the amount of power carried, and the effect the black hole’s jets have on its environment.”

The team’s first analysis of their data is interesting. It shows that, at the time of the Event Horizon Telescope observations in April 2017, the region around it was at the dimmest we’ve ever seen it. Contrary to making the black hole’s shadow harder to image, this actually made things easier, since it meant that M87* was the brightest thing in its immediate environment, unobscured by glare.

They also found that gamma radiation – which can be produced by interaction with cosmic rays, whose origin is currently unknown – wasn’t emerging from close to the black hole’s event horizon at the time of those observations, but somewhere farther out.

Precisely where is still a bit of a puzzle, but that’s the beauty of this work – it’s something that scientists will be building on for a long time, particularly as the Event Horizon Telescope continues to operate. It’s conducting an observing run right now, at time of writing, and that data will give scientists a lot to mull over.

“With the release of these data, combined with the resumption of observing and an improved EHT, we know many exciting new results are on the horizon,” astrophysicist Mislav Baloković of Yale University said.

The results have been published in The Astrophysical Journal Letters.

It’s Possible Neanderthals Evolved So They Wouldn’t Smell Their Own Stink, Study Finds
Stunning Green Comet Will Be Closest to Earth Today, at Peak Brightness
A Mysterious Whirlpool Appeared Over Hawaii, And It Could Be Because of SpaceX
Super-Rare Star System Is a Giant Cosmic Accident Waiting to Happen
Orcas Are Contaminated With a Forever Chemical Associated With an Unlikely Product