Ultra-diffuse galaxies (UDGs) are something of a mystery for astronomers.

They’re smaller galaxies in terms of the number of stars, but they’re still spread out over great distances, making them faint and difficult to spot. It’s not clear how they’re formed or if there’s something special about the dark matter halos that helps them form.

Recently published research might be able to answer a few outstanding questions about UDGs and, in particular, “quenched” UDGs – ones that aren’t forming any new stars. Through a series of simulations, astronomers have been able to spot and analyze some new galaxies that match this description.

Observations and modeling revealed these quenched UDGs were born in what’s known as a backsplash orbit, far beyond the edges of a host galaxy but still loosely connected. In other words, they were part of a bigger system before becoming isolated and share some characteristics with that original system.

“What we have detected is at odds with theories of galaxy formation since quenched dwarfs are required to be in clusters or group environments in order to get their gas removed and stop forming stars,” says astronomer Laura Sales from the University of California, Riverside.

“But the quenched UDGs we detected are isolated. We were able to identify a few of these quenched UDGs in the field and trace their evolution backward in time to show they originated in backsplash orbits.”

The simulation used by the team, called TNG50, was able to successfully predict UDG systems similar to those that have been observed. It could also act as a time machine, rolling back these galaxies to see where they came from billions of years ago.

TNG50 also suggested that the percentage of quenched UDGs in an ultra-diffuse population of galaxies could be as much as 25 percent, much higher than was thought based on field observations. That might mean that there are a lot of these galaxies out there yet to be detected by our telescopes.

A variety of internal processes and external forces have previously been explored as possible reasons for UDGs coming into existence, but so far, there hasn’t been a one-size-fits-all explanation that explains all of these galaxies. 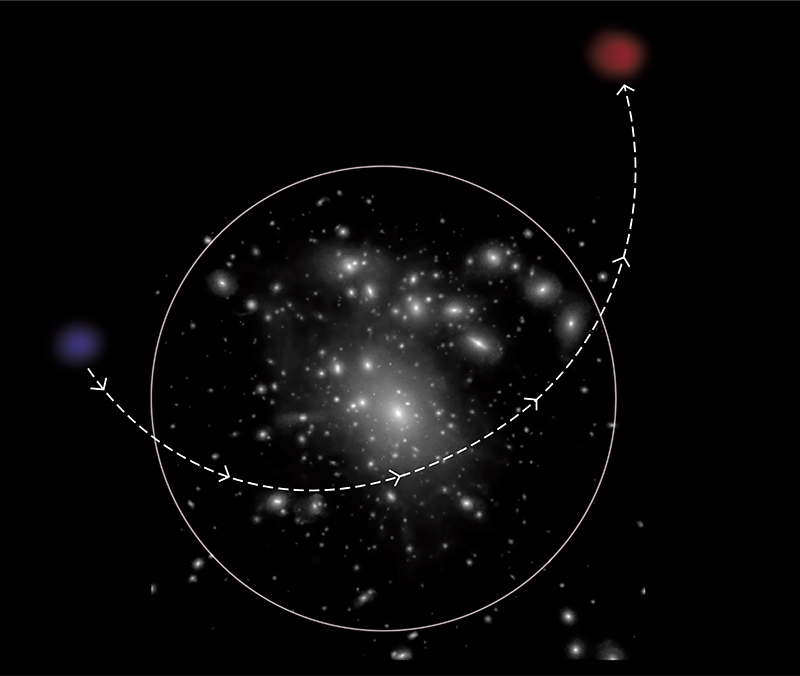 “One of the popular theories to explain this was that UDGs are failed Milky Ways, meaning they were destined to be galaxies like our own Milky Way but somehow failed to form stars,” says astronomer José Benavides, from the Institute of Theoretical and Experimental Astronomy in Argentina.

“We now know that this scenario cannot explain all UDGs. So theoretical models are arising where more than one formation mechanism may be able to form these ultra-diffuse objects.”

UDGs are like dwarf galaxies in terms of how many stars they hold – just a fraction of the 200-400 billion in the Milky Way – and yet they’re of comparable size to the Milky Way. The stars are spread much more thinly.

The dark matter halos of UDGs break the normal rules. Where once they might have had the same concentration of dark matter as a garden variety dwarf galaxy, at some point it shrank and spread out to cover a much larger area, possibly stripped and scarred by interactions with its host.

Getting a better look at the dark matter characteristics might help nail down the cause of these changes. That’s the next target for the researchers: They’re going to use the Keck Telescope in Hawaii to analyze the dark matter content of UDGs in the Virgo cluster, the galaxy cluster closest to us.

As more powerful telescopes come online, we should be able to answer more questions about these UDGs. The improved optics of telescopes like the Vera C. Rubin Observatory and the Nancy Grace Roman Space Telescope will mean more of these faint galaxies can be detected with the help of simulations such as TNG50.

“We hope our results will inspire new strategies for surveying the low-luminosity universe, which would allow for a complete census of this population of dwarf galaxies,” says Sales.

Diamond From 660 Kilometers Below Earth’s Surface Reveals a Water-Rich Environment
A NASA Spacecraft Will Collide With an Asteroid on Monday. Watch Live Here
Mexico’s Earthquake Last Week Created a ‘Desert Tsunami’ in a Distant Cave​​
Engineers Gave a Car a Pair of Eyes to Make Future Roads Safer For Pedestrians
Secret Clues in Tutankhamun’s Tomb Reignite The Idea That Nefertiti Is Hidden Nearby