Who has an even bigger grin than ten years ago? This goofy-looking crater on Mars.

These two images were taken by the HiRISE camera (High Resolution Imaging Science Experiment) on board the Mars Reconnaissance Orbiter and show how Mars’ surface is changing over time – in this case, due to thermal erosion.

The first of these images was taken in 2011 and the other in December of 2020, at roughly the same season, and show a few different changes. There are color variations that are due to different amounts of bright frost over darker red ground, according to the HiRISE team.

You’ll also see some of the “blobby” features have changed shape due to the heat of the Sun causing sublimation – when a solid turns directly into a gas, bypassing the liquid phase.

This thermal erosion has made the “mouth” of the face larger, and the “nose” – which consisted of two circular depressions in 2011– has now grown larger and merged. 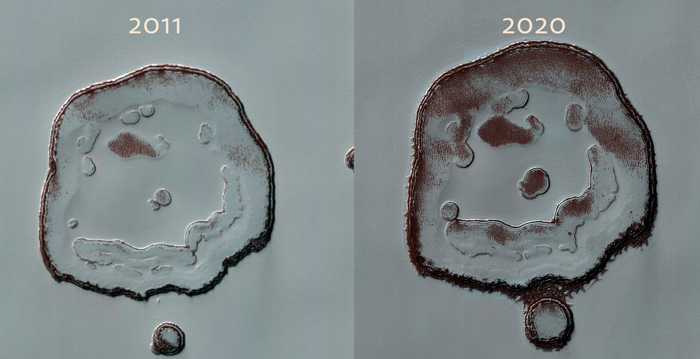 MRO is one of NASA’s oldest and longest-lasting spacecraft. The mission launched in 2005, arrived at Mars in 2006 and has been monitoring Mars ever since. HiRISE is the most powerful camera ever sent to another planet, and it has provided a plethora of incredibly detailed images of Mars’s features.

Some of our favorites over the years have been avalanches in progress, dark flows that may or may not be briny material seeping to the surface, images of our own spacecraft and rovers on Mars’ surface, and many more.

But one major benefits of long-lasting spacecraft is being able to monitor changes in what is being observed. The HiRISE team has been documenting this “smiley face” feature for over a decade, which means we now have good side-by-side comparisons of surface changes, right before our eyes.

New Prototype Device Generates Hydrogen From Untreated Seawater
NASA Rover Encounters Spectacular Metal Meteorite on Mars
Scientists Discover a Weird New Form of Ice That May Change How We Think About Water
Astronomers Studied More Than 5,000 Black Holes to Figure Out Why They Twinkle
A Hidden Food Web Exists in The Desert, And It Thrives on Death