The Landsat project, a joint venture between NASA and the US Geological Survey, is the longest continuous space-based record of Earth in existence. A total of eight Landsat satellites have been launched into space since 1972, with a ninth set to launch in September.

In that time, the satellites have captured more than 9 million images of the planet’s surface, which have been used in more than 18,000 scientific papers, according to NASA’s Earth Observatory.

To celebrate the upcoming 50th anniversary of the Landsat project, the Earth Observatory is running a public competition to choose the best Landsat pictures of all time.

People can pick their favorites from 32 final images – so that’s exactly what we’ve done. 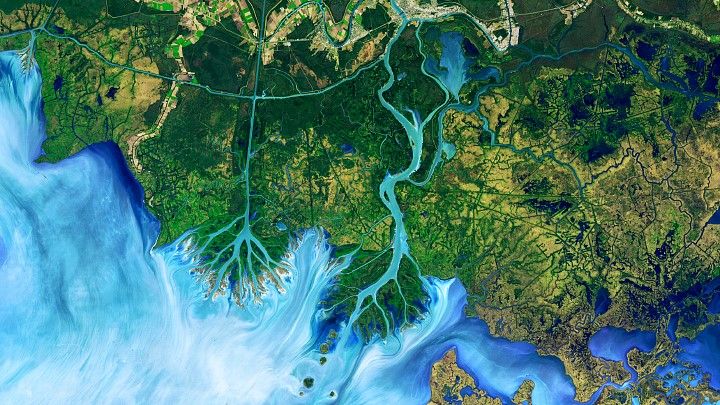 This striking image of the Atchafalaya Delta in Louisiana was taken by Landsat 8 on 1 December, 2016.

It is a false-color image, meaning that the colors have been altered, which “emphasizes the difference between land and water, while allowing viewers to observe waterborne sediment,” according to the Earth Observatory.

It is one of 10,000 Landsat images of the region taken between 1982 and 2016, which were used in a study published in Geophysical Research Letters that looked at the role wind plays in pond expansion on the Mississippi River Delta Plain.

Where the dunes end

This image, captured by Landsat 8 on 13 November 2019, shows the striking color contrast between the Namib Sand Sea, the world’s only coastal desert, covering more than 10,000 square miles (26,000 square kilometers), and the rocky mountains of the Namib-Naukluft Park, both in Namibia.

The sand appears a reddish-orange color due to the presence of iron oxide. The Kuiseb River, which is prone to flooding, stops the sand from spilling over into the mountains, according to the Earth Observatory.

This image of the Yukon-Kuskokwim Delta, where the Yukon River spills into the Bering Sea in Alaska, was taken on 19 May 2021, by Landsat 8. The colors on land have been enhanced in this photo: Green highlights the area of live vegetation; yellow is bare ground; and light brown is dead vegetation.

“The Yukon Delta is an exceptionally vivid landscape, whether viewed from the ground, from the air or from low-Earth orbit,” Gerald Frost, a scientist at ABR, Inc – Environmental Research and Services in Alaska, told the Earth Observatory.

From Russia with questions

Landsat 8 captured this photo of bizarre ripples in the hills surrounding the Markha River in northern Russia on 29 October 2020. The alternating light and dark stripes are visible throughout the year but are more pronounced in winter.

Scientists aren’t exactly sure why the pattern exists. It could have emerged because of the constant freezing and melting of permafrost or due to some kind of unique erosion from rainfall or snowmelt, but NASA remains unsure, Live Science previously reported.

On 25 September 2017, Landsat 8 captured this image of blue, purple and yellow structures covering large areas of farmland in Heilongjiang province in northeastern China.

The structures are plastic shade covers used to grow ginseng – a slow-growing root plant that looks very similar to ginger but can’t  survive in direct sunlight. In many Asian countries, ginseng is believed to have a wide range of medicinal properties, and farming the plant has become a multi-billion dollar business, according to the Earth Observatory.

This impressive image combines a satellite image of folded mountains – warped mountains formed at the boundary between two tectonic plates - in central Pennsylvania, taken by Landsat 8 on 9 November, 2020, with a digital elevation model to highlight the topography of the area.

The mountains are part of a unique geological region of the Appalachian Mountains, known as the Valley and Ridge province, which stretches from New York to Alabama. As well as showing off the unusual shapes of the mountains, this natural-color image also reveals the autumnal palette of colors created as leaves turn red and begin to fall from deciduous trees, according to the Earth Observatory.

This stunning natural-color image of an algal bloom surrounding the western Jason Islands, an archipelago in the South Atlantic Ocean, was taken by Landsat 8 on 18 October, 2020.

The milky blue swirls are caused by the rapid growth of photosynthetic algae, which thrive in the nutrient-rich waters that have been enriched by the Malvinas Current – a spin-off of the Circumpolar Current of the Southern Ocean, which draws up nutrients from the deep ocean, according to the Earth Observatory.

This striking aerial photo of the blood-red Lake Natron in Tanzania was taken by Landsat 8 on 6 March 2017. Lake Natron is an alkaline lake. The dramatic color is fueled by molten mixtures of sodium carbonate and calcium carbonate salts from nearby volcanoes that enter the water via hot springs.

With temperatures averaging 104 degrees Fahrenheit (40 degrees Celsius) and less than 19.7 inches (500 millimeters) of rainfall a year, it is one of the harshest environments on Earth, according to the Earth Observatory.

Icy art in the Sannikov Strait

This fascinating photo of the Sannikov Strait – a body of water sandwiched between the New Siberian Islands north of mainland Russia – was taken by Landsat 8 on 5 June 2016.

The strait connects the Laptev Sea to the west with the Siberian Sea to the east; the strait remains covered in ice for the majority of the year, Live Science previously reported. This photo shows the ice sheet breaking apart during the summer melt and creating a picturesque panorama of icy puzzle pieces.

This colorful array of cuboids found in the Salar de Atacama – a salt flat surrounded by mountains in Chile – is actually the world’s largest lithium plant, photographed by Landsat 8 on 4 November 2018.

Lithium is the main component of batteries needed to power our cars, cellphones, laptops and other rechargeable gadgets.

This plant pumps lithium-rich brine from below the surface and diverts it into evaporation pools, where the sun evaporates the water away, leaving pure lithium. The different colors are a result of the varying stages of the evaporating process, according to the Earth Observatory.

Archaeologists May’ve Discovered The ‘Oldest’ And ‘Most Complete’ Egyptian Mummy Yet
Bacteria Can Use Plastic Waste as a Food Source, Which Isn’t as Good as It Sounds
Ripples in Space-Time Could Actually Reveal When Time Began
Scientists Create Shapeshifting Humanoid Robot That Can Liquefy And Reform
Tiny Radioactive Object Goes Missing in Australia, Sparks Urgent Search