A compact device that uses waste heat shed by solar cells to purify water could one day change the lives of hundreds of millions of people around the globe.

The new spin on old technology from King Abdullah University of Science and Technology in Saudi Arabia promises to ease increasing pressures on the nexus point between water and energy that threatens our future.

These two resources are conveniences many of us take for granted. But more than 780 million people around the world currently lack easy access to clean water. Even more people don’t have electricity at the flick of a switch.

Missing out on water and electricity not only puts communities at direct risk of illness through contamination, it makes it harder to grow crops, raise livestock, or maintain stocks of food and medicine.

Perhaps even more importantly, there’s the Catch-22 relationship between clean water and electricity we rarely give much thought to.

Limited access to relatively fresh water makes it impossible to efficiently generate the steam required for power on an appreciable scale. And without a convenient source of power, water can be harder to decontaminate or even reach in the first place.

Fields of solar panels can bring electricity to populations in remote, dry places. But hosing them down with water is a good way to keep them clear of dust, which is not easily done in such arid locations.

With two birds to kill, researchers behind this latest project realised they could solve both problems by creating a photovoltaic cell that uses sunlight as both a means to generate electricity and distil water.

To be useful, though, such devices need to be compact and affordable, leaving plenty of room for improvement.

The engineers of this latest device designed their cell with efficiency in mind, folding the components for distillation under a fairly standard silicon photovoltaic cell in a way that doesn’t impact on the cell’s energy output.

Just over 10 percent of the sunlight collected by their photovoltaic cell on a clear day goes towards generating an electrical current, an efficiency that isn’t too far behind conventional solar technology.

A fraction of the remaining solar radiation becomes thermal energy, which would usually go to waste. That heat is instead absorbed by a pancake-like stack of hydrophobic membranes shuffled between materials selected to assist evaporation and condensation.

Heat forces water to turn into vapour as with any solar still. But as it condenses, the heat energy is passed down into lower membranes for the process to repeat, making for a higher rate of distillation.

By stacking the membranes this way, the researchers found they could improve on conventional solar stills, potentially producing about five times the amount of clean water. 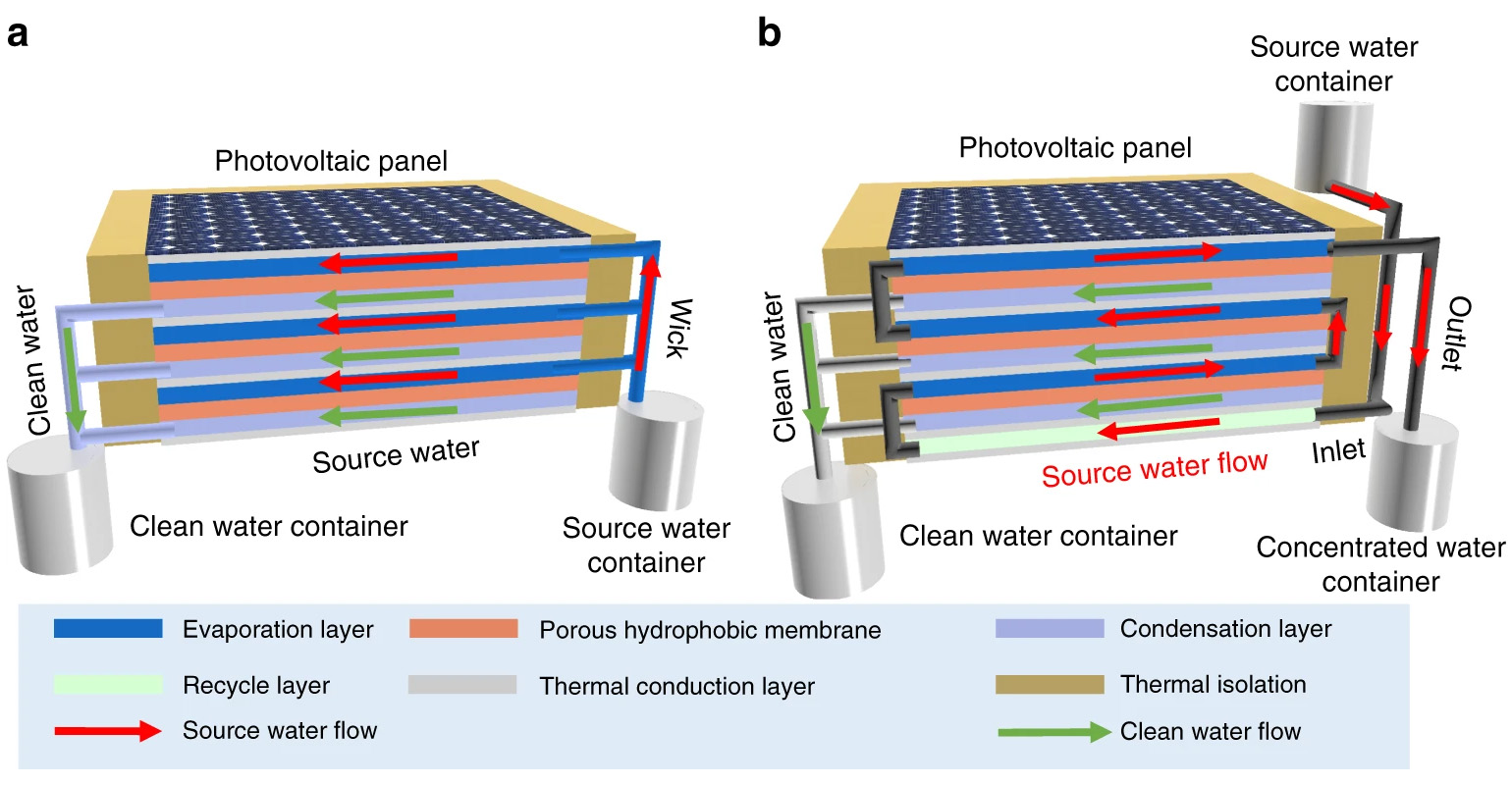 Just a single square metre of this multi-stage membrane distillation device was shown to distil more than 1.6 litres of seawater per hour, all without compromising the amount of electricity being produced by the photovoltaic cell on top.

Last year, solar energy accounted for more than 500 gigawatts of the world’s electricity. By 2025, the researchers think we might come close to doubling this figure.

That’s good news, but to achieve it we’re going to need around 4 billion square metres of land. Doubling it up with distillation membranes could theoretically clean the equivalent of 10 percent of 2017’s drinking water.

It’s an exciting idea, if it scales. The next step for the research team is to investigate ways to push the boundaries on the device’s efficiency and affordability.

The interdependence between energy and water wages a heavy price on technologies that can potentially solve the problems of communities in need.

For example, desalination also has the potential to service large populations, but only if the energy is available. In 2016, sea water contributed 3 percent of the freshwater in Middle Eastern nations, but required 5 percent of its electricity to make palatable.

What’s more, the power required to separate out that salt demands a fraction of the very fresh water it produces.

With the US looking down the barrel of major water shortages in coming decades, the water-energy nexus will hit home like never before.

Some People May Make Extreme Snap Judgements About You Thanks to Face-ism
Grim Study Shows 10 Years of ‘Carbon Offsets’ in California Had No Climate Benefit
SpaceX Is Preparing to Launch The World’s First Private Lunar Lander
Giant Asteroid Unleashed a Devastating Martian Megatsunami, Evidence Suggests
Psychologists Found a Weird Trick That Changes How Food Tastes