If you’re eagerly awaiting the next generation of personal transport, we’ve got some good and bad news. The good news is you can now order your very own hoverbike for delivery in the first half of 2019; the bad news is it’ll cost you an estimated US$150,000.

The Hoverbike S3 is manufactured by Californian company Hoversurf, and has been through several prototype stages to the point of actually going on sale. Apparently, it keeps you aloft with four spinning rotor blades on top of a carbon fibre body.

Should you be able to afford the asking price, the electric hoverbike can propel you at up to 96 kilometres-per-hour (60 mph), at a “safe flight altitude” of 5 metres or 16 feet.

According to the company, you get between 10-25 minutes of flying time per battery charge, depending on weather conditions… and how light you are. 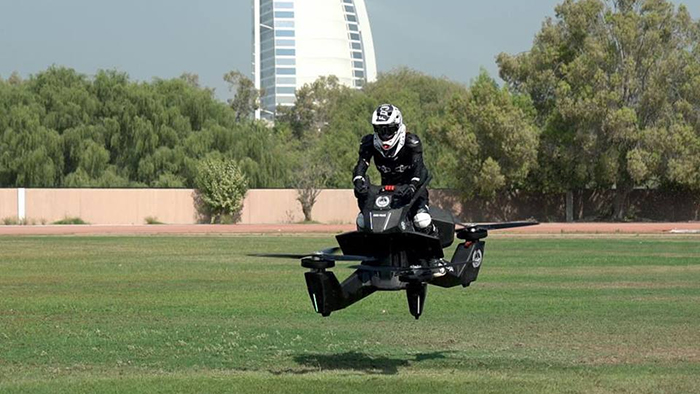 “It looks frightening at the beginning, and you’re unsure,” Hoversurf chief operating officer Joseph Segura-Conn told Tom Metcalfe at NBC. “But as soon as you get up in the air, there’s no experience like it.”

As the contraption floats just a short way into the air, you don’t need a pilot’s licence or even a motorcycle licence to operate one, though the company says extensive training will be given to all buyers. Control is primarily via a pair of joysticks on the front console.

Weighing in at 114 kg (253 pounds), the Hoverbike S3 passes the safety guidelines set down by the Federal Aviation Administration (FAA) in the US.

Hoversurf already has an interested buyer in the form of the Dubai police, as you can see from the training video below. The Dubai force wants the vehicles deployed by 2020, USA Today reports, to enable officers to reach spots that are hard to access on foot or by car.

Check out the bike in action:

And Hoversurf isn’t the only company making these eVTOLS (electric Vertical Take-off and Landing Vehicles). We seem to be approaching a tipping point where the technology is finally becoming practical and affordable enough to be a genuine commercial proposition – even if the asking price remains rather high.

Companies including Aerofex, Malloy Aeronautics, Ehang, and Volocopter all have eVTOLs in development at various stages. As well as being a futuristic way of getting from A to B, these vehicles could also help cut congestion and greenhouse gas emissions in cities.

“There’s lots of different configurations: people with external rotors, ducted fans, wings, no wings, tilt wings, tilt rotors,” Tim Robinson, editor of Aerospace magazine, told CNN. “No one knows exactly how it’s going to pan out or who is going to be successful.”

Meanwhile the dream of the flying car remains alive as well – DeLorean Aerospace is one of the companies working on an actual flying car, as is Hoversurf, once it’s successfully launched its hoverbike (just don’t tell Elon Musk).

Safety will be a priority for these companies at the cutting edge of eVTOL tech, and Segura-Conn says the computer system on board the Hoverbike S3 has the ability to automatically avoid obstacles and people. Future versions will fly for longer and have their propellers enclosed in a casing, Hoversurf says.

In the meantime, watch where you’re going while you’re enjoying the fruits of your US$150,000 investment – lest you do some serious damage.

“I think it’s a good idea assuming that it can be made safe, which is questionable in my mind,” aerospace engineer Richard Anderson, from Embry-Riddle Aeronautical University in Florida, told NBC. “I assume if you ran into somebody it would chop them up.”