Scientists have isolated and harnessed that rarest of things – an organic blue food coloring found in nature – and figured out a way to produce it at scale.

The discovery, made by an international team of scientists working across different fields, means that for the first time blue and other-colored foods may not have to rely upon synthetic dyes to give them their vibrant hue.

“Blue colors are really quite rare in nature – a lot of them are really reds and purples,” says biophysics researcher Pamela Denish from UC Davis.

While it’s probably not something most people spend much time thinking about, the fact remains that the majority of blue-colored foods, medicines, and cosmetics are the result of two widely used artificial colorings, known as FD&C Blue No. 1 (aka ‘brilliant blue’) and FD&C Blue No. 2 (aka ‘indigotine’). 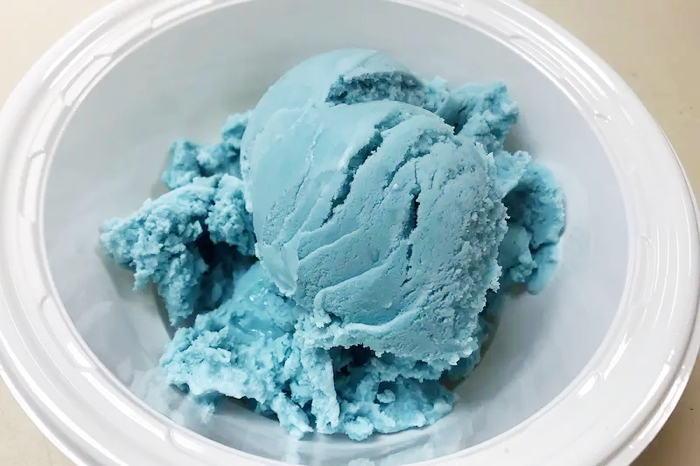 These two synthetic chemicals are great at making the colors of blue and green foods pop, but while they’re generally deemed safe by food authorities, questions have been raised about the potential health effects of artificial dyes, and also the sustainability of their manufacture.

For these reasons, the scientific search for naturally occurring blues that can be repurposed in foods – and of a quality to rival the brilliant synthetic dyes – has been a painstaking endeavor. (Crafty people can also make a natural blue food coloring at home using red cabbage, but it’s quite an involved process with varying results.)

“Despite a long history of exploration, blue remains one of the most challenging colorants to obtain from any source and even more so from natural, edible sources,” Denish and her co-authors explain in their new paper.

“Blue is critical as it is necessary to produce other colors across the palette… Achieving a cyan blue from natural sources that could be used as replacement for FD&C Blue No. 1 enabling a broader color palette has been a long-standing challenge to the food industry.”

Now, however, all that hard work appears to have paid off. In the new research – a collaboration roughly a decade in the making – the researchers isolated a naturally occurring blue dye called an anthocyanin in red cabbage.

Unfortunately, the anthocyanin chemical in question, called Peak 2 (P2), only occurs in small amounts in red cabbage, in total accounting for less than 5 percent of red cabbage’s overall anthocyanin content.

As it happens, though, those other anthocyanins can be hijacked. After a comprehensive analysis of red cabbage chemical structures, the researchers deduced that the anthocyanins giving the red cabbage its redness might be influenced to become blue, much like P2, via exposure to a specific kind of enzyme.

Searching through vast public genomics databases to find such an enzyme, the researchers identified a catalyst capable of turning P6, P7, and P8 anthocyanins in red cabbage into blue versions of themselves.

They then tweaked this enzyme, creating a mutant version that can trigger the formation of cyan blue anthocyanins with high efficiency – and which is capable of creating stable, naturally sourced blue and green-colored pigments in a range of foodstuffs, such as the blue ice cream seen on this page.

While exhaustive safety testing will need to be conducted before we’ll be eating anything like that ourselves made from this red cabbage derivative, the proof is in the pudding, as it were.