Greenhouses fitted with semi-transparent solar cells can generate electricity without affecting the growth and health of the plants inside, according to a new study, suggesting we could build energy-neutral greenhouses without harming crops.

Researchers tested groups of red leaf lettuce under different types of glass and different wavelengths of light, keeping all other variables the same – including temperature, CO2 concentration, and supplies of water and fertilizer.

The lettuce grown under solar cells showed no major difference in any key measurement, including antioxidants, CO2 absorption, size, and weight. As a bonus, the solar panels helped regulate the temperature of the greenhouse, too. 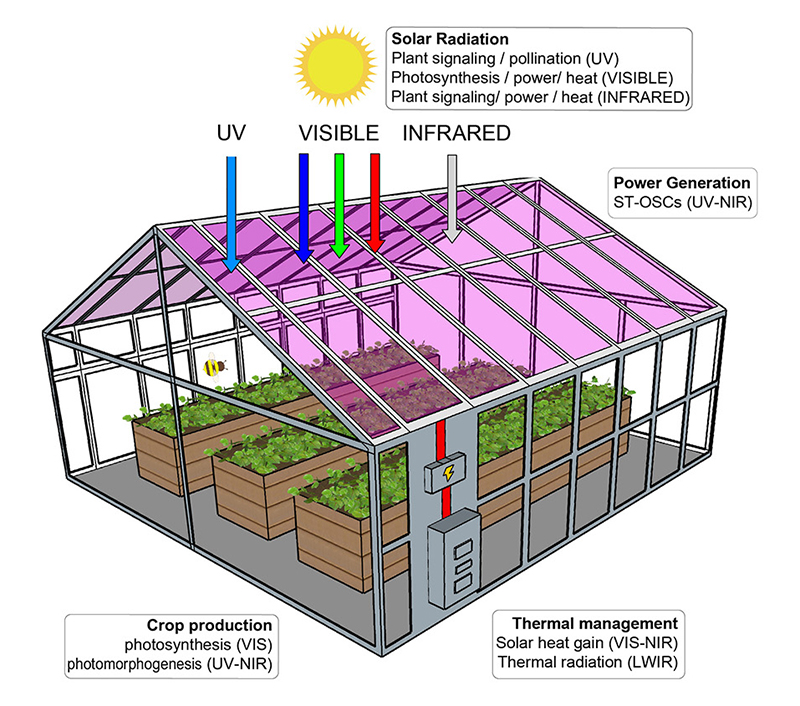 “We were a little surprised – there was no real reduction in plant growth or health,” says plant biologist Heike Sederoff from North Carolina State University. “It means the idea of integrating transparent solar cells into greenhouses can be done.”

The solar panels in this case are semi-transparent organic solar cells (or ST-OSCs) rather than the more traditional silicon-based type used in vast solar energy farms. It’s hoped that one day the same tech could even be used in the windows of buildings.

Part of the promise of ST-OSCs lies in their flexibility. They can be tuned to absorb different wavelengths of light as required – the wavelengths that plants don’t need for photosynthesis, in this particular piece of research.

While one lettuce control group was exposed to the full spectrum of white light, three other groups were grown under different light filters, simulating varying types of ST-OSC absorption and with the ratio of blue light to red light adjusted in each filter.

That’s promising for the future application of ST-OSCs: While greenhouses have many advantages, they can require more energy than other types of farming, not least to regulate the internal temperature. Transparent and semi-transparent solar cells could help here.

While ST-OSCs don’t have the same sunlight-to-electricity conversion rates as conventional photovoltaic cells, they’re improving in this regard all the time, and they could eventually be deployed in many different scenarios.

The next step towards solar-powered greenhouses is to test the technology with plants and crops other than lettuce – tomatoes are apparently next in line – but these first findings are promising in terms of plant health and growth.

“Based on the number of people who have contacted me about solar-powered greenhouses when we’ve published previous work in this space, there is a lot of interest from many growers,” says O’Connor.

“I think that interest is only going to grow. We’ve seen enough proof-of-concept prototypes to know this technology is feasible in principle, we just need to see a company take the leap and begin producing to scale.”

The research has been published in Cell Reports Physical Science.

This Small Australian Marsupial Is Quite Literally Dying For Sex
Orcas Are Contaminated With a Forever Chemical Associated With an Unlikely Product
A Mysterious Whirlpool Appeared Over Hawaii, And It Could Be Because of SpaceX
AI Predicts We’ll Breach Our Climate Goal in Just 10 Years
Scientist Accidentally Discovers The Oldest Brain of Any Vertebrate