Worms may not have spines, but they’re doing some back-breaking sewer work in more than 4,000 toilets across India.

Since 2015, a creative new type of toilet called the Tiger Toilet has been popping up outside homes and schools around the country.

From the outside, this toilet looks like any other pit latrine. But it doesn’t smell like one. Instead, it comes with a built-in population of tiger worms.

“Their natural breeding, natural habitat is in cow dung heaps, or horse sh*t heaps, that kind of thing,” Ajeet Oak, director of the Tiger Toilet company, told Business Insider. “Poop. That’s where they like to live.”

The toilets involve no traditional flushing and aren’t hooked up to a sewer system. Instead, the worms are contained in a container below the toilet, and they feast on faeces.

The creatures’ activity leaves behind a mix of water, carbon dioxide, and a small amount of wormy compost (that’s technically the worms’ poo, though it’s much less toxic and more nutrient-rich than ours).

The resulting water isn’t clean enough to drink, but it “can go into the ground and it sort of gets filtered naturally from there on,” Oak said. No wastewater treatment plant needed. 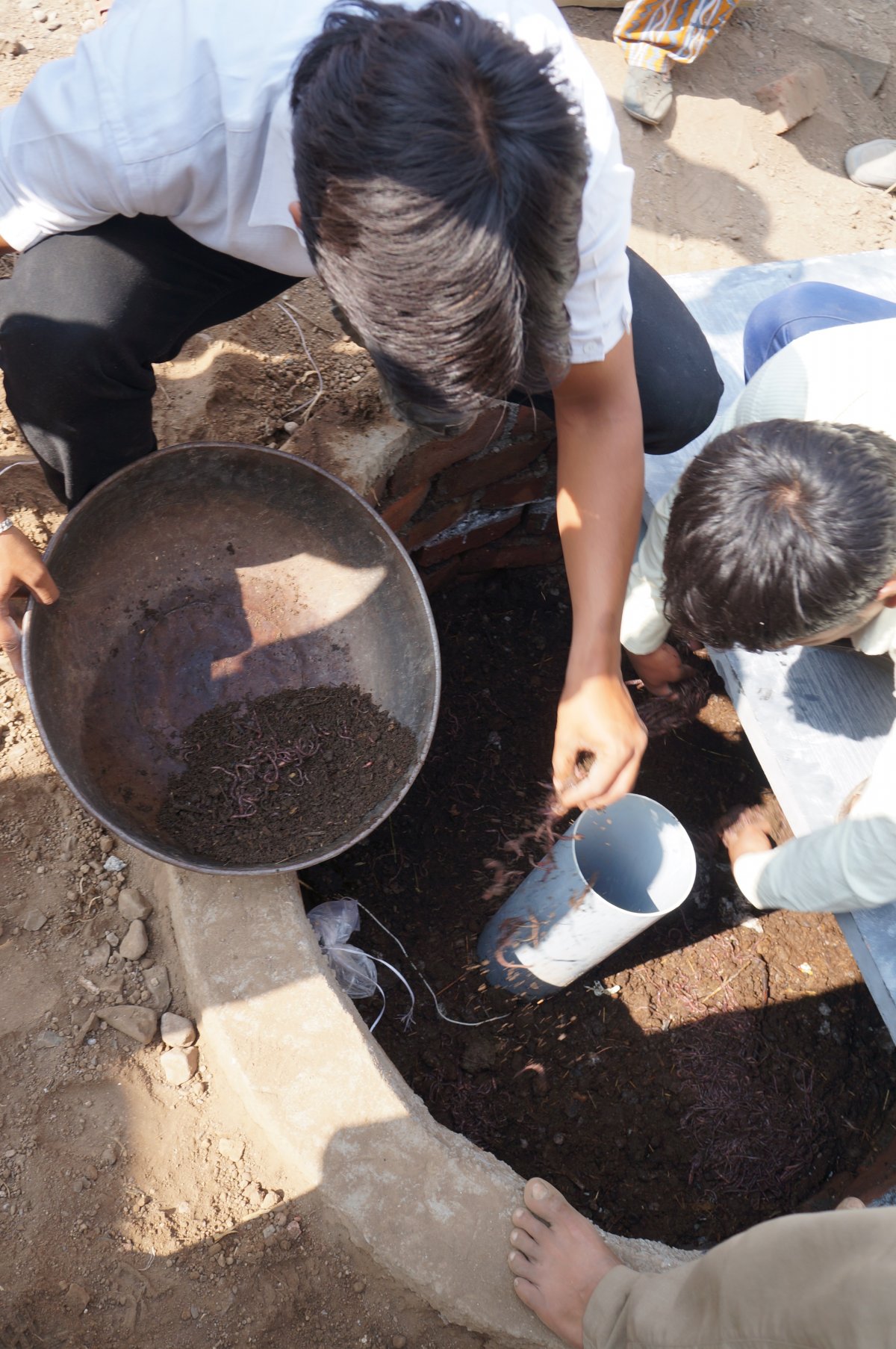 To get the worm system to market, The Bill and Melinda Gates Foundation awarded at least US$4.8 million in grant money to the London School of Hygiene and Tropical Medicine to perfect the technology.

Tiger Toilets also received US$170,000 for initial testing in India, Myanmar and Uganda from USAID. Now, after years of development and field testing around the world, the technology is finally reaching people who need it most.

“These are people who are getting toilets for the first time,” Oak said, adding that before getting a Tiger Toilet, “they would go out in the field.”

Bill Gates recently told a crowd in Beijing that he’s ready to spend an additional US$200 million developing technology for next-generation toilets like these that can operate without mainframe sewer systems.

“We estimate that by 2030, the opportunity here is over US$6 billion a year,” Gates said.

Tiger worms, or Eisenia fetida if you prefer the scientific term, are animals that love to eat waste. This makes them a perfect composting solution, and they especially love what falls into their Tiger Toilet compartment.

“These worms, they won’t escape on their own, because they won’t survive in just soil,” Oak said. They need our human waste to live.

The Tiger Toilet system costs about US$350 to install and requires no connection to drainage pipes or a mainline sewer.

Once a person does their business in the toilet, they send their waste down into the worm-filled compartment below using a pour-flush system, usually with a little bucket of water. (There are no handles or automatic flushing devices in the Tiger Toilet.)

The toilet’s cleaning stats are impressive: they process faeces, remove 99 percent of the pathogens, and leave behind no more than 15 percent of the waste by weight, in the form of compost material.

The rest becomes water (around 60-70 percent) and carbon dioxide. That’s better performance than a septic tank.

Plus, the leftover byproduct makes for “excellent fertiliser,” Oak said, because its mix of nitrogen, phosphorous, carbon, and potassium is good for growing plants.

Tiger Toilets (and Tiger worm-powered treatment plants, like the one pictured below) also don’t breed mosquitoes or attract other flying menaces.

“Users find the toilets preferable to traditional latrines,” USAID wrote of the toilets during field testing in 2015.

“Because the worms break down the solid waste, the toilets emit fewer odours and attract fewer flies than traditional latrines.”

The earliest editions of Tiger Toilets are now more than five years old and their worm compartments haven’t needed any maintenance yet – the slimy creatures are still chomping away.

Eventually, after about eight to 10 years, the company expects some toilet maintenance to be required. At that point, the worm bin, which isn’t visible to toilet users, must be emptied.

It’s not a terrible job – “you don’t have to handle sludge,” Oak said.

Simply remove the lid of the toilet, exposing the top layer of worm castings – their leftovers from years of hard work. Then shovel it out and use it in a garden as fertiliser. Then the worm population will be ready to work again.

The tiny worms that make their home in filth are performing a lifesaving task for humans.

Across the developing world, people without a safe place to go to the bathroom can die because of unsanitary conditions. Diarrhoea kills 525,000 children under five annually around the world “as a result of poor hygiene,” according to the World Health Organisation.

Improper hygiene also causes the global economy to miss out on an estimated US$223 billion USD per year.

Additionally, open defecation can be a dangerous situation for women. A 2016 study in India found that women who defecate in the open are twice as likely to be sexually assaulted by a stranger as those who have a toilet in their house.

In India, millions of people relieve themselves outdoors on a daily basis – 40 percent of the country’s population, according to the World Bank’s estimate from 2015.

The country has set a “Swachh Bharat Mission” goal of becoming open-defecation free this year, but it’s unlikely to be fully successful, since even people who can access a toilet don’t always use it.

A 2018 survey of more than 9,800 people and 150 local government officials across India found that one in four people in rural northern provinces have access to latrines but don’t use them.

Some people choose to relieve themselves in the open for compelling reasons. An Indian woman identified only as “Veer” told Meenakshi Dalal, a program and communications specialist with USAID/India, that men block the way to her community toilet, taunting and harassing women.

“They dress up as women, they get in line with us, they might touch us,” Dalal recalled Veer telling her. “Every few days someone is raped. On one side of the toilet is where we live and on the other side it’s jungle. They can pull us there.”

Tiger toilets is testing out some options for crowded slums like Veer’s – a kind of downsized, city-friendly version of the worm toilet – but they’re not ready yet.

“The challenge is to have something for a family which can be put in a very small house,” Oak said. “We’re calling it the Urban Tiger Toilet.”

India’s government has also started offering cash incentives to people who install toilets in their homes, which makes a Tiger Toilet even more affordable for families who are getting their first toilet.

Bringing worm toilets to the world

Lixil Group, the parent company that owns toilet-industry giants American Standard and Grohe, is also interested in Tiger Toilets. The company recently signed a letter of intent to bring Tiger Toilets to scale.

“Eventually we want to have something that’s really sleek and you can place anywhere,” Daigo Ishiyama, Lixil’s marketing and technology director, told Business Insider.

But he said that will take some time: “We’re dealing with living creatures – you know, worms.”

Still, this kind of game-changing new invention – a toilet that requires no traditional sewer system – is an exciting prospect for Gates. He has even compared it to the invention of the personal computer.

“A whole new product category is being introduced here,” he said.

Wildfire Destruction in The Western US Has Doubled in Just 10 Years
This Small Australian Marsupial Is Quite Literally Dying For Sex
Archaeologists May’ve Discovered The ‘Oldest’ And ‘Most Complete’ Egyptian Mummy Yet
New Prototype Device Generates Hydrogen From Untreated Seawater
Black Swans Could Be Entirely Wiped Out by a Single Virus, Scientists Warn