Scientists have created key parts of synthetic brain cells that can hold cellular “memories” for milliseconds. The achievement could one day lead to computers that work like the human brain.

These parts, which were used to model an artificial brain cell, use charged particles called ions to produce an electrical signal, in the same way that information gets transferred between neurons in your brain.

Current computers can do incredible things, but this processing power comes at a high energy cost. In contrast, the human brain is remarkably efficient, using roughly the energy contained in two bananas to do an entire day’s work.

While the reasons for this efficiency aren’t entirely clear, scientists have reasoned that if they could make a computer more like the human brain, it would require way less energy.

One way that scientists try to replicate the brain’s biological machinery is by utilizing the power of ions, the charged particles that the brain relies on to produce electricity.

Related: Inside the brain: A photo journey through time 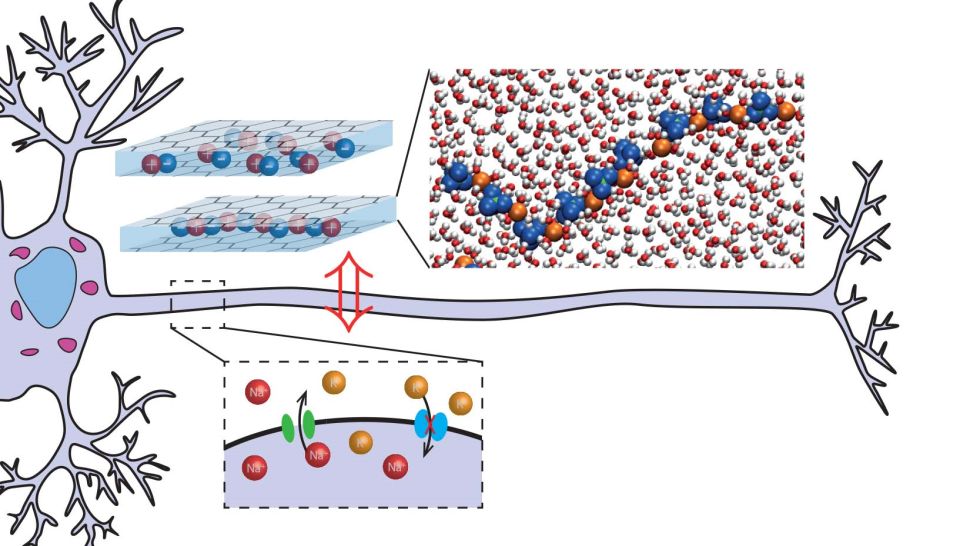 Above: The researchers’ artificial neuron prototype.

In the new study, published in the journal Science on Aug. 6, researchers at the Centre national de la recherche scientifique in Paris, France, created a computer model of artificial neurons that could produce the same sort of electrical signals neurons use to transfer information in the brain; by sending ions through thin channels of water to mimic real ion channels, the researchers could produce these electrical spikes.

And now, they have even created a physical model incorporating these channels as part of unpublished, ongoing research.

“To my knowledge, it’s the first time that people [have done] this with ions,” said study co-author Lydéric Bocquet, a physicist at the École Normale Supérieure.

At a finer level, the researchers created a system that mimics the process of generating action potentials – spikes in electrical activity generated by neurons that are the basis of brain activity. To generate an action potential, a neuron starts to let in more positive ions, which are attracted to the negative ions inside of the cell.

The electrical potential, or voltage across the cell membrane, causes doorways on the cell called voltage-gated ion channels to open, raising the charge even more before the cell reaches a peak and returns to normal a few milliseconds later. The signal is then transmitted to other cells, enabling information to travel in the brain.

To mimic voltage-gated ion channels, the researchers modeled a thin layer of water between sheets of graphene, which are extremely thin sheets of carbon. The water layers in the simulations were one, two, or three molecules in depth, which the researchers characterized as a quasi-two-dimension slit.

“In physics, two dimensions is very weird,” said Bocquet. “So you expect new things to occur.”

Testing out the model in a computer simulation, the researchers found that when they applied an electric field to the channel, the ions in the water formed worm-like structures.

As the team applied a greater electric field in the simulation, these structures would break up slowly enough to leave behind a “memory,” or a hint of the elongated configuration.

When the researchers ran a simulation linking two channels and other components to mimic the behavior of a neuron, they found the model could generate spikes in electrical activity like action potentials, and that it “remembered” consistent properties in two different states – one where ions conducted more electricity and one where they conducted less.

In this simulation, the “memory” of the previous state of the ions lasted a few milliseconds, around the same time as it takes real neurons to produce an action potential and return to a resting state.

This is quite a long time for ions, which usually operate on timescales of nanoseconds or less. In a real neuron, an action potential equates to a cellular memory in the neuron; our brains use the opening and closing of ion channels to create this kind of memory.

“We have similar memory in the end, but the reason for the phenomenon is very different,” Bocquet said.

The new model is a version of an electronic component called a memristor, or a memory resistor, which has the unique property of retaining information from its history. But existing memristors don’t use liquid, as the brain does.

“The typical memristors that I work with, and other people in the literature work with, are solid-state memristors,” said Gina Adam, an assistant professor of electrical and computer engineering at George Washington University, who was not involved in the study. This new research on creating fluid memristors is “very promising and very intriguing,” Adam added.

She also said that while practical brain-like computers are likely a long way away, this research could also help scientists better understand how the brain processes information and develop new theories of brain-like computing.

Since conducting this research with computer simulations, Bocquet says he and collaborators at the University of Manchester in the UK have brought their theory to life, using it to create an artificial synapse, the part of a neuron that passes on electric signals, and they have started performing experiments with it.

“It’s exciting because it’s a playground now,” Bocquet said. “We can explore these things actively.”

Dogs Can Be Aggressive For Lots of Reasons, And One of Them Is You
Intriguing Meteorite From Mars Reveals ‘Huge Organic Diversity’, Scientists Say
A 17th-Century Aristocrat Had a Crafty Secret For Keeping Her Teeth
Could ‘The Last of Us’ Ever Happen? The Real Risks of a Fungus Pandemic
Mysterious White Clouds Keep Popping Up Near The Bahamas, And No One Knows Why